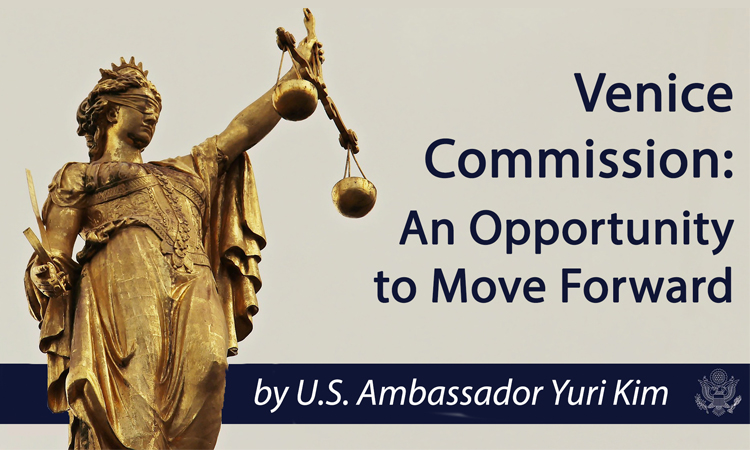 This week, I had a chance to visit Kruja, the fortress of Albania’s hero, Skanderbeg.  Facing attack after attack by the most formidable military force in the world at that time, Skanderbeg did not surrender.  Instead, he united the country, refused to give up, and in the end prevailed against all odds.

Four years ago, Parliament – in response to the demands of the Albanian people – adopted Justice Reform.  Despite the odds, implementation has made real progress: most of the required institutions have been established, vetting has removed judges and prosecutors who cannot explain their wealth, and new judges and prosecutors are being trained and hired.  Justice Reform has been painful, slow, and imperfect, but it is moving forward and must continue so that Albania can secure its future as an even more valuable member of NATO and a full member of the European Union.

After four years of facing numerous obstacles, it is natural to feel tired and perhaps discouraged.  But if we review what has been gained despite the obstacles – and what more should be gained for the next generation – then this is exactly the moment we must redouble our efforts and push ahead toward our goal.

The recent Venice Commission opinion on Albania’s appointment of judges to the Constitutional Court provides an opportunity for all sides to come together to advance Justice Reform.  It is not an occasion for accusations or victory dances. No one institution was entirely at fault. No one institution was entirely right or wrong.  The Venice Commission acknowledges that there are different, legitimate interpretations of the legal provisions which “resulted in two judges being arguably appointed” to the same Constitutional Court seat.

Importantly, neither the Presidency nor the Parliament is a court with the authority to decide how to proceed when there is a gap in the legislation. The Venice Commission points out that “It is for a Constitutional Court to decide on the interpretation of the provisions of the Constitution in a situation not foreseen during the drafting process.” This advice highlights the urgency of establishing a functioning Constitutional Court as soon as possible.

Rather than staying mired in their positions, it is now the responsibility of Albania’s leaders to follow the clear advice of the Venice Commission: “Democratic culture and maturity require institutional restraint, good faith and mutual respect between State institutions.”

The Venice Commission opinion opens a path forward. With the current justices remaining in place, it is possible for the court to achieve quorum in 2020. The Presidency and the Parliament must engage in dialogue before they receive candidate lists for appointments.  Once again there must be shared understanding of implementation to harmonize any diverging interpretations of the law.

Recalling the example of Skanderbeg, the U.S. Embassy agrees with the Venice Commission: In the face of corruption and injustice – our common enemy at the gate – the people of Albania must unite, and leaders must deliver on their obligation to ensure that the Constitutional Court is functional, to give the people the Justice Reform that is rightly due to them, and to secure the future of Albania.