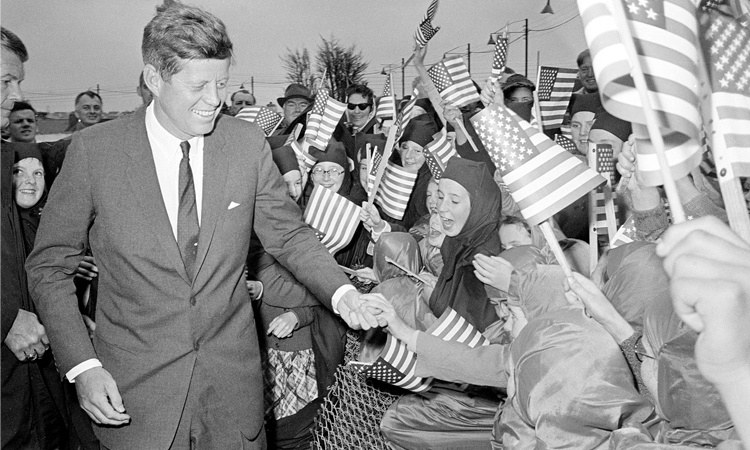 The Department of State pays tribute to the memory and legacy of President John Fitzgerald Kennedy on the centennial of his birth in Brookline, Massachusetts in 1917.

President Kennedy pursued a foreign policy based on American strength, a commitment to human freedom and human dignity and the determined use of diplomacy to advance our country’s interests and the cause of peace during a challenging time in our history.

He was a resolute defender of human freedom in an embattled and divided Berlin at the height of the Cold War when he rallied that city’s citizens by proclaiming that he was with them, that he too was a Berliner.

He proclaimed the importance of integrating diplomacy and defense as the surest way to protect our country against the many dangers of the early 1960s. He said memorably, “Let us never negotiate out of fear. But, let us never fear to negotiate.”

His wisdom and courage led us back from the precipice of nuclear war during the Cuban Missile Crisis. He concluded that “Mankind must put an end to war before war puts an end to mankind”.

President Kennedy also led through the power of hope in establishing the Peace Corps, the Alliance for Progress and in advancing economic development initiatives for new countries in Africa and other parts of the developing world as colonialism mercifully ended.

For the men and women of the State Department and USAID, perhaps his greatest contribution was his belief in the necessity and the nobility of public service. Following his luminous Inaugural address when he challenged his fellow citizens to “Ask not what your country can do for you but what you can do for your country”, thousands of young Americans committed themselves to a life of service, many in our department. His legacy endures in the careers of our Foreign and Civil Service Officers today in Washington and in our embassies and consulates around the world.

As we look back at the thousand days of his Presidency, we also honor President Kennedy’s dream of peace for Americans and people everywhere. In one of his most visionary speeches– the American University commencement address in June 1963–Kennedy told graduates: “I realize that the pursuit of peace is not as dramatic as the pursuit of war….But we have no more urgent task.”

And, in that same speech, he urged Americans and people everywhere to cast aside the distrust and threats of the Cold War and to work together for a more cooperative global future.

“For in the final analysis”, he said, “Our most basic common link is that we all inhabit this small planet. We all breathe the same air. We all cherish our children’s future. And we are all mortal.”

We at the State Department remember and honor President Kennedy’s extraordinary service to the United States of America a century after his birth.