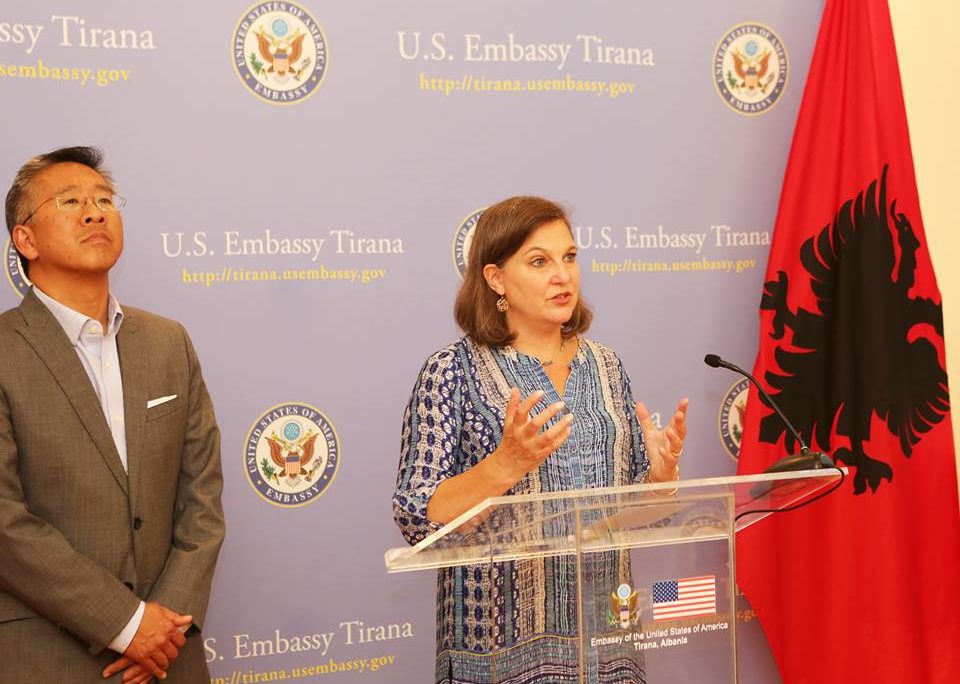 Assistant Secretary of State Victoria Nuland and Ambassador Lu at a press stand-up with Albanian journalists.

A/S Nuland: Good evening everybody. It’s terrific to be back in Tirana in mid-summer. We’re going to make this quick because it is Euro Cup Final’s night and I know you all want to get to your televisions. This is my fourth visit to Tirana since I have been Assistant Secretary. I have obviously been here more than a dozen times over my career. The United States has been enormously proud to be a partner and ally of Albania for these almost 20 years that you’ve been on a democratic trajectory across three U.S. administrations. Albania has a special place in my heart because I was U.S. Ambassador to NATO when Albania got into the Alliance so I’ve worked with you for a long time.

I think it is fair to say that this is another defining moment for Albanian democracy. The justice reform that the parliament is working on, and that government and opposition negotiators are working on, is vitally important for the health and the democratic strength of this country. It will make an essential contribution to ending the culture of impunity and ensuring that Albania has a justice system that truly works for the people of this country. And, as you know, 91% of Albanians are asking for judicial reform now. It’s also an essential step for Albania being able to take the next step in its accession talks with the European Union and the path to the EU.

Negotiators on both sides have worked very hard and the draft is very close to completion now. The United States along with the European Union has been very proud to try to facilitate this process, to help the negotiations and we are very proud of the work that Don Lu and our Embassy have been doing. In an effort to try help the sides close this last gap, Ambassador Lu and his EU counterpart, in the last 24 hours, have put forward a new proposal, which endeavors to bridge the distance. This is a hybrid proposal, which takes elements from government ideas and elements from opposition ideas and is fully compliant with Venice Commission recommendations. This proposal has my support; more importantly, it has the broad support of Washington and of our leadership. I reviewed it today in detail in my meeting with the Prime Minister and in my meeting with the leader of the opposition. I urged both of them, on behalf of Washington and on behalf of our colleagues in the EU, to try to join around this proposal in the coming days, because it is time to reach agreement – the Albanian people are waiting.

It’s a moment for all of Albania’s patriots to join forces and deliver for the people of this country what they deserve. And with strong justice reform, Albania can move forward on other things that are also important to your citizens and important in our relationship, including strengthening the economy, bringing jobs, bringing investment. The United States has been and will continue to be proud to stand with our ally Albania as you continue to strengthen your democracy and your path to Europe and your path to prosperity. Thank you all. I’m happy to take a few questions.

VOA: Ms. Nuland, until we see that this compromise is reached, we are entitled to being skeptical. My question is, in case this much-awaited compromise is not reached, according to you, what should the next step be, having in mind that in ten days the parliament is scheduled to vote this reform?

A/S Nuland: Well, you are right, time is short, which is why we are urging everybody to work very hard and we are doing our best to try to join the good ideas from both sides. I am an American; I am an optimist by nature, of course. And as you know, I work for the “Yes, We Can” President. So, again, we say to all Albanian patriots, and particularly, to the politicians, “You serve the people; let’s get to Yes, We Can!”

Top Channel: Did you hear from Lulzim Basha and Edi Rama [the response] “Yes, we can do it” and “Yes, we will do it?”

A/S Nuland: I can honestly say that in both my meeting with the Prime Minister and my meeting with the leader of the opposition, they both expressed the desire to come to an agreement to be together, and to present solid justice reform. It is not a secret to you all that politics is rough in this country, but I felt that they both know that it is a moment for leadership.

Klan TV: Ms. Nuland, could you please give us more concrete details about the proposal and about the international monitoring process – what will be its role in this process?

A/S Nuland: I think it is important to let the negotiators to have a little space to review. I would just repeat as I said at the outset this is a hybrid proposal that takes ideas that we have heard both from the government and from the opposition and it endeavors to bridge the gap. It is based on the very good, active listening that Ambassador Lu and his EU counterpart have been doing and it attempts to combine an appropriate level of international monitoring with a strong defense of Albanian sovereignty.

And with that I thank you all. Have a good evening. I apologize for disturbing your Sunday. Again, we are very hopeful that in the coming days Albanians can join together and we can move forward here. Thank you.