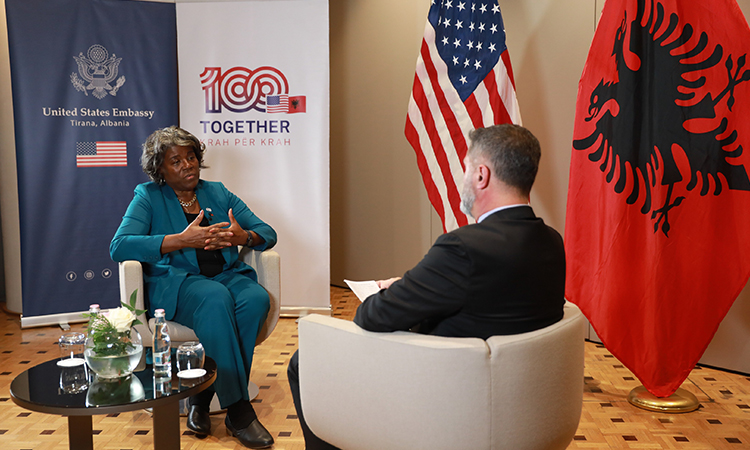 VOA: Ambassador Thomas-Greenfield, thank you for this opportunity. The world today is going through turbulent times, in which the Security Council is on the front line. However, you found time to come to Albania. What is the purpose of this visit, and what did you discuss with the Albanian authorities?

Ambassador Thomas-Greenfield: Well, first, let me just say Albania and the U.S. have had relations with each other for 100 years. So, we’re commemorating 100 years of the relationship. But more importantly, Albania is on the Security Council, and we engage with them on a regular basis. ‘We are with them, and they are with us,’ as Secretary Baker was quoted as saying on the plaza here many years ago. And that saying still stands. And I’m here to reaffirm that relationship, to thank Albania for being an extraordinary partner to us on the Council, and have discussions with members of the government about our priorities and our interests as we move forward over the coming year.

VOA: Russian aggression in Ukraine and the multiple consequences it causes are among the main issues today. Are you worried that Russia will object to renewing the grain deal, later this month?

Ambassador Thomas-Greenfield: That grain deal has been an important contributor to really dealing with some of the currents in the food security environment. Russia and Ukraine provide significant amounts of grain. More than 10 million metric tons of grain have gone through this quarter since this deal started. So, this is important. It’s an important accomplishment for the international community, particularly. I want to commend the Secretary-General for the extraordinary effort that he and his team made working with Turkey to forge this deal with Russia and Ukraine. The very temporary announcement by Russia of pulling out of the deal last week caused lots of friction in the market. So, our hope is that this [grain deal] will be extended. This grain deal is important to the Global South. It’s important to Ukraine. And it’s also important to Russia.

VOA: There is a discussion about removing Russia from the United Nations Security Council. Several suggestions have been made. What is the U.S. position on the matter and why?

Ambassador Thomas-Greenfield: Currently, our position is the reality. The reality is that Russia is a permanent member of the Security Council. We worked over the course of the past year to isolate them, to condemn them with several votes in the General Assembly, where they have been roundly condemned. And we will continue to put pressure on them until they are out of Ukraine.

VOA: There’s a concern that if the Republicans win a majority in Congress, they will cut support for Ukraine. How worried are you?

Ambassador Thomas-Greenfield: Look, I’m not going to comment on domestic politics, but what I will say is that the support for Ukraine has been bipartisan and the President will work with whatever Congress there is to ensure that we continue our commitment to the Ukrainian people.

VOA: How do you see the fact that Iran is supplying Russia with drones, which are being used in Ukraine?

Ambassador Thomas-Greenfield: The Iranian Foreign Minister admitted that they are providing these drones. They implied that they were only provided at the beginning of this and that they weren’t armed. The truth is that Iranian drones have been used to attack civilians in Ukraine, breaking Security Council resolutions that bar such a shipment of arms from Iran and also to Russia. So both countries are accountable for this. It shows that Russia has to depend on Iran to get its arms and that Iran is willing to provide arms to a country that has attacked its neighbor, a country that is a permanent member of the Security Council. It’s not the kind of behavior that we would expect from Russia. We’re not surprised by Iran. But again, this is breaking Security Council resolutions and it is something that we need to deal with in the Council.

VOA: The United States was recently engaged, together with Albania, in the case of protests in Iran. Vice President Kamala Harris declared a few days ago that the United States will try to remove Iran from the UNCommission on the Status of Women. How are you going to do it, and how difficult will it be?

Ambassador Thomas-Greenfield: Well, first of all, let me commend the courageous women of Iran who are standing up and protesting in the face of the horrific attacks that they are experiencing at the hands of their government and express, again, as we have before, our sorrow over the killing of [Mahsa] Amini. The decision that the Vice President announced last week is one that we will be working with other members of the Committee on the Status of Women to move forward. Iran does not deserve to be on this Committee. This Committee is about supporting women. It’s about supporting the human rights of women. And no country that attacks women, that is a country that is not honoring the human rights of women, should not be on this Council. We had a very successful, informal meeting in New York with Albania, where we condemned the attacks that are taking place in Iran. And that condemnation has come from a large number of countries who are seeing what is happening to the brave and courageous Iranian women and men who are protesting in the streets.

VOA: After the aggression of Russia in Ukraine, concern about Russian influence on the Balkans has increased. How worrying do you think is this influence and what can be done to contrast it?

Ambassador Thomas-Greenfield: You know, we had discussions over the course of the day today with the Albanian government on the situation in the Balkans. We support efforts to stabilize that situation. We just passed the resolution in the Security Council on the stabilization force to continue. And we’ll continue to work with countries in the region to push forward an agreement that will allow for peace in the region. And that’s something that we’re committed to and we’re committed to working with the Albanian government on.

VOA: Last question. What keeps you awake at night as UN Ambassador?

Ambassador Thomas-Greenfield: Oh, my goodness. It changes from day to day. But I would say the key thing that keeps me awake is that we have a permanent member of the Security Council who is really compromising and attacking a neighbor, really jeopardizing peace and security, and not honoring the position that they have been a permanent member of the Council. The impact that it is having on the question, I mean, the confidence of the world in the Security Council questioning our abilities to deal with this situation. I know that we’re dealing with the situation. I know that we’re isolating Russia, but I know that this means that we have to really ramp up our own efforts at Security Council reform and at how we address threats to peace and security in the future.

VOA: Ambassador Thomas-Greenfield, thank you very much for this interview.

Ambassador Thomas-Greenfield: Thank you. I’m delighted to be here with you.