Home Home | News & Events | Transcript of Interview with Under Secretary for Economic Growth, Energy, and the Environment Keith Krach with Angelo Haruni for A2 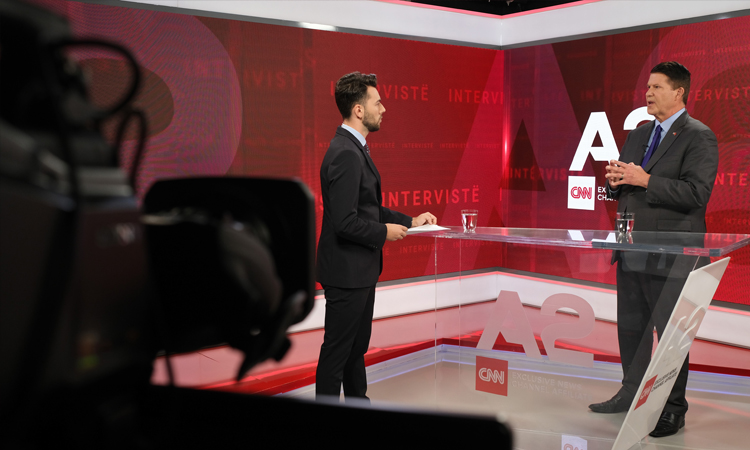 A2/CNN: The United States and Albania signed two very important Memoranda of Understanding, in the field of Economic Cooperation and the construction of the Skavica Hydro-Power Plant. Under Secretary for Economic Growth, Energy, and the Environment Keith Krach was in Albania to sign this agreement after a tour of meetings with different leaders throughout Europe. Under Secretary Krach, it’s an honor to have you here.

U/S Krach: Angelo, it’s great to be back on CNN. Thanks so much for having me.

A2/CNN: First, I’d like to start with your two-week tour in Europe. You’ve met several leaders, I believe in eight countries. What was the main topic of these visits and what are the findings?

U/S Krach: Right, So, eight different countries and also a lot of time with the European Union as well as NATO officials. And really, the main purpose was taking partnerships to the next level and in particular talking about the Chinese communist party’s real and urgent threat to democracies around the world. That led also to talking about 5G and the Clean Network, which is the U.S. and other nations’ comprehensive approach to address the long-term threat of data privacy, security, trusted collaboration, as well as human rights, as posed by the Chinese communist party and it’s rooted in internationally accepted digital trust standards built on a coalition of partners.

A2/CNN: So, back to Albania, back to the two agreements signed today. Do you believe they will help foster trade and maybe even further future investments from the United States to Albania?

U/S Krach: Yeah, I have no doubt in my mind. I think these are two monumental agreements and it will serve as a great catalyst. I talked about in the briefing with the Prime Minister that it is really a new chapter, an exciting chapter, to be able to do that and to be able to set a great example as well as drive a lot of private sector investment from the United States and also from other countries as well, into Albania.

A2/CNN: In this matter, there is maybe a sensitive issue. The Department of State, through concerns that are voiced by American investors in Albania, they voice some concerns especially with trade and doing business in Albania. They mention it as a difficult country to do business. Does the U.S. believe that the Albanian Government is taking appropriate measures to counteract this, especially in the fight against corruption?

U/S Krach: Yeah, by the way, we see the heart is willing we’re beginning to see some action. The key thing is what we would call clean courts as well as rule of law.  So if you look at what we’re doing is the global trust network. What that is, is that it is comprised of like-minded countries, companies, and civil society for all areas of economic collaboration, that operates under a set of trust principles like accountability, integrity, reciprocity, transparency, respect for rule of law, respect for property of all kinds, respect for sovereignty of nations, respect for the planet, respect for human rights, respect for religious freedom. So this is an important part of that.

A2/CNN: So, back to a matter that is special in your heart, the 5G security network. So, there is an upcoming agreement between Albania and the American Government in this field, the Clean Network Initiative, which is a recent Trump Government initiative to address long-term threats to countries. How will Albania profit from signing this agreement?

U/S Krach: First of all, I think Albania is recognized not only by the United States, but also by NATO, as a leader, one of the first to join the Clean Network and now, on the Clean Path. My time with NATO, I spent a lot of time with the Deputy Secretary of NATO, I want to make sure that NATO is not fractured in terms of trusted networks in some countries, untrusted in the other. The good news is that now over 20 of the NATO countries are clean countries, trusted, and also in a number of the countries that we visited, like Portugal, Spain, Germany, Austria, Luxembourg, they’re all on that path to be on the Clean Network. So, what it means for Albania is that you’re really recognized as a leader in this area and really have set the pace there. And if you look at what’s being accomplished is that Huawei is a tool for the Chinese communist party. It’s surveillance is an extension of the surveillance state. They’re used in the internment camps in Xinjiang, with millions of Uighurs and other Muslim groups, committing some of the worst human rights abuses. You know, I think that the Albanian people understand what we call China’s three-C doctrine of concealment, cooption, and coercion. And, they understand that the pandemic is the result of the concealment of the virus; they can see the cooption of Hong Kong and how the freedoms of its citizens were totally eviscerated. And they can see the coercion that’s going on in the facemask diplomacy. They can see the coercion going on in Xinjiang.

A2/CNN: Let’s remain in the China subject. In a recent letter, the U.S. President Donald Trump wrote to Albanian Prime Minister Edi Rama. He thanks him for exposing the malign ways that China acts through in the country and urges him to exit the 17+1 format. Has the Albanian Government expressed maybe a signal to do so and how can it persuade other countries from the region to do the same?

U/S Krach: By the way, I think, first of all, by an example. I know President Trump, with this letter, recognized the leadership of Albania and also recognizes that, when you look at the Three-Cs Initiative and the big conference that is coming up in less than a month, the objective is that all those countries are in the Clean Network. So, Albania’s looked at as a leader and also, Albania is not afraid to stand up to that China bully. It’s very clear to me after meeting the Prime Minister, and the Albanian citizens understand that another one of the doctrines of the Chinese communist party is to seduce with money and reinforce with intimidation and retaliation. They’re a bully. And, you know, we’ve all had experiences, no matter where you grew up, with bullies. What I know is when you confront a bully, they back down. And they really back down if you have your friends by your side.

A2/CNN: So, let’s stick to the region. Back in September, Kosovo and Serbia signed, I must say, a historic agreement, a U.S.-brokered agreement for economic normalization between the two countries. There is also talks of a Mini-Schengen area in the Western Balkans region. Do you believe that these two initiatives will bring prosperity and maybe long-sought peace in the region?

U/S Krach: Well, the one thing that I do believe, in terms of running economic diplomacy for the United States, and my charge is to develop and operationalize a global economic security strategy that drives economic growth worldwide, that combats China’s economic aggression, maximize national security for all countries, but most of all, to advance prosperity that leads to peace. I think that’s a magic formula and I think one of the things that I’ve realized since I’ve been in government is that there is no sustainable prosperity without liberty. So I think this is a great start and to bring these nations together in such a key region of the world.

A2/CNN: Mr. Under Secretary Krach, I thank you for your time and for being here.

U/S Krach: Thank you so much Angelo, it’s an honor again.