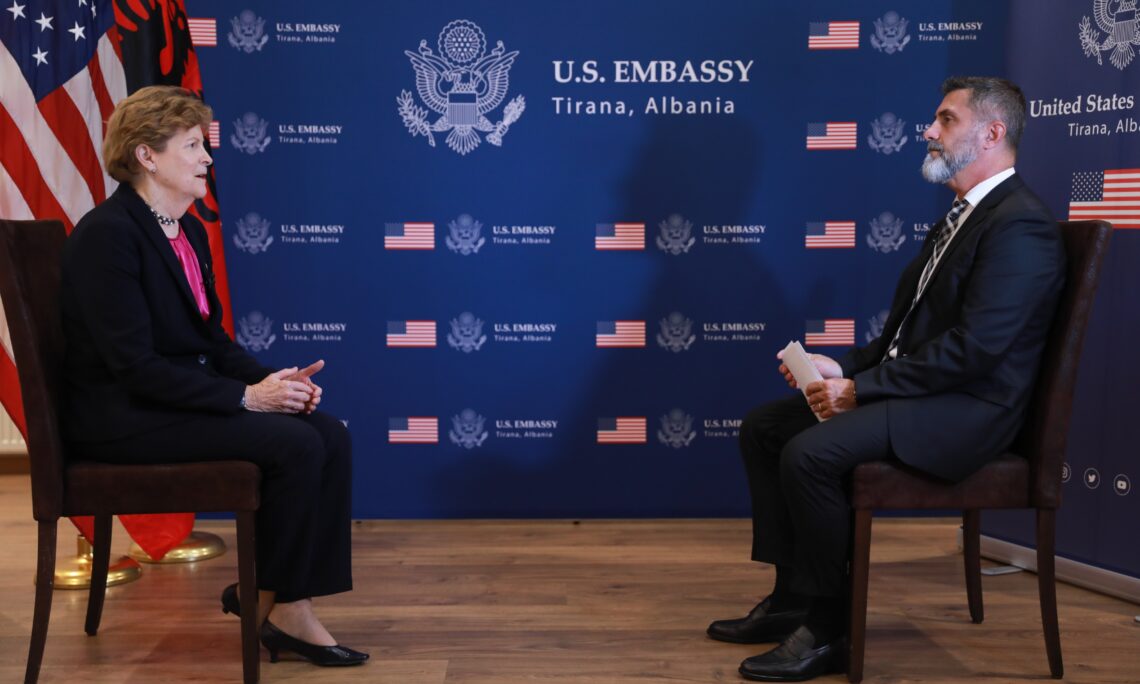 VOA: Senator Shaheen, this is your second visit in the Balkans within six months. What is the purpose?

Senator Shaheen: So, it’s my first trip to Albania and I have to come back to see this beautiful country. I’m really here to make sure that the people in Albania and here in the Western Balkans know that in the United States Senate we are paying attention to what happens here. We are grateful for Albania’s partnership and the work that the United States and Albania have done over the years. This is the 100th anniversary of our relationship. And we very much appreciate Albania’s support for the war in Ukraine. And the help that it’s given the United States to resettle Afghan refugees. So, I’m really here just to help remind everybody how important this partnership is and see how we can be helpful in the United States.

VOA: In August, you and Republican Senator Roger Wicker submitted a bill for the promotion of democracy in the Western Balkans to counter Russia’s destabilizing activities in this region. In a recent report, the U.S. intelligence community mentioned some political parties in the Western Balkans, in Albania, Bosnia, and Montenegro as having received money from Russia. Do you have any more info that you can share with us about it and how concerned are you?

Senator Shaheen: I don’t have specific information about how much money they’ve received. I’m very concerned about it. As we look at Putin’s unprovoked aggression in Ukraine, we know that one of the areas that he’s been interested in has been the Western Balkans, the disinformation campaigns, we just saw a report that showed how much money as you say, that has been spent to try and destabilize elections in Europe and in the United States. We’re seeing that as well – to lie to people about what’s really going on – and if people don’t have correct information, then they can’t make good choices. And so, we want to, we want to do everything we can and the point of that legislation is to try and promote democracy in the Western Balkans to see how we can address Russian disinformation, to see how we can support the reform efforts that are going on here in Albania and across the region.

VOA: One of the bill’s objectives is the fight against corruption and to codify the US executive order on the sanctions against individuals who threaten peace and stability and are engaged in corrupt behavior. In Albania, we have the case of former Prime Minister President Sali Berisha who after the sanctions became more active in politics, and actually, he is leading the main opposition party in this regard, how, how effective are the sanctions?

Senator Shaheen: Sanctions are just one tool that we have in foreign policy to try and influence outcomes and to try and move progress toward democracy. And we also have to look at economic support that can be given. We have to look at our diplomatic tools that are out there. We have a very active ambassador here and an Embassy that has been very engaged with the Albanian government. And we have to help the voters understand what the choices are. You know, in the United States, we’ve had some politicians who have been convicted of crimes who had been elected by the voters. But usually, the voters figure out by the next election, that the politician is corrupt and they’re not acting in the interest of the voters. But unless people have the information, unless they know what the choices are and that’s why the opposition is very important in explaining what those choices are, so that voters know when they go to the polls.

VOA: What is the status of your bill now?

Senator Shaheen: Well, it has bipartisan support, so we’re quite optimistic. We expect a hearing sometime in the month of November after our midterm elections, and we hope it’s going to get through before the end of the year.

VOA: A question regarding Serbia. It is the only country in Balkans that has not joined sanctions against Russia. Last week, the Serbian Foreign Minister signed an agreement with Lavrov in New York on foreign policy. The United States has said that Serbia has to make up its mind as this cannot sit in two chairs at the same time. What is your opinion on Serbia’s behavior?

Senator Shaheen: Well, I think it’s unfortunate and I think it’s against the long-term interests of the people of Serbia. The fact is the aspirations of the people of Serbia are to continue to look West, to look towards joining Europe. They have made their application to the EU and they’re working toward that. And they should feel very concerned about Vladimir Putin’s actions in Ukraine. It’s an unprovoked war of aggression. Every night on the news in the United States and all over the world, we see the horrible effects of that war on the people of Ukraine, mass graves that have been uncovered, torture chambers. We see the destruction of the cities in the country and the effort to wipe out the culture of Ukraine. Now, if Serbia is not careful, they can be next. That’s one of the concerns about Russia’s intentions in the Western Balkans. We know that Vladimir Putin is not talking about stopping if he’s successful in Ukraine. He’s talking about recreating a Russian Empire. That could be very much what the Soviet Empire was. So, I think it’s important for Serbia, for all of Europe, to take every action that we can point out that Vladimir Putin is an outlier, that he is not acting in the interests of the global international order, and we need to do everything we can to stop him.

VOA: Senator, let’s talk about your visit to Tirana. What were your messages for the Albanian politicians?

Senator Shaheen: Well, as I said, it was to point out the partnership and the alliances that Albania and the United States have had in the areas where we work together; the 100th anniversary of our relationship, the importance of Albania’s support in joining us on the war in Ukraine to support the Ukrainian people; the importance of Albania’s taking in Afghan refugees at a time when the United States withdrew, and we were trying to support those people who needed help, and Albania stepped up and said we’re going to do what’s right and try and help people who need help. So, that has been very important. And obviously we’re going to continue to work on economic issues together, the fact that Albania has just signed two deals to help diversify its energy economy is very important. The hydro deal and then the LNG deal with two American companies. We very much appreciate that and hopefully that’s going to be good for both the United States and Albania.

VOA: As you know, Albania is sheltering close to two or 3000 members of the Iranian opposition MEK and maybe that is the reason why Iran retaliated by attacking its vital infrastructure. Albania responded by cutting ties with Iran, but Albania alone is not able to withstand similar attacks in the future, especially when we’re dealing with a rogue state like Iran. Are you concerned about it and is Albania getting the necessary help from the U.S.?

Senator Shaheen: I am concerned. Again, I think Albania stepped up to take in the MEK Iranians at a time when people were being killed before when they were in Iraq. And Albania, said we’re going to help people and that’s an important model to show to the rest of the world. And when they get attacked as the result of that, it’s important for us to step up and help them and we brought in teams, the FBI, and other officials to come in and help respond to that cyberattack. But we do need to do more. We need to help Albania make sure that it has a secure cyber structure for the future, so that it is not subject to attacks either by Iran, by Russia, or by any other country.

VOA: One more question. After the latest cyberattacks, it seems that the parties are not happy with the Iranian opposition, using Albania to engage in political activities. Albanian Prime Minister said recently that the authorities are talking to the Iranian opposition to clearly define the conditions for the members of this group being hosted in Albania to guarantee their life and well-being and not for them to engage in political activities. What do you think of it?

Senator Shaheen: Albania is going to have to make that determination for itself. But, I think it’s important to point out when Albania expelled Iranian diplomats, the United States also sanctioned Iranians and we have been working to try and address Iran’s illegal terrorist activities throughout the Middle East and throughout Europe. And we will continue to do that.

VOA: Senator, thank you very much for this interview.