Home Home | News & Events | Transcript of Interview of U.S. Assistant Secretary of State for Europe and Eurasia Karen Donfried with Voice of America 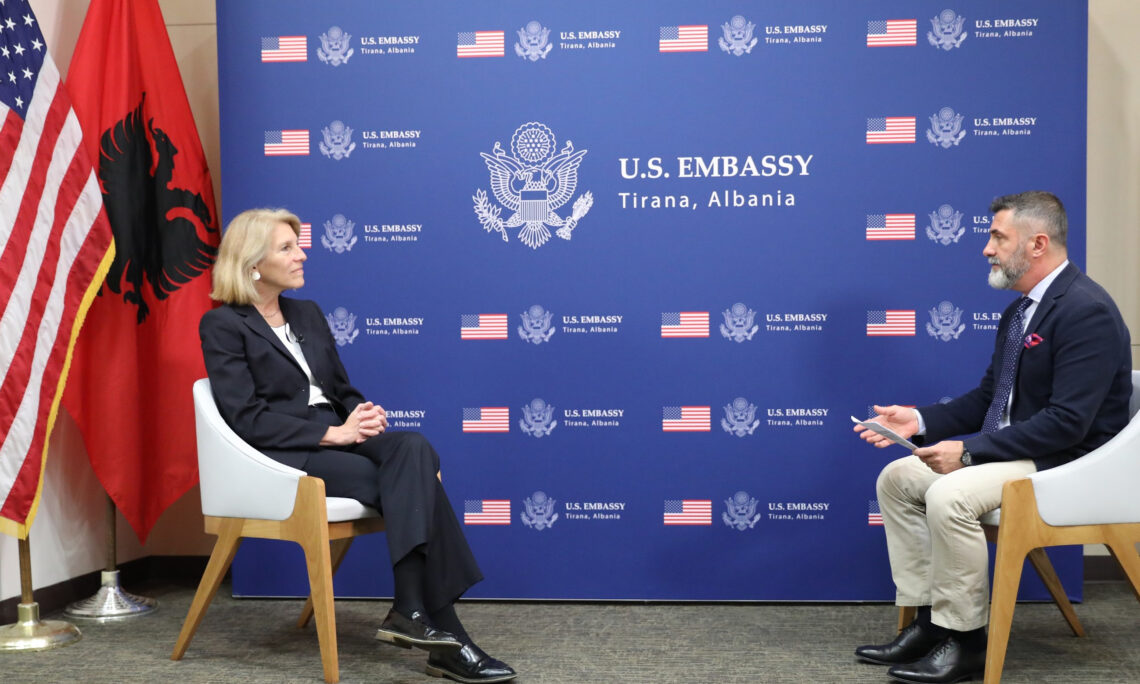 Voice of America: First of all, I would like to thank you for this opportunity. Ms. Donfried, in the press release announcing your tour in the region, it was explained that in Albania, among other things, you would emphasize the need to fully implement justice reform and combat corruption. What specifically did you ask from the Albanian side?

Assistant Secretary Donfried: Well, first, thank you for giving the opportunity to speak with you. It is wonderful to be here in Tirana on a beautiful sunny day and it happens to be the year that we are celebrating the 100th anniversary of U.S.-Albania relations. So, it is a particular pleasure to be here now. We have worked closely with Albania for decades now and I am thrilled to see how Albania is moving into ever deeper Euro-Atlantic integration. We celebrate having Albania as a NATO ally, and we are extremely supportive of Albania’s moving towards becoming a member of the European Union. As part of that process, Albania has been undertaking a series of democratic reforms. Some of those, as you know, have been targeting corruption, and have been focusing on judicial reform. In my conversations here, I have been both applauding the progress Albania has made, but also saying, keep going, there’s more to do and the U.S. is with Albania in supporting greater progress on those reforms.

Voice of America: Ms. Donfried, recently the State Department published the report on Human Rights in the world. According to the report, the main problems are independence of the judiciary, impunity, and pervasive corruption in all branches of the government. According to the report, Albania has made no progress in the recent years, as the same problems keep repeating themselves. What do you make of it? What does it tell you about the state of Albania’s democracy? Freedom House called the Albania system a hybrid in transition only a week ago.

Assistant Secretary Donfried: So, I think what’s important about these reports is they both in some cases capture progress that has been made, but also then highlight what still needs to be done. And in the case of these reforms in Albania I would argue that you are now starting to see the impact of legislation that was passed here in Albania, that is now being implemented. And so yes, as I said in answering the last question, I still think there’s still more Albania needs to do, and we are fully supportive of that. But I think now you are beginning to see the important impact of the legislation that Albania has in place.

Voice of America: Last year, Secretary Blinken designated former PM Berisha for corruption. But the designations, and the push from Washington to keep Berisha out of the parliamentary group, strengthened his position in the Party and today he seems almost in control of the Democratic Party, and is competing to get elected as its chairman. Are you concerned? What impact would this have for the US Albania Relations?

Assistant Secretary Donfried: Secretary Blinken designated Mr. Berisha because of acts of corruption that he participated in, and for me, as a U.S. government official, I cannot meet with designated individuals. I believe the U.S. position on this is very clear. I did today meet with the leaders of the opposition, and I will share with you that I was really struck by the extent on which our conversation focused not on the past but on the future and what it is that the DP seeks to achieve and looks forward to in terms of advancing Albania’s objectives.

Assistant Secretary Donfried: I met with them in my capacity as Assistant Secretary of State for European and Eurasian Affairs, and theirs, as leaders of the Democratic Party. And it is very common when I travel, that I meet with both members of the government and members of the opposition. And I always find it very inspiring, thought-provoking and helpful to hear perspectives from different vantage points in government.

Voice of America: Recently we have seen a lot of criticism and push back against the US Ambassador, especially from a large segment of the opposition, accusing her of interference in the Albanian politics. What’s your reaction?

Assistant Secretary Donfried: I can assure you that the President of the United States Joe Biden, the Secretary of the United States Tony Blinken and I all have full confidence in Ambassador Yuri Kim. And I am delighted that we have people of her caliber and integrity in the U.S. government. And I think this country, Albania, could not be luckier than to have her representing my country and working every day to strengthen what is already an important relationship between the United States and Albania.

Voice of America: Besides Berisha, Washington sanctioned recently a former member of parliament, Aqif Rakipi, with clear connections to the ruling majority party.  What are your expectations from the Albanian authorities?

Assistant Secretary Donfried: I think I have been clear on the role the designations play, why they are important. In terms of how that plays out in Albania, I would say that I believe that Albanian citizens, like people around the world, want to support clean candidates.

Voice of America: The democratic world is challenged today by Russia’s invasion of Ukraine. What do you think the consequences are for the Balkans, given the Russian influence in some countries of our region?

Assistant Secretary Donfried: First, let me say, how heartbreaking it is to see Ukrainians being killed veryday. Russia on February 24 undertook an unprovoked and unjustified, full-scale invasion of Ukraine. And what we’ve seen in the last two months is the brutality of that invasion. Whether it is a nonstop bombardment of Mariupol, whether it is the crimes we’ve seen committed in Bucha, there are so many horrifying instances that I could point to. So, every day is a tragic day for Ukraine. And the United States has taken a very strong position in that conflict and our position is stronger for the fact that allies like Albania are standing tall with us. And if I think about the three prongs of our strategy, Albania is key to each one, whether it is assisting Ukraine, whether it is imposing costs on Russia, whether it is standing up in NATO and making sure that our Eastern and Southeastern flank is appropriately defended, whether it is in the U.N. Security Council, where Albania is a co-penholder with us on Ukraine. I could keep going but this is a struggle not only about Ukraine, it is very important about Ukraine’s sovereignty and territorial integrity. It is also about the European security landscape. And it is fundamentally about the principles we believe in, that each state has the right to make its own sovereign decisions about its formal security policy, many of the underlined principles of European security that in fact Russia has agreed to in OSCE and other venues. So, I cannot overstate the consequence of this moment. And again, President Biden, Secretary Blinken believe deeply that we are stronger in facing this moment because of allies like Albania.

Voice of America: Are you concerned about Serbia’s stance not joining the EU sanctions against Russia?

Assistant Secretary Donfried:  Let me start by saying that Serbia stood on the right side of history. Starting in early March in the first vote in the U.N. General Assembly, when 141 countries, including Serbia, voted to condemn Russia’s invasion of Ukraine and demanded that Russia withdraw. There were five countries in the UN that voted against that resolution. There was a second UNGA resolution, a humanitarian resolution, Serbia also voted with Albania and with the U.S. And then we have the vote to suspend Russia from the UN Human Rights Council, and again, Serbia is with us. I think it is important to acknowledge that, recognize that those were difficult decisions and appreciate the decisions that Serbia made. When it comes to sanctions, as I mentioned, the U.S. believes it is important to impose sanctions on Vladimir Putin, for the actions that he is undertaking, unjustified, unprovoked and brutal actions. And in that we do call on Serbia to align itself, in this case with the EU and the sanctions it has imposed. And I would say here that what the U.S. and the EU are doing on the sanctions front, the coordination that it is there, is in many ways a high watermark of our work together. And I want to point out here too that the response package includes sanctions and export controls, and I think those export controls are important too. And I want to highlight that this coalition standing up in opposition to Russia’s brutal actions includes not only our European allies and partners, but also our allies and partners in Asia. And I do think the fact that so much of the world is opposing this is powerful.

Voice of America: One more question. Do you think Serbia’s arms purchases from Russia and most recently from China present e risk for security and stability in the Balkans?

Assistant Secretary Donfried: I will say that there was a difference of opinion among some Europeans and the United States on what Russia’s plans were in the run up to February 24. And I think because some of our European allies and partners did not believe Russia would undertake the assault that it did, in many ways I think that February 24 has been for much of Europe the equivalent of 9/11 for the United States. And it has shown all of us a side of Russia that we hoped wasn’t there. And when any country makes decisions about weapons’ purchases, of course when it is thinking holistically about the relationship with that country, and it is very hard to imagine any country having an unchanged relationship with Russia in the wake of February 24. And I would refer back to the decisions that Serbia made in the UN. China, I do believe, has made a strategic decision to ally with Russia. And again I think any decisions a country makes about arms’ purchases are informed by that holistic view of what is that relationship with a Russia or with a China going forward. And I think I would leave a comment there.

Voice of America: Ms. Donfired, thank you very much!

Assistant Secretary Donfried: Very much my pleasure. And very nice to meet you. And thank you for your great work at Voice of America.