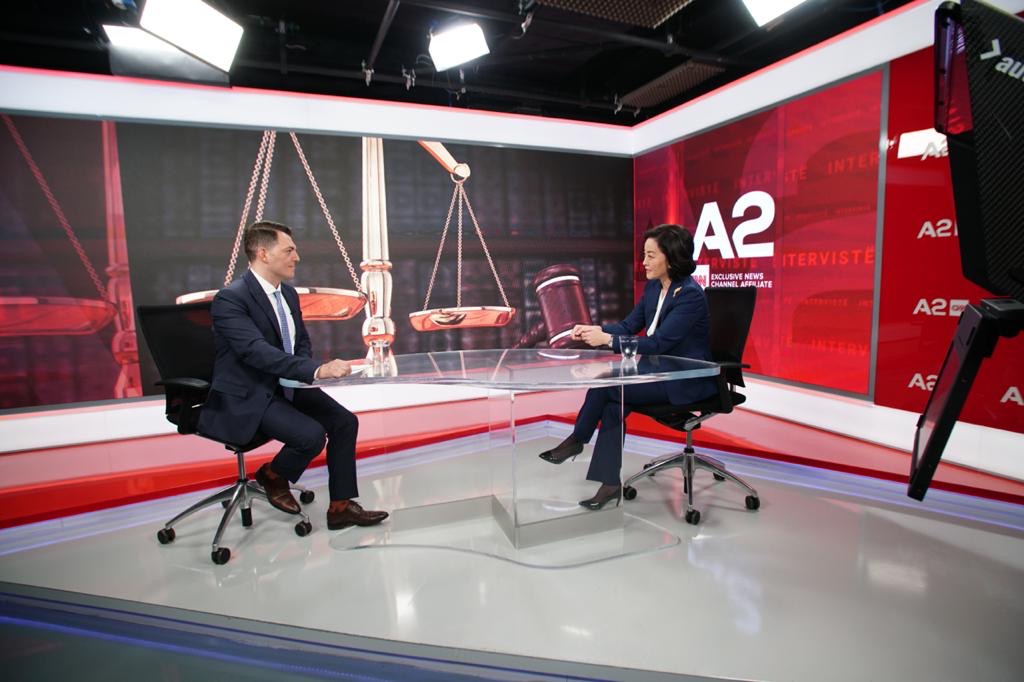 A2/CNN: Dear viewers, welcome. This is our interview with U.S. Ambassador to Albania, Ms. Yuri Kim. Madam Ambassador, it’s an honor to have you in the studio and let me welcome you to A2.

Ambassador Kim: Thank you very much. It’s a pleasure to be here.

A2/CNN: It’s a pleasure for me as well. Let’s start talking about justice reform in Albania, a big investment for the U.S., not only money-wise and people-wise. A great deal of trust has been put on it, are you happy with the results thus far?

Ambassador Kim: I think that the way we do that is that the Albanian people have to keep speaking up to express their dissatisfaction, to express their demand for greater transparency, greater rule of law. As far as the United States is concerned, I have clear instructions from Washington that this remains a priority and I intend to carry that out.

A2/CNN: I want to ask you about a tweet that you tweeted not too long ago. You spoke of rumors of a threat to kill justice reform. Did those rumors turn out to be true and are you prepared to defend justice reform from anybody trying to kill it?

A2/CNN: Okay, this leads me to another question. Many of the people you work with are viewed in the public as dubious. Their reputation is not always the greatest. How do you deal with that?

Ambassador Kim: As diplomats, we deal with a wide range of people and I want to emphasize again, I’m a diplomat. I’m not a priest. I’m not a police officer. I’m just a diplomat and my job here is to strengthen the relationship between the Albanian people and the American people, irrespective of who may be seating in the seats of power in Washington or in Tirana. My job is to build relations with the two countries and I’m very pleased to be able to do that.

A2/CNN: But this is, you must admit, a special country in the world…

A2/CNN: The relationship, the amount of love and trust and respect, and the expectation as well is high. Does that make your job easier or harder?

Ambassador Kim: I think it makes it both. That’s a very good question. It’s easier in the sense that we start out with such a huge balance in our favor. I’m honored to be in Albania, where the people really believe in the relationship and really believe in the United States of America, so I couldn’t ask for more. But, as you say, it also means that there are high expectations and so there’s a long way to fall if we don’t meet those expectations.

A2/CNN: Yeah. Talking about electoral reform, I counted about 18 hours at your residence, over two days, with these guys to discuss this. There was more hope among the citizens for deeper change, more systemic change with electoral reform. Are you satisfied with what was achieved?

Ambassador Kim: The goal for us, for the United States, in supporting electoral reform was very clear. There is an immediate goal, which is to support Albania in meeting the requirements for EU membership. So, it’s a very specific goal…

Ambassador Kim: …it is technical, right, but it’s absolutely necessary. And there was an urgency to it, right? Because the world in Albania before March 25 is different from the world after March 25. This is real now and there are real requirements with real deadlines. And, when some of us saw that perhaps the negotiators could use a little bit of extra support, we stepped in to provide that and I think they produced. I know from reading social media and from talking to people that there is a desire for greater change and I think that that is something that’s not for me to decide. It’s for the Albanian people to decide and it’s for parliament to decide.

A2/CNN: But you agree that more change is needed in that respect?

Ambassador Kim: I don’t think that it’s for me to say whether more change is needed or not. My job is to help Albania get into the EU and, as far as that is concerned, the agreement coming out of June 5 meets that goal so that’s what I’m focused on. If there was a desire for more, I think as I said in my tweet about my meeting with Rudina Hajdari, I respect that. It doesn’t mean I’m at the front of the line, it doesn’t mean I’m all the way in the back, but it means genuinely that I respect the desire of the Albanian people for more.

A2/CNN: She was sitting in this studio on Monday, I’m sorry on Tuesday, when she said that she would not vote for this agreement for more to be achieved, for more to be added, like open lists, the Danish model was mentioned. This opening of the lists, it’s important. So, that doesn’t disappoint you, this claim that she might not vote for it?

Ambassador Kim: I think Rudina and a number of people have a very difficult job. Those who stayed in parliament did the right thing. They ensured that democracy continued to function in Albania. I think it’s wonderful that they are ambitious for the Albanian people, they want more and more. At some point, they will have to make some strategic decisions about what is important now and what can be achieved later. That’s all I have to say on that.

A2/CNN: On the other hand, Mr. Rama said that this would be the last agreement, in an embassy, that he is part of. Would you comment on that?

Ambassador Kim: I know exactly what he’s saying. I think that he’s right. Why should Albanian politicians have to gather in a foreign embassy, even the American embassy…

A2/CNN: …because they have more credibility…

Ambassador Kim: …in order to do that? So, I think that that’s a problem. I think that as a NATO ally and as an aspiring EU member, Albanian leaders have to get into the practice of talking to each other and of compromising, right? Compromise is a dirty word in Albania, I’m discovering, but it’s actually the key to democracy. It’s the magic ingredient that every democracy needs. If what you want is 100% of what you want and you deny the other person any pluses, that’s not democracy, that’s something different. It has to be a give-and-take process and it means that sometimes you have to settle for good enough as opposed, you know, to exactly perfect.

A2/CNN: So, not let the perfect be the enemy of the good…

A2/CNN: Ok, let’s talk about crime and corruption, a big topic here, big hopes in Albania. The U.S. has spoken very candidly about it, the big investment in SPAK, the BKH, all these institutions of justice reform, yet, four years into it, the courts are still not giving justice to corrupt officials. We haven’t seen any of them hit jail yet. What would you comment on that?

Ambassador Kim: I would say, as I said at the beginning, that we’re at a critical stage. It’s made just enough progress…you know institutions have been set up. Almost all of them are up and running, except for the NBI, for which we’re waiting the selection of a first director, and then of course, there’s the Constitutional Court. These institutions have to become functional and the issue of the Constitutional Court has been stuck for a while. Some of it is legal, it’s genuine. Some of it is political. There is really fundamentally issue of political will and either by the time this interview airs, the Venice Commission may have issued its opinion in final form. From all that I’m aware of in that opinion, it offers an opportunity not to celebrate who won, who lost, but to look at it as an opportunity to move forward. Because what I see right now is that some would prefer that justice reform go round and round and round in a circle, a dog chasing its own tail. And what we need is for justice reform to move forward and, as I said before, this is something that is not going to be perfect right off the bat. It’s not going to be easy, it’s not going to be quick, but you know what it is, it is important, it is important for Albania’s future. And so people have to remain vigilant, they have to keep demanding change and I hope they don’t give up because we’ve come so far, it would be tragic to give up at this point.

Ambassador Kim: I don’t give up easily, I will tell you that.

A2/CNN: That’s great because that’s what we need. I’ll just stop here for one second. Justice reform was supposed to take justice away from political influence, but we’ve seen this battle, everybody trying to name these judges. Does it concern you a little bit?

Ambassador Kim: Yes, it does, but something as major as justice reform is not a switch. It’s a spectrum. It requires persistence and making that point in the spectrum move from one end to the other. It’s going to be a long, painful, slow process and anybody who tells you different is not telling you the truth. If the expectation is that we will go to Albania from no rule of law to rule of law, no justice to justice, corrupt to not corrupt, this is not possible. It’s going to be a process.

Ambassador Kim: So when you see mistakes that are made, I don’t think that it’s a reason to give up. When you see that there are problems with vetting, for example, that’s not a reason to give up. It’s a reason to be more vigilant but what I worry about is, rather than focusing on the big picture, which is ridding Albania of corruption in the long run, and firmly establishing the rule of law, that instead we are being made to get distracted by various problems. And you say, this person, this judge is not perfect and therefore the entire vetting process should…

Ambassador Kim: …should be collapsed.

Ambassador Kim: You know this expression from your time in the United States: the circular firing squad. I think those who don’t want justice reform are trying to set everybody up in a circular firing squad so that they shoot each other instead of focusing on the real target.

A2/CNN: Good. I want to talk about citizens and society at the end because, as you mentioned, they are an non-disposable part of this puzzle for Albania. How have you seen civil society in Albania and youth especially?

Ambassador Kim: I think that young people in Albania are amazing and every time I have a chance to talk to people, I come away feeling inspired. You know what else I notice? I notice that people in Albania don’t recognize how much power they have.

Ambassador Kim: And, that is what it means to be in a democracy. Your power is not just that moment when you go and vote. Your power is your demand for transparency, your demand for accountability in between those votes. So my hope is that the people of Albania recognize how powerful they are and use it to make the changes that they would like.

A2/CNN: It’s nice to have good friends like you, so, madam ambassador let me thank you.