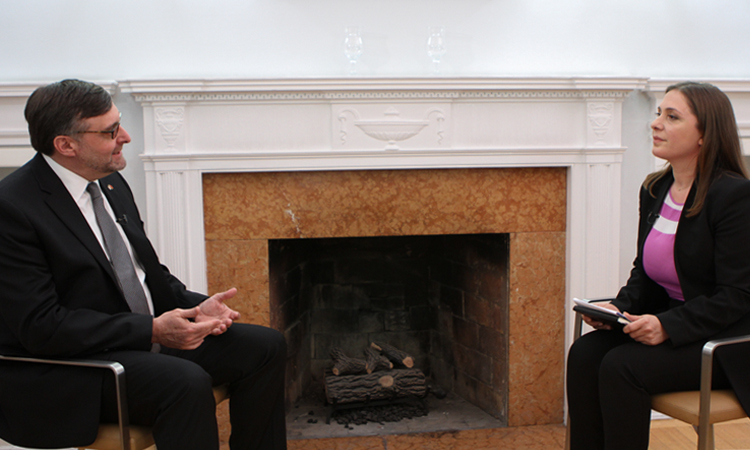 Anila Hoxha: Mr. Palmer, what does justice reform represent for the U.S. Government in Albania and what assistance does it plan for the next steps of justice reform?

DAS Palmer: Thank you for having me here and thank you for that question. Justice reform for the United States represents a path forward for the Albanian people to a better future, to a European future, to a future of peace and prosperity and a relationship of accountability between the people and their government. It is the heart and soul of all of the reform efforts here. It is something that the United States has invested a great deal of effort and energy in, something that we see as central to Albania’s aspirations and Albania’s future.

Anila Hoxha: Does the U.S. Government think that the tense political situation has anything to do with justice reform?

DAS Palmer: Rather than trying to engage in political analysis, I think what I would underscore is the interest all of the stakeholders have in pursuing reforms, in pursuing accountability, in pursuing transparency, irrespective of whichever party is in power at any given time, they’re going to want to lead a country that is strong, a country that is stable, a country that is prosperous, a country in which the relationship between the people, the citizenry and their government is one that has the support of the Albanian public, one that is a contributor to a positive future for the country.

Anila Hoxha: The U.S. Embassy has been very clear in its statements that ‘justice reform will not be stopped.’  Is there concern about political use of justice reform?

DAS Palmer: I think there’s always concern that people who are engaged in corrupt practices, people who are benefiting from a system that is flawed, will work against reform efforts, will work to maintain, to preserve a system that by definition they benefit from. But I think, over time, what you will see is progress on the reform front, progress in the pursuit of judicial vetting, progress on electoral reform, progress in the fight against public corruption and organized crime, and as people see progress, they will increasingly invest in that process toward the goals of clean, transparent and accountable government and will hold their elected leaders to account.

DAS Palmer: I think there are a couple of things that we can do. We’ve contributed a lot over the course of the last 20 years to investing and training and professionalism of officials in the judicial sector in Albania. We will continue to do that. We will continue to work to build capacity, to strengthen the capabilities that individuals bring to the institutions, and to strengthen the integrity of the institutions themselves. We will also work to hold officials, particularly elected officials, senior government representatives accountable; accountable to their own people and accountable to the process of European integration. Albania aspires to membership in the EU. That’s a long and difficult process that will require fundamental reforms; some of them will be difficult; some of them will be politically painful. But we will work to highlight for the Albanian public what it is that’s expected and work with the elected leaders to ensure that they deliver on those commitments.

Anila Hoxha: There are allegations and accusations of double standards in the vetting process, the most important of the entire justice reform.  Do you agree?

DAS Palmer: I think what’s important in the vetting process – and I agree with you that vetting is central to this process – that you need people in positions of authority and responsibility who are clean and who are accountable and who behave in a transparent fashion. We’re committed to working to strengthen these institutions and working to ensure that nobody is above the law and that no one is above accountability and it doesn’t matter what resources they bring to bear, how much money they have, that the law is applied equally, that the law is applied equitably and all are held to account.

Anila Hoxha:  Many judges and prosecutors have been denied U.S. visas.  Does the U.S. Government plan to deny visas to opposition MPs who abandoned their mandates?

Anila Hoxha: In your opinion, who’s next?

DAS Palmer: [laughs], I’m not going to make predictions about the future but I will say that all public officials who are engaged in corrupt practices, all who are engaged in violating the trust that is being placed in them by the Albanian public, all of them should be afraid.