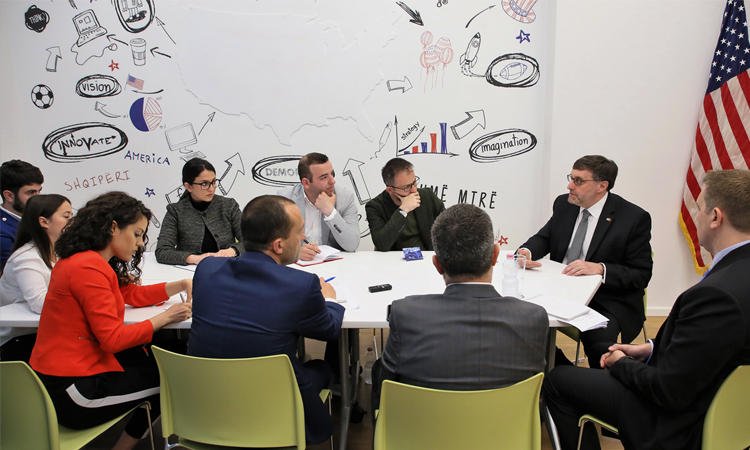 Thimi Samarxhiu, Vizion +: Senior U.S. officials have stated in many cases that Russia’s influence in the Western Balkans has brought instability in this region.  Do you see the latest events in the region, especially Albania, affected by this influence?

DAS Palmer: I think it is important to put this in a broader regional context, what it is that the United States wants to see in the Western Balkans and what it is that Russia would like to see.  The United States wants to see a region that is based on transparency, the rule of law, cooperation amongst nations on a European perspective. The Russians prefer a region that is organized on a basis of distrust, disorder, friction, chaos, and that is an environment that Moscow believes it can capitalize on from a strategic perspective. So the goals of the United States and the goals of the Kremlin are fundamentally at odds. The good news here is that our vision for the region is consistent with the vision that the countries of the region have embraced and adopted for themselves. We want a future for the countries of the Western Balkans that is the same as the countries of the region desire and inspire to for their own people. The Russian ambitions are more self-interested and are focused on creating an environment that Moscow feels it can capitalize on, I think that is true in Albania as it is elsewhere in the Western Balkans, even if Albania is a harder target for the Russians that places that are maybe a little more open to this kind of malign influence.

Antonio Çakshiri, Report TV: Recent documents published by the Foreign Registration Act in the DoJ, discovered that a lobbying company lobbied for the DP for Miss Kavalec. How much was this lobbying affected the disapproval of Miss Kavalec and will we have a new name for the new Ambassador in Albania?

DAS Palmer: First let me note that the Senate did not disapprove Kathy Kavalec as the nominee for Ambassador to Albania, they took no action on it. So Miss Kavalec is not re-nominated, but her nomination was in no way acted upon, disapproved; there was no negative determination. In terms of the role of lobbyists, this is a normal part of the democratic, political process. Lobbyists do a lot of things in the Washington system all the time, and they by and large, on balance, make a positive contribution to the policy process and to the debate. In terms of the specifics of what you’re getting at, of the specific charges, there are ongoing investigations, it would inappropriate for me to comment on the specifics of that. But the fact of lobbying is not itself something that is in any way suspicious, or malevolent, or negative lobbying because lobbying goes on all the time on a wide range of issues.

Antonio Çakshiri, Report TV: And the name of the new Ambassador? Are we going to have it soon?

DAS Palmer: I certainly hope that we will soon be a position to act on that as quickly as possible.

Aurora Golemi, News 24: The U.S. has already expressed its approval for the agreement between Kosovo and Serbia. The perception of the Albanians in Albania and Kosovo is that the U.S. between Kosovo and Serbia, which envisions modification of borders or an exchange of territories. While Germany opposed such change while Kosovo is now torn between the U.S., which is a partner and Germany. President Thaci has the support of the Americans, while PM Haradinaj is support by Germany and imposed sanctions on all Serb goods. What is your opinion regarding this perception of the Albanian public?

DAS Palmer: The truth of the matter is that both the U.S. and Germany support Kosovo. The U.S. is not advocating a particular outcome of the negotiating process, what we do advocate for is an agreement between Belgrade and Pristina that secures the full normalization of the relationship between Serbia and Kosovo. We believe that the centerpiece of that should be mutual recognition. That is, Serbia recognizing Kosovo as a sovereign and independent nation and Kosovo recognizing Serbia in the same way. And on the basis of that, these two independent countries working out their differences. Any agreement on normalization of the relationship is multi-dimensional, there will be a political component to it, there’s a security component, there’s an economic and trade component, there’s a cultural component that takes into account the status of the Orthodox Church properties in Kosovo. The issue of borders may also be a component of this. It is not the centerpiece of the agreement by any stretch of the imagination. What is important to the U.S. is that any agreement be locally owned, that it be something that both sides feel they can support, both sides feel they can sell, both sides believe protects their core interests, and what we have done is encourage the parties to sit down at the table and negotiate the best deal that they can. To the extent that the U.S. is ready to support that deal, we want them to bring it to us, show it to us, let us see what it is. If we have concerns about it, we will articulate those concerns and see if we can work our way through it, but we are not advocating any particular outcome or any particular component piece of what would [by definition] be a comprehensive discussion, a comprehensive deal. We support this process, we support the EEAS and the EU in leading this process. We are not parties to the negotiation but we are stakeholders in the sense that we have an interest in its positive outcome. We want a solution that opens up a European path, a European future for both Serbia and Kosovo, and we’re committed to partnering with the authorities in Kosovo as well as with the government in Serbia to advance that goal.

Mr. Joel Çela, TV Klan: Two years ago, it took the intervention of A/S Hoyt Yee to find a political solution between the majority and the opposition for the opposition to enter the general elections. Mr. Yee asked the parties to work on a platform proposed by the EU.  Two years later, we have almost the same situation, even more aggravated even, with the opposition being out of parliament, having burned its electoral mandates and stating it will not go to the June 30 elections with this government.  Do you have a platform that you’ll propose to the sides and what is your main advice to them for finding a solution?

DAS Palmer: I am not here to negotiate a resolution. I am not here to advocate for a particular outcome. I would encourage all the political parties to participate in local elections. I think your participation in the democratic process is fundamental, it is something that political parties owe to their supporters. It’s something that they owe to their voters, to get into the political arena, to compete hard, to win an election and then to use victory as the vehicle for delivering on their commitments and their vision for the future. So I think that instruments like boycotting elections or burning of mandates are fundamentally at odds with democratic practices. So I would encourage opposition parties to look for ways that they can reengage in the political process. I think the local elections in June are the best opportunity for them to do this early. To the extent that there’s an opportunity for dialogue with the government about electoral reforms, I think they should pursue that opportunity. Electoral reforms are important in Albania, not as a vehicle for overcoming the current “crisis” or the current impasse, but because they are important for Albanian democracy. The OSCE has laid out a number of clear goals and objectives for that reform process. It is going to be important for Albania’s EU aspirations that appropriate electoral reform are put in place. So there’s certainly room for that discussion but looking ahead to June I would absolutely encourage all of the opposition parties to get into the political arena and to compete and to win elections.

Nertila Dosti, Ora News: Mr. Palmer, What is the U.S. position on the political crisis in Albania and the responsibility of the sides and should the majority accept the opposition demands for a transitory government and early elections?

DAS Palmer: Our official stance is that Albania has a duly elected government, it is a partner for the U.S., it is one that we work well and closely with. In terms of how we see Albanian politics playing out, that is really for the political class to negotiate amongst themselves. I think it would be unfortunate for the opposition not to look for ways to reengage in the democratic process including, most immediately, in June. How it is that this process is resolved, the dispute is resolved, is really up to the political parties and the leaders of the political parties to work out. Albania has continuous support and friendship of the U.S. moving forward. The institutions of government in Albania are functioning, they’re legitimate. Albania has no trouble making decisions, passing laws. I am quite confident that this government will be able to continue to move the country forward toward a European future, will be in a position to continue to take actions in combating organized crime and fighting corruption, in pursuing judicial reforms, in conducting the vetting that is necessary so that the Albanian people can have confidence in the administration of justice. We will continue to partner with the relevant authorities, the elected representatives, the government officials in Albania in pursuit of those goals and objectives.

Marsela Karapanço, A2/CNN Affiliate: Mr. Palmer, the State Department’s annual report wrote that in Albania there’s concerns about corruption, drugs and vote buying. These are the problems that the opposition has shown as its cause. So what the majority has to do to convince the opposition to be part of the elections in June?

Muhamed Veliu, Top Channel: Mr. Palmer, in 2017, an offshore company paid $150,000 to a lobbying firm in Washington. And the beneficiary of this lobbying was the DP of Albania, so as I mentioned it was offshore. How concerned is this development for the State Department?

DAS Palmer: As I said before, lobbying is a legitimate activity, but there are rules that are associated with it. And so what’s important to us as a government, what is important to the State Department in representing American interest is that the rules are observed. There are rules of transparency, declaratory rules if you are going to represent a particular interest; you have to be upfront about that. So what’s important, again, is not that there are acts of lobbying, that is a normal part of the democratic process, particularly in the way the American system functions and operates, but what is very important is that it be transparent and it be accountable and that those who are engaged in it are upfront and clear about the interest that they represent.