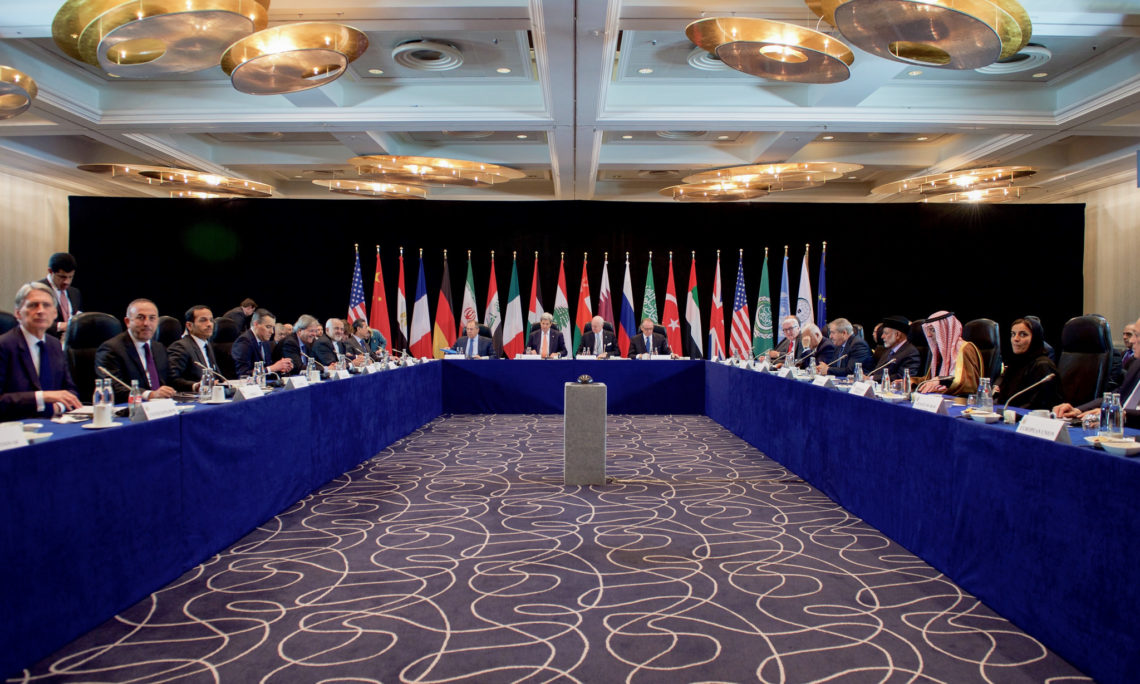 Meeting in Munich on February 11 & 12, 2016, as the International Syria Support Group (ISSG), the Arab League, China, Egypt, the EU, France, Germany, Iran, Iraq, Italy, Jordan, Lebanon, the Organization of Islamic Cooperation, Oman, Qatar, Russia, Saudi Arabia, Turkey, United Arab Emirates, the United Kingdom, the United Nations, and the United States decided that humanitarian access will commence this week to besieged areas, and an ISSG task force will within one week elaborate modalities for a nationwide cessation of hostilities.

The ISSG members unanimously committed to immediately facilitate the full implementation of the UN Security Council Resolution 2254, adopted unanimously December 18, 2015. The ISSG reaffirmed their readiness to carry out all commitments set forth in the resolution, including to: ensure a Syrian-led and Syrian-owned political transition based on the Geneva Communiqué in its entirety; press for the end of any indiscriminate use of weapons; support and accelerate the agreement and implementation of a nationwide ceasefire; facilitate immediate humanitarian access to besieged and hard-to-reach areas and the release of any arbitrarily detained persons; and fight terrorism.

In order to accelerate the urgent delivery of humanitarian aid, sustained delivery of assistance shall begin this week by air to Deir Ez Zour and simultaneously to Fouah, Kafrayah, the besieged areas of Rural Damascus, Madaya, Mouadhimiyeh, and Kafr Batna by land, and continue as long as humanitarian needs persist. Humanitarian access to these most urgent areas will be a first step toward full, sustained, and unimpeded access throughout the country.

The members of the ISSG will use their influence with all parties on the ground to work together, in coordination with the United Nations, to ensure that all parties allow immediate and sustained humanitarian access to reach all people in need, throughout Syria, particularly in all besieged and hard-to-reach areas, as called for in UNSCR 2254. To this end, the UN will submit a plan to an ISSG humanitarian task force, which shall convene on February 12 and next week. This group will comprise the ISSG co-chairs, relevant UN entities and members of the ISSG with influence on the parties in a position to ensure humanitarian access.

The ISSG reaffirmed that humanitarian access should not benefit any particular group over any other, but shall be granted by all sides to all people in need, in full compliance with UNSCR 2254 and international humanitarian law. The ISSG asks the UN to report weekly, on behalf of the task force, on progress on the implementation of the plan referenced above, so that in any cases where access lags or approvals are lacking, relevant ISSG members will use their influence to press the requested party/parties to provide that approval. There will be a process for resolving any problems so that relief can flow expeditiously. Any questions about access or delivery will be resolved through the task force.

All ISSG members commit to immediately work together with the Syrian parties to ensure no delay in the granting of approval and completion of all pending UN requests for access in accordance with UNSCR 2254, paragraph 12.

ISSG co-chairs and members will ensure that aid convoys are used solely for humanitarian purposes. International humanitarian organizations, in particular the United Nations, will play the central role, as they engage the Syrian government, the opposition and local populations, in arranging the monitoring and sustained and uninterrupted distribution of aid.

Achieving a Nationwide Cessation of Hostilities

The ISSG members agreed that a nationwide cessation of hostilities must be urgently implemented, and should apply to any party currently engaged in military or paramilitary hostilities against any other parties other than Daesh, Jabhat al-Nusra, or other groups designated as terrorist organizations by the United Nations Security Council. The ISSG members commit to exercise influence for an immediate and significant reduction in violence leading to the nationwide cessation of hostilities.

The ISSG members decided to take immediate steps to secure the full support of all parties to the conflict for a cessation of hostilities, and in furtherance of that have established an ISSG ceasefire task force, under the auspices of the UN, co-chaired by Russia and the United States, and including political and military officials, with the participation of ISSG members with influence on the armed opposition groups or forces fighting in support of the Syrian government. The UN shall serve as the secretariat of the ceasefire task force. The cessation of hostilities will commence in one week, after confirmation by the Syrian government and opposition, following appropriate consultations in Syria. During that week, the ISSG task force will develop modalities for the cessation of hostilities.

The ISSG task force will, among other responsibilities continue to: a) delineate the territory held by Daesh, ANF and other groups designated as terrorist organizations by the United Nations Security Council; b) ensure effective communications among all parties to promote compliance and rapidly de-escalate tensions; c) resolve allegations of non-compliance; and d) refer persistent non-compliant behavior by any of the parties to ISSG Ministers, or those designated by the Ministers, to determine appropriate action, including the exclusion of such parties from the arrangements for the cessation of hostilities and the protection it affords them. Although a cessation of hostilities can facilitate humanitarian access, it cannot be a precondition for such access anywhere in Syria.

The ISSG decided that all members will undertake their best efforts, in good faith, to sustain the cessation of hostilities and delivery of humanitarian assistance, and take measures to stop any activities prohibited by United Nations Security Council Resolutions 2170, 2178, 2199, 2249, 2253, and 2254. The ISSG again expressed concern for the plight of refugees and internally displaced persons and the imperative of building conditions for their safe return in accordance with the norms of international humanitarian law and taking into account the interests of host countries.

The members of the ISSG reaffirmed the imperative of all sides engaging in negotiations under the auspices of the United Nations as soon as possible, in strict compliance with United Nations Security Council 2254. They reaffirmed that it is for the Syrian people to decide the future of Syria. The members of the ISSG pledge to do all they can to facilitate rapid progress in these negotiations, including the reaching of agreement within six months on a political transition plan that establishes credible, inclusive and non-sectarian governance and sets a schedule and process for drafting a new constitution, free and fair elections, pursuant to the new constitution, to be held within 18 months and administered under supervision of the United Nations, to the satisfaction of the governance and to the highest international standards of transparency and accountability, with all Syrians, including members of the diaspora, eligible to participate.

Full implementation of these objectives will require the ISSG co-chairs and members, the UN and others, to work closely on political, humanitarian, and military dimensions.