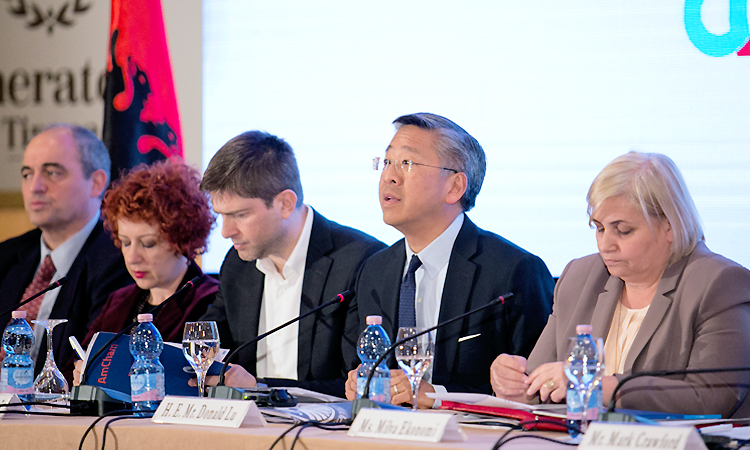 When I arrived two years ago, one of the first events that I participated in was the AmCham General Assembly meeting where we said farewell to Floreta Faber and welcomed Lorenc Gjoni.

Times have changed.  Ministers have come and gone.  Floreta is in Washington and Lorence has thrived here in Tirana as executive director.

Now, as President Trump famously said, “It’s time to move on.”  Lorenc is completing two successful years with AmCham and we are welcoming our good friend Enita Bezhani as the new executive director.

Enita has been working for the biggest investment project in the history of Albania, the Trans Adriatic Pipeline.  We were lucky to attract her to AmCham.

2017 will be a great year for Albania.  This is the year that Albania begins the implementation of judicial reform which will forever transform the business environment for all of you.

2017 will also be the year of parliamentary elections, which will set Albania on a democratic course for four years of greater political stability and progress towards Albania’s European future.

2017 will be a year in which the EU and the United States support Albania’s efforts to confront the enormous societal challenge of organized crime and illegal drugs.  This will make opportunities for honest businessmen even greater.

2017 is the year when Albania finally comes to terms with high-level corruption through the creation of the Special Structure on Anti-Corruption and the National Bureau of Investigation.

2017 is the year when we see large-scale international and domestic investment coming to Albania.

Some people think I’m an optimist.  I disagree.  I am a realist and I see good things coming for the people of Albania.