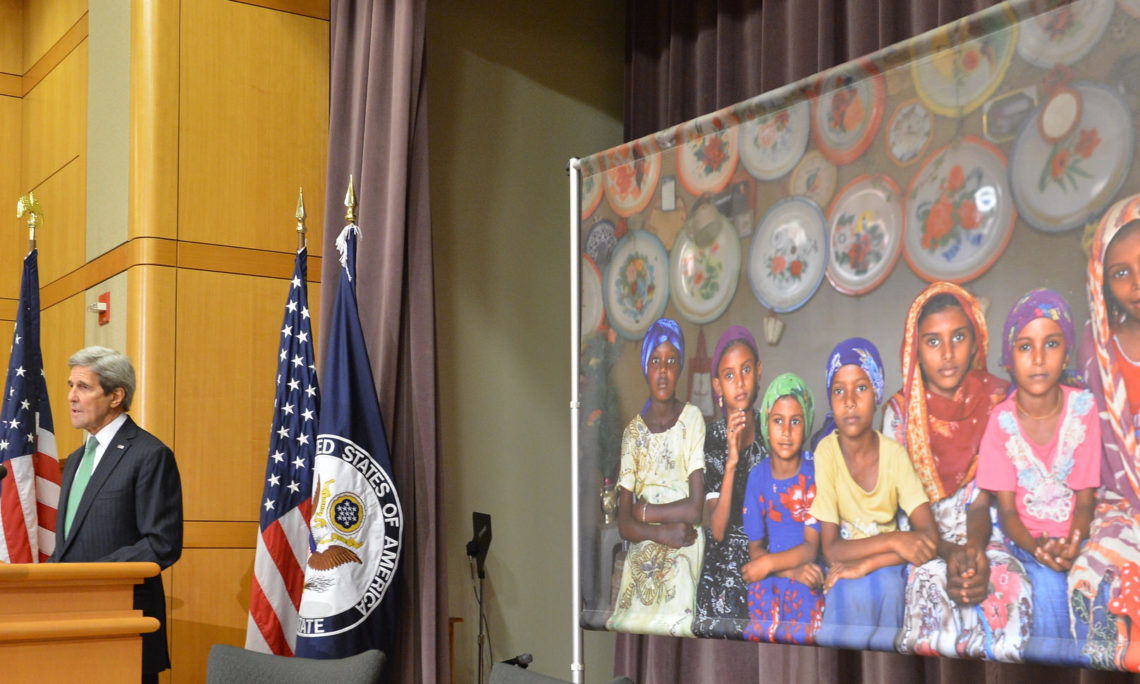 So it’s been particularly important for me to make certain that I prove, in fact, that issues which have been of importance to me all my life, actually – as a prosecutor where I started one of the first rape counseling units, one of the first victim-witness assistance programs, and many other efforts – to these kinds of initiatives, I really wanted to be able to prove that the continuum, that the concern about women, girls throughout the world is not the special terrain of a woman who happens to be Secretary of State, but it is any Secretary of State.  And we are doing that.  I think if you look at this extraordinary photograph and you look at the eyes of each and every one of those women, they tell an extraordinary story.  It’s a very powerful photograph.

And Cathy, I can’t thank you enough for the incredible work that you and your team are doing every single day on behalf of women and girls.  I want to welcome all of our colleagues who are here from USAID, from the Peace Corps – all Peace Corps folks, raise your hands.  Hooray.  Thank you very, very much for what you’re doing.  (Applause.)

Millennium Challenge Corporation, we appreciate also your presence here, as well as representatives of the business community, civil society organizations, and I want to thank the 10 men in the audience who are – (laughter) – concerned enough to be here.  (Applause.)

We are here, all of us, every single one of us, because we believe fundamentally a core value of the Obama Administration – of the American people, I believe – that equitable treatment of women and girls is and always must be a core tenet of America’s global leadership.  We’re here because we recognize that gender bias and discrimination are not simply affronts to the individual dignity of women or a woman, but they are threats, ultimately, to the peace and the security of an entire community or country.

We’re here because international norms explicitly condemn early and forced marriage, genital cutting, sexual violence, the denial of access to education.  Some say that these practices are traditional and cannot be helped.  We say, quite simply, that they are wrong and they must be stopped.

Now, one of the things that I’m proudest of as I’ve traveled around to various countries over the course of the last three-plus years – Afghanistan is an extraordinary story with respect to young women.  When we went there in 2001, there were about 1 million kids in school and almost every single one of them was a boy.  Today, there are 7 million-plus children in school and nearly half – not yet half – but nearly half are women, young girls.  That’s an extraordinary story and it is one that we obviously want to hold on to, we don’t want to see reversed days and months ahead.

We’ve made remarkable progress like that in supporting access to primary education, access to health care for new mothers, financial backing for women entrepreneurs and workers.  Actually, while I was in Afghanistan, I also met with 10 extraordinary women who had each started a remarkable business, and one was breaking a frontier not just in business, but in sports business, which is unheard of in Afghanistan.  And each of them were doing so pushing against all of the traditions and the mores and the sort of conventional wisdom that denied them the right to have equality and to have opportunity – remarkably courageous women, and I was deeply inspired by it.

But we come here this morning recognizing that we’re just not satisfied.  We’re not satisfied with where we are.  We want to build on all of the steps that have been taken thus far in order to intensify our efforts to empower young women at the pivotal stage between childhood and maturity.  And that is why today we are proudly launching the U.S. Global Strategy to Empower Adolescent Girls.

This plan brings together resources and expertise from all of the agencies that are represented here, and more.  And at State, we intend to focus on three particular areas.  First, we’re going to work to promote laws and policies abroad that empower adolescent girls and protect their rights.  One of the most effective ways to meet this goal is to make certain that every single young woman has the ability to go to school, and to receive a quality education in a safe environment.  And this is vital not only to prepare a young woman for the workplace, obviously, but for much more than that.  It is essential to be able to meet all of life’s challenges, and particularly life’s challenges in certain parts of the world which are just so different and so much more demanding and complicated and difficult to get over than here.

For example, studies show that for every year that a young girl stays in high school, that will cut in half her risk of being infected by HIV/AIDS.  And that is why as part of today’s initiative, $40 million in PEPFAR DREAMS funding is going to be dedicated to helping young girls access school and remain in school.

Second, we will work to address early and forced marriage, a practice that too often prevents girls from developing their social and economic potential, and often, given the practices in certain parts of the world, winds up with young women being literally used, abused, and discarded and then left out in the world with obviously the worst of circumstances.  We believe, needless to say, that governments need to be playing a leading role in preventing this practice.  And today we’re announcing a $7 million effort in Afghanistan focused on enabling adolescent girls to be able to make informed decisions about their futures.

And finally, we will collaborate with government officials, NGOs, and community and religious leaders in order to educate local populations in order to end female genital mutilation.  And that is a practice which has no health benefit, it has no centrality to any religion whatsoever.  And in particular, I am pleased to announce that we intend to contribute to the UNFPA-UNICEF program to bring an end to this harmful, barbarian practice.

The global strategy that we announce today is not just another policy that we’re going to sort of put into a document and then file away somewhere.  I can promise you that, folks.  And we’re not going to just dust this off when it’s convenient.  And I know that.  With Cathy’s leadership and others, this is going to be pursued on a daily basis.  It is now part of – and I want it to be part of – our foreign policy DNA henceforth.  And this strategy is going to be laser-focused on the real-life needs and hopes of young women.

An example:  A woman by the name of Sangita Pal, who grew up in a poor neighborhood in Mumbai and who spent her earliest years hearing the same advice from everybody around her:  Marry early.  But Sangita understood that staying in school would be a better ticket to greater independence and to a life that she wanted.  So she persuaded her parents to let her finish high school, and she is now studying at one of Mumbai’s top universities.  As Sangita said, “Our communities believe we should stay home and just get married.  But we all deserve a better life, and that comes from education.  Why can’t I have that?” she asked.

Well, our answer to Sangita and to millions of young women like her, and to adolescent girls everywhere, is:  Yes, you can have that better life, and you should be given every single opportunity to pursue it and to make your own choices about your own future.

So a better life is what brings all of us here together – to organize our efforts, to focus on this, and to make certain that we are reaching out as far as we can, as often as we can, to make it clear to people that they are not alone, they are not abandoned, and that we are going to do everything in our power to make certain that we can translate this all-important but simple promise into a reality.  And that is a fight worth fighting.

Thank you all very, very much.  (Applause.)