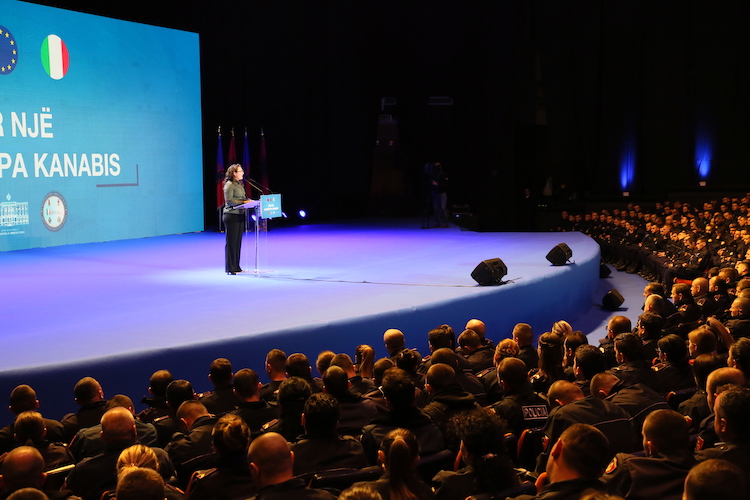 I would like to start today by thanking Minister Lleshi for the invitation to speak today on this very important topic.

The war on illicit drugs is not just a campaign – it is a cause for democracy.  It is a show of force for rule of law, anti-corruption efforts, and justice reform.

And as we gather today to mark the fight against cannabis production, I want to acknowledge the hard work of the Albanian State Police and all law enforcement elements of the Albanian government that are committed to this cause – for the significant progress in reducing cannabis cultivation.

I want to bring special attention to the efforts of the Albanian State Police who are fighting for rule of law.  The ASP has been the tip of the spear in this multinational effort to reduce the amount of cannabis produced inside Albania’s borders. And the effort has not been easy. Due to the remoteness of many of the cannabis plantations, police officers have hiked long distances, in miserable weather conditions, with 28 kilo packs of eradication equipment on their backs to complete their mission.  Yet, these dedicated officers have worked relentlessly to stop production at its source. Along with important multinational intelligence cooperation, and essential overflights and imaging by the Italian Guardia di Finanza, great strides have been made both in stopping the production and seizing the product.  I think we can all acknowledge that it is harder to cultivate and traffic cannabis in Albania today than it was even two years ago. But:

WINNING A BATTLE DOESN’T MEAN WE WON THE WAR – THE FIGHT MUST CONTINUE: Cultivation and the movement of cannabis are only part of the problem.  Now, stronger deterrents should be put in place to stop drug traffickers from viewing Albania as a permissive environment for their illicit activity.  This is where maintaining momentum on justice reform is vital.  Drug traffickers should face the full continuum of justice – arrest, fair prosecution, and conviction with an appropriate jail sentence.  The people who run these networks should scared.  The capture of Klement Balili, Arber Çekaj, and Met Kanani should serve as milestones in this longer-term effort.  Now it is up to the prosecutors and courts.

WE CAN’T WANT IT MORE THAN YOU WANT IT. The United States is with you, but we depend on your political will and your continued courage to drive the good fight for democracy and rule of law.  We will continue to actively support the formation of the SPAK and the NBI to ensure politics can no longer play a role in supporting this illegal activity nor tip the scales of justice in the favor of criminals.

The United States stands side by side with Albania in this fight, because illegal drug cultivation, usage, and trafficking poses a significant threat to both national and international security.  It produces dirty money that fuels transnational organized crime, emboldening mobsters who can then weaken democracy by wielding social and political influence.

WE MUST FOLLOW THE DIRTY MONEY: We must send a clear message that Albania is not, and will never again be, a permissive environment for illegal criminal activity.  Reducing production and making arrests must be followed by seizing assets, and appropriately deterrent sentences.  Reducing cannabis production is a great start to addressing Albania’s larger role in trafficking narcotics, but attacking money laundering and the monetary proceeds of the trafficking of heroin and cocaine into Western Europe is the next important step.

I congratulate all those involved in this fight for democracy and rule of law – and the good fight for the future of all Albanian citizens.  The United States thanks you for your dedication and daring, your skill and your sacrifice.