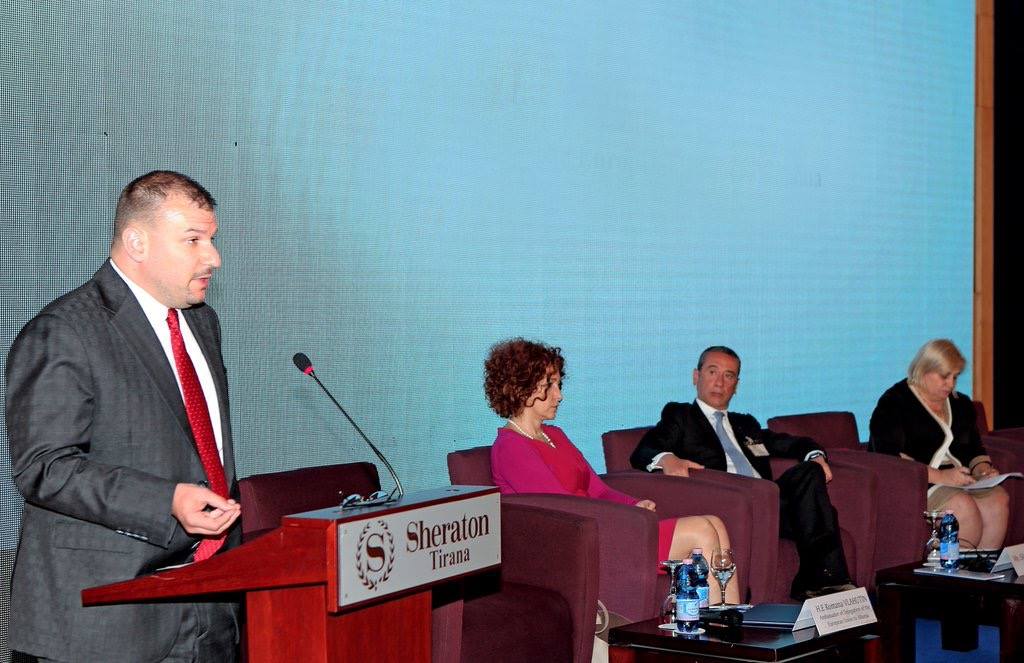 Thank you to Mr. Pedrazzi and FIAA for allowing me the opportunity to address you today.

Many of our public remarks have been focused on rule of law and justice reform.  Today I want to expand on those topics and speak more specifically about the critical relationship between rule of law and foreign investment.  Without a better justice system, Albania will continue to face serious challenges attracting investment and growing its economy. And I will touch on some of these this morning.

As we surveyed the business community about their experience with the justice system in preparation for these remarks, most companies simply told us they don’t bother with the courts here anymore.  U.S. companies rarely come to us with court issues because our longstanding policy has been to avoid getting involved in court cases.  U.S. investors avoid the justice system in Albania because they have lost faith in it.  That is not a very encouraging sign.

Costs of this situation are very high.  Albania loses millions of dollars in potential foreign investment every year due to its failed judicial system.  In the past year alone, we have spoken with multiple companies — one seeking to invest up to $250 million. These companies have opted to invest elsewhere out of fear that they would not be able to get a fair trial in Albanian courts.

There was one specific observation we heard over and over again – the courts in this country exist to serve the corrupt at the expense of legitimate businesses.

This leads to many other challenges.

One of those is the cost of litigation.  When foreign investors avoid domestic court systems, they either try to settle disagreements through international arbitration, or they simply accept the loss and move on.  The first option is extremely costly.  If firms perceive they will have to retain expensive legal help to hedge against the cost of arbitration, they may not go ahead with the investment.  The second option – moving on – can actually be quite worse for Albania in the longer term.  While there may be no court case, the negative “buzz” resulting from an investment loss damages Albania’s reputation as an investment destination.

This is not just a theoretical possibility.  It has, unfortunately, happened in some cases.

The lack of effective legal defense for investors has a massive negative effect on Albania’s investment climate.  There is tremendous pent-up demand to invest in this country.  Everybody knows that. You can unblock this demand by offering fair and efficient court proceedings that serve all interests fairly.

Another issue that has come to our attention is Debt Collection.  Corrupt actors often use the judicial system to avoid paying their debts.  One U.S. company we spoke with recently has five clients who have simply refused to pay for services.  Despite the fact that there are clear-cut contracts, the companies have bribed judges and prosecutors to avoid being forced to make these payments.  Of those five cases that this company has taken to court, it has lost two and the other three have been delayed for multiple years.  The U.S. investors behind this company have canceled their plans to expand investment in Albania based on their treatment in court.

Another issue is inconsistency.  In a professional and effective court system, companies generally know if they have a strong or weak case and can plan accordingly.  In Albania, the merits of cases often do not matter.  Companies do not have any idea how their case will be handled or how long it will take to resolve.  One U.S. company recently had a judge overturn a previous ruling that the judge had issued a few days earlier.  This lack of predictability, professionalism, and transparency makes it impossible for companies to plan their investments.  The company in question has also left the Albanian market.

One of our staff members recently had lunch with an attorney in Albania who had a distinguished career at a major US law firm.  He now lives in Albania where he is the chief partner in his own firm.  He handles commercial transactions – contracts, business disputes, etc.  This attorney told us that he will not represent his clients in court in Albania because he can’t look them in the eye and promise that justice will prevail in Albanian courts, no matter how clear the contract and no matter how aggrieved his clients may be.

There are many distinguished, successful Albanian-Americans who would like to invest here.  Frequently, we hear from them. We also frequently hear from them that they cannot do so because of problems with the justice system.  This is really unfortunate.  These members of the diaspora represent a valuable link between Albania and international investment opportunities, and could serve as a bridge to bring in investors like they have in countless other countries.  Many of them, however, have had bad experiences and each one is a missed opportunity.

When we discuss the inconsistencies from the court system, there is a specific issue that also deserves mention.  This is the well-known problem of property cases.

I have been in Albania less than a year, but I have personally heard many, many stories from Albanians about their experiences with the court system related to property cases.

In one case I am aware of, a family which was restituted a piece of property has not been able to finalize possession for over twenty years.  Other claimants emerged and convinced judges to award them the land instead.  This is a common problem.  What is very remarkable about these cases is that there is very frequently no transparency whatsoever in the court process.  The new claimants meet with judges privately and the original owners have no opportunity to even contest the claims being made.  Years later the case is not finished and the eventual result is not clear.  There are in certain cases multiple claimants with overlapping claims.  Court procedures are not followed, giving the impression that the rules are determined by the highest bidder.

This chaos around property cases is frequently cited by investors as yet another way that the justice system is discouraging investment.

We understand that the government is working to correct many of these issues.  In particular we know that the Ministry of Justice and others are trying to resolve the compensation claims.  I will not comment on the specific solutions being discussed, but I would urge that this be resolved quickly and clearly.  Decisions must be made on the rule of law – not on the highest bidder.  Determinations must be made about documentation and land titles, to determine what is and what is not a legitimate claim.

So, although I’ve been quite frank today in my remarks, I would like to conclude with a word of encouragement about the business climate and about Albania’s reputation.  The problems that have been created can be undone.  Perceptions can and do change.  If one surveys the best emerging-market investment destinations today, one will see places on the list which no one was looking at just a few years ago.  Albania is well-placed to become a star attractor of investment in this region.  Last week I had the privilege of joining Governor Sejko and many other senior diplomats to discuss the challenges facing Albania’s economy and the investment climate.  As the Governor pointed out, despite the challenges there are many bright spots – a solvent and capitalized banking system, several important reform efforts underway, and tremendous potential for growth in a number of areas.

Along those lines, we have seen the government undertake difficult but necessary reforms of the energy system and now the tax system.  The latter effort has been criticized but it continues to move ahead, and success in this area is necessary not only to regularize the economy but to attract investors as well.

Justice reform however, remains the most critical reform for improving the investment climate.  A good climate, strong agricultural opportunities, potential for tourism, and even improved infrastructure are all helpful, but a well-functioning justice system is indispensable for fixing the kind of problems I’ve described above.

Many of the same businesses who told us about the challenges I’ve just described also told us that they were convinced that the justice reform – properly and fully implemented – would be the best way change Albania’s image towards investors.

It’s well known that we are in a crucial phase of the reform process.  The Venice Commission has spoken and Parliament’s Ad Hoc Committee has taken up the legislation.  This reform is critical and the current draft has been assembled by many experts over many months.  To the Parliament, I say it’s time, high time, to get this reform done.  While there are negotiations that need to take place before the final draft is written and voted upon, it is too late for substantial changes to important parts of the reform.  Let’s move ahead and finish the job.  There is no time left for delays and endless argument.