Home Home | News & Events | Remarks by Under Secretary of State for Energy, Economic Growth, and Environment Keith Krach, at the Office of the Prime Minister of Albania 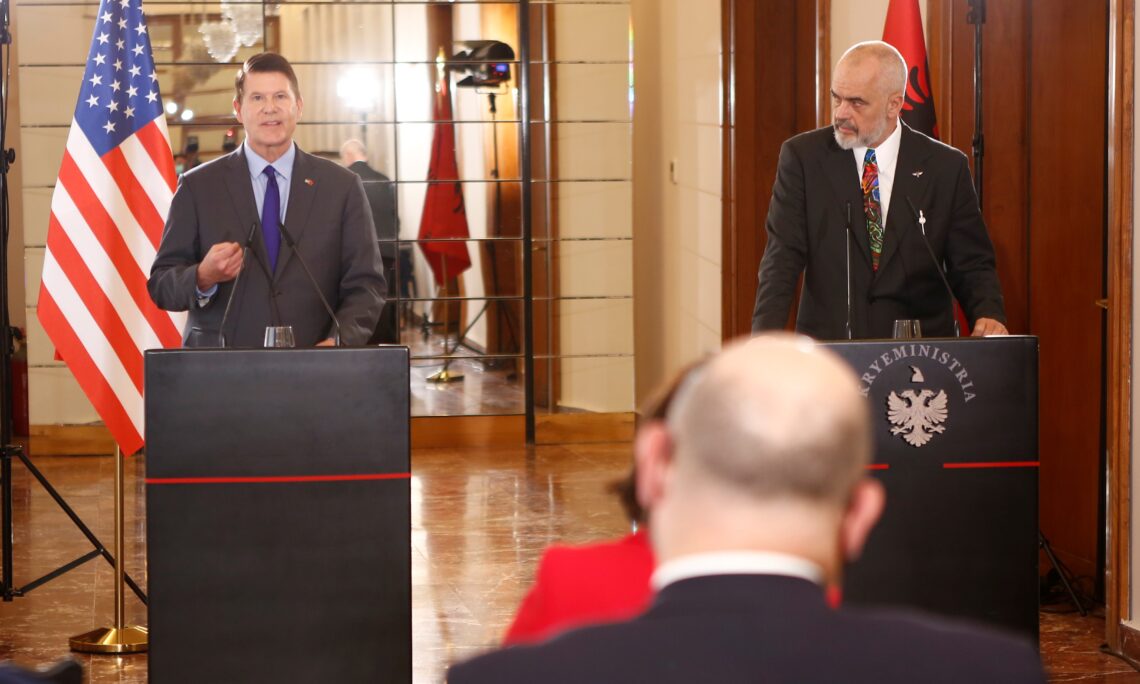 It’s an honor to be here in Albania and to have an opportunity to meet you. Mr. Prime Minister, you’re quite a leader and I’m so excited to open up this next chapter and take our partnership to the next level. I don’t think there’s any other place I’d rather be than right here, right now, at this time.

And also, on behalf of President Trump and all citizens of the United States, I want to thank you and the Albanian people for your great hospitality and partnership, but most of all, your friendship— and by the way, friendship in good times and tough times.

We wish a speedy recovery to all Albanians suffering from the coronavirus and mourn all those who have lost their lives.

Let me also express my gratitude to this great country of Albania, as a fellow NATO member, for contributing your brave troops toward U.S.-led missions in Afghanistan and Iraq, and for your support in all counterterrorism efforts.

Mr. Prime Minister, Albania is the final stop on my ten-city, eight-country swing through Europe, which included meetings, in-depth meetings with the EU and NATO officials.

One interesting thing I’ve found on this trip is that there’s a common recognition by government leaders and private sector CEOs all across the continent of the threat to data privacy, intellectual property, and national security. This threat is brought on from aggressive intrusions by malign actors, such as the Chinese Communist Party.

As President Trump said, your outspoken support in favor of secure telecommunications networks is setting a strong example. It’s a role model.

Just as NATO and EU officials I spoke with, you understand that the Transatlantic Alliance is only as strong as its weakest link.

The Clean Network and the Clean EU 5G Toolbox were developed exactly for that reason.

The Clean Network is rooted in internationally accepted digital trust standards. It represents the execution of a multi-year, enduring strategy, built on a coalition of trusted partners, countries, and companies.

The Clean Network momentum sparked a tidal wave of countries and companies to take a principled stand against untrusted “high-risk” vendors, such as Huawei.

So far, more than 20 NATO and EU countries are part of the Clean Network, based on the EU 5G Toolbox, countries like the UK, France, Czech Republic, Poland, Sweden, Greece, Estonia, Romania, Serbia, Kosovo, Slovenia, Slovakia, Denmark, and Latvia, among others, have chosen to include only trusted vendors in their 5G network infrastructure.

In addition to the countries I just mentioned, some of the largest telecommunications companies around the globe are also becoming Clean Telcos. Telefonica, Orange, Jio in India, Telstra in Australia, SK and KT in South Korea, and all three telcos in NTT in Japan, Luxembourg, Singapore, Canada, and the U.S. are rejecting doing business with these tools from the Chinese Communist state, Huawei, which serves as the backbone for that surveillance state.

And, of course, Albania as a 5G Clean Path country. We can’t thank you enough.

Albania’s One Communication CEO Emil Georgakiev recently said, “One Communication continues to show its commitment to the highest standards of network security for our customers and our partners by using only trusted equipment.”

Mr. Prime Minister, I want to thank you for your leadership on the critical issue of 5G security and the commitment by the Albanian government to the Clean Path initiative.

Albania has joined the tide toward the Clean Network, and we are excited about continuing to expand our partnership in many areas of economic collaboration.

That’s why today, I am pleased to join Minister Denaj in signing a Memorandum of Economic Cooperation between the U.S. and Albania.

It’s a crucial step and I think a great catalyst in paving the way for increased commerce and investment, including through a future Economic Dialogue between our two countries. We’ve really outlined the framework for it. Increased foreign investment especially for firms from the United States will create better jobs and opportunities for the young people of Albania and help create a better business environment.

I am also thrilled to witness the signing of an agreement between America’s largest construction company Bechtel and Albania for the construction of the Skavica hydropower plant.

It is an ambitious much-needed project that will provide energy security and environmental benefits for Albania.

I don’t think you could have picked a better partner for your hydropower plant than the firm that built the most famous dam in the U.S.—the Hoover Dam—and other renowned construction projects.

Skavica will bring Albania additional clean energy, reduce flooding, and make Albanian power generation less dependent on annual rainfall, as you were sharing with me.

This historic project will be a national asset for the people of Albania and one that continues to build on our already close ties.

In closing, let me echo the letter that President Trump sent to you, Mr. Prime Minister, just a couple of days ago.

“Thank you for Albania’s leadership in the Balkans region and throughout Europe in exposing the Chinese Communist Party’s malign influence, human rights abuses, and “debt trap diplomacy” on their One-Belt One-Way Toll Road to Beijing.”

We are grateful for your vocal support for secure telecommunications networks.

So, on the heels of our Memorandum of Economic Cooperation signing today, I look forward to the United States and Albania signing a Memorandum of Understanding on 5G security.

Mr. Prime Minister, as I mentioned earlier, I have crisscrossed Europe over the last two weeks, I’m so happy I saved the best for last.

Thank you again, for the Albanian people’s continued friendship and for your warm reception. I will never forget it.