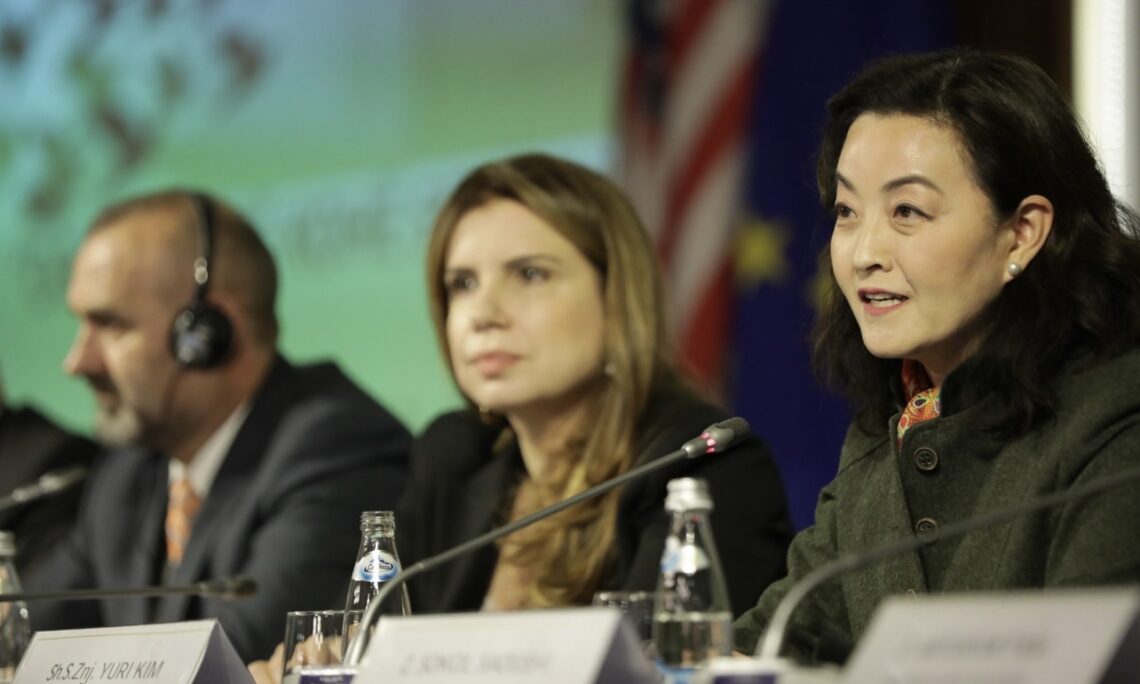 Thank you Chairwoman Llagami, Minister Manja, other distinguished colleagues. I’m still thinking about the comments that came before mine (those of Justice Minister Manja). I have been in Albania for over two years and I think you know by now that I’m clear to the point of being blunt and a little bit undiplomatic. So, let me once again be clear and a little bit undiplomatic.

What is justice? What is justice reform? What is the purpose of justice reform? What does Albania look like when justice reform has been implemented? According to the norms and practices of your friend, the United States, and your future family, the EU, we’ll know that justice reform has been successful when it is no longer considered normal to have judges and prosecutors who are engaged in misconduct. That’s why we have the vetting institutions and the vetting function. It will also be considered successful when we no longer think it is appropriate for political leaders in power or out of power to call for the prosecution of this one or that one; to say that justice is only served when the other one is put in jail and to claim that justice is not served when my one is put in jail. That’s not justice – those are not the standards that we are seeking to help you achieve in Albania. Those are not the standards that the Albanian people are demanding when they talk about justice reform.

What people want from justice reform is justice that is truly blind. That’s what that statue (of Lady Justice) means: that justice, the law is blind to position or power, that it is applied equally to one and all, all are equal under the law. It means that when people are prosecuted, they’re not prosecuted because they’re out of power or because they’re poor or they’re powerless, but only because they broke the law; that when prosecutors and judges take action, they’re not doing because someone powerful has threatened them or ordered them, or given them money, but only because the law requires it.

I urge all here to keep this in mind as we implement justice reform. We cannot and we must not continue with the so-called “justice” of the past. The justice that must come to Albania – as a NATO ally, a friend of the United States, a future member of the EU family – is the justice whose standards are in accordance with the EU, that are the norm for Europe and the rest of the Western world, including the United States. It is what the Albanians people expect and deserve, and it is what is required by the EU. The actions of the United States over the last 31 years also make clear that our support for democracy, rule of law, justice reform in Albania is stronger than ever. Just as clear are the expectations of the Albanian people. I urge you to act so that you do not disappoint on any of those three things (expectations of the Albanian people, requirement of the EU, support of the United States) that I mentioned earlier. Let’s keep moving forward. It’s time to create a justice that is truly blind and truly just in Albania.