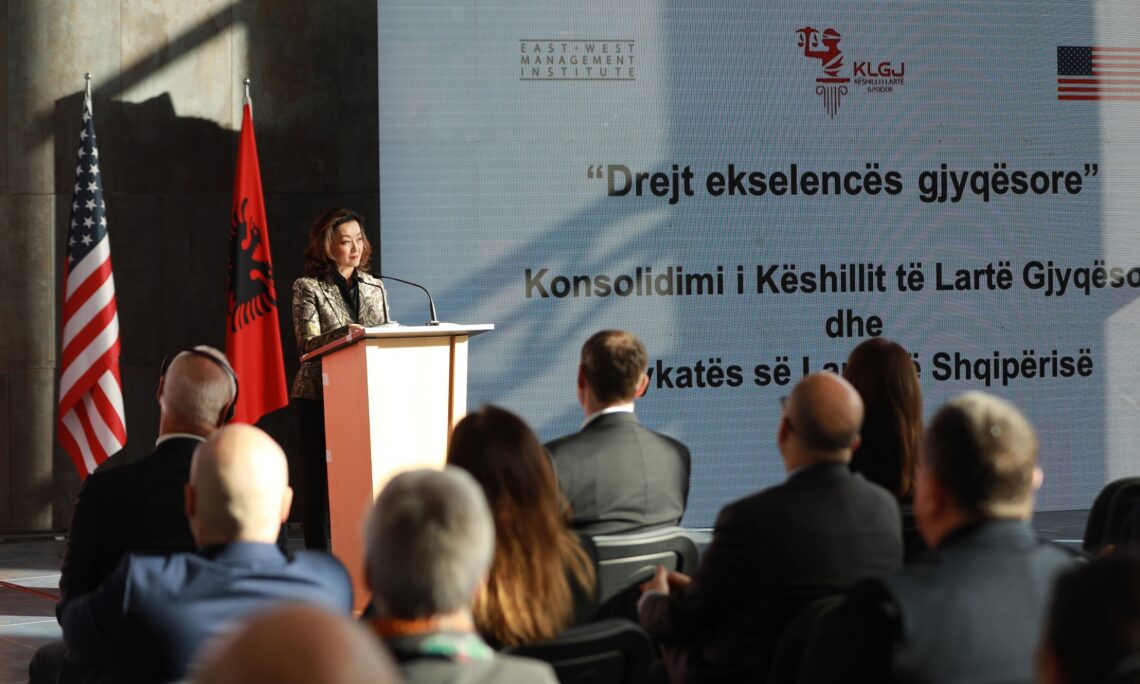 Today, we mark the accomplishments of the High Judicial Council and the High Court. We renew our shared commitment to a truly independent judiciary that serves all citizens of Albania with fairness, efficiency, and justice. As I often say, justice reform is not easy, quick, or perfect. We must strive for constant progress and real results.

You should be proud of your accomplishments. You have established standards of justice in Albania. You have started to reduce court case backlogs. And hopefully, very soon, you will fill the final three seats of the High Court, so it can bring justice for Albania’s people.

With support from the East-West Management Institute, which is a U.S.-funded implementing partner with high international standards, you have established the Council as the leading institution for protecting judicial integrity, promoting judicial independence, and improving judicial efficiency.

And of course, we’re proud to partner with the EU supporting not just the High Judicial Council but all parts of Albania’s judicial reform. We know that judicial reform is important, not only because it fulfills a requirement for EU membership, but because it is the rightful demand of the Albanian people.

Look at how far you have come. Four years ago, there was one judge on the High Court. But after the Council reviewed and processed hundreds of applications, today a full bench of judges is within reach. We’re just missing three, and I hope that those three will be found very soon.

When I arrived in January of 2020 with will, creativity, and determination, it was possible to have a functional Constitutional Court by the end of that calendar year. We’ve got two weeks left in 2022. We’re not going to make it, but I hope that within the first quarter of 2023, the High Court will have all its members. It’s important. Enough time has passed. We have to deliver justice for the people. We have to find a way.

I know the Albanian people, just like the American people, look forward to seeing courts filled with judges who are trained and impartial, capable, and willing to deliver justice. Not revenge. Justice. To know that when they come to court they will be equal before the law. But as far as judges and prosecutors are concerned, those who come before them are the same, regardless of rank or power, or influence.

They know that they will receive justice in a timely manner. That’s why it’s important for us as the United States to support the team of backlog reduction officers who have begun making progress on thousands of cases that have been languishing in court. We can understand fully the frustration of the Albanian people. It’s not right. As Martin Luther King Junior once said, “Justice delayed is justice denied.” Let’s give people the justice they deserve. Let’s continue to make progress and not only continue to make progress, but intensify the progress. We need to get that backlog to zero. It can be done. We will help and it will be done so the court prioritizes the most urgent cases. Keep going as fast as you can. This is a critical time for justice reform and there are reasons to be optimistic for this generation of Albanians.

Justice reform is producing real, tangible, concrete results. But you know what? People also want more. And the United States is on the side of the Albanians because we agree with them. There should be more. This is not a time to rest. We should celebrate the progress that we have made together so far. Together. We’ve done it together.

Sometimes it’s been hard. I don’t think that there have been any times when it’s been easy. Sometimes there have been mistakes that took place. This is a human process. But the key thing is to remain committed to the goal. Serious and sincere, to know that the United States will not stop, and neither should you – that your European partners want you to succeed as much as your American partners do – that you can succeed.

I’ve been here for three years now, and I’ll be here for a little while longer. Here’s what I’ve learned in my three years here. There’s a huge challenge here. It’s not because Albania is uniquely bad, uniquely corrupt. It’s nonsense. There’s history here.

We need to have sympathy and respect for the history that this country has been through, for the experience of the Albanian people, and for the constraints, the challenges that this country faces. It’s a small country. Everybody knows everybody else. Decisions about justice affect all of us in ways that maybe sometimes we don’t even want to admit. Decisions about who gets to be in what positions. Who gets to be the chief of this institution or that institution. They’re somehow all related. But it’s time to say that Albania is ready for the next stage.

We can’t just continue like this. Albania’s been a member of NATO now since 2009. In July, the EU formally began negotiations for your entry. You sit next to us – literally next to us – the United States and Albania at the UN Security Council. You are trusted and respected as a voice on global issues. There are strategic developments that are on the cusp of becoming real in your country. Energy. Transportation. Security. The relationship with the United States across democracy, defense, and business. U.S. investment in Albania has never been higher. Business investment. There can be more. There should be more. But there has to be justice. Businessmen and businesswomen need to know that when they come, and they buy property, that piece of paper is worth something. They need to know when they go to court that is a good thing.

We made progress on defense as well. For the first time in history, the U.S. military is stationed in Albania. Imagine. Could you have imagined that in 1991? Could you have

imagined it in 1997? Could you have imagined it at any point during the Enver Hoxha dictatorship? He is rolling over in his grave!

That’s the future, an Albania that is like the rest of Europe, that is Europe. That’s what we want as the United States, and that’s why we keep investing in judicial reform. We believe and we keep pushing. I know sometimes you don’t like it. I know. I know it’s unpleasant sometimes.

We’re your friends. We genuinely want you to be the best country you can be. We want you to be our partners, capable, powerful, and rich. A country that other countries will look at and say, wow, they did it despite the challenges of being a small country. They chose a difficult path. They walked in. They had a good friend, a few good friends. They made it. But this is the moment we’ve made some progress together. Now is not the time for that. Now is not the time to say this is enough. Now is the time to say we push forward, because our future, the next generation of Albanians, the next generation of Americans, the next generation of Europeans is counting on you. We’re counting on you.

So, let’s roll up our sleeves together. Let’s reconnect. Let’s get that backlog down even further. Let’s increase the pace. Let’s get those judges in place. Let’s make sure that the decisions that are made about who gets to be the leader of this or that institution, who gets to be a prosecutor, who is there, who gets to be a judge, who is vetted, who is not, how those decisions come out. Let’s make sure that those decisions that we make point us towards the future, that they don’t keep us running in place, so they don’t point us backward. We can’t go backward. We have to move forward. And this is the time to do it.

Let’s take it to the next level. It’s a good time to think about all that we’ve done together in the last few years and think about where we want to go in 2023. It’s always the people, always forward, always together. Thank you very much!