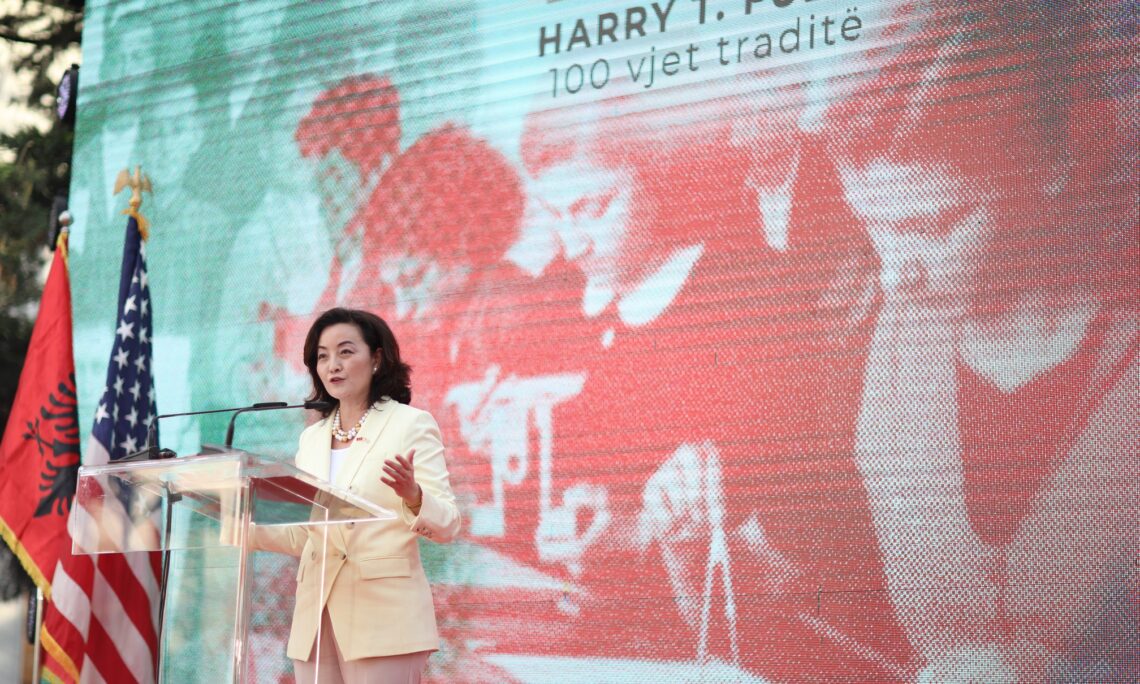 One hundred years ago – in the same year that the United States and Albania formally established diplomatic relations – Harry Fultz became the head of the Albanian Vocational School that had been founded the previous year by the American Red Cross Youth Corps.

Those two momentous events of 1922 – the arrival of Harry Fultz and the establishment of diplomatic relations – laid the foundation for a unique bond between Albania and the United States, a bond that persevered despite the communist dictatorship, a bond that was renewed in 1991, a bond that today is stronger than ever.

This school was among the first U.S. investments in Albania.  This school was not only about teaching technical and professional skills – it was about instilling in Albania’s youth of with the sense of patriotism, discipline, and respect for work that they would need to build a new nation.  Indeed, students and staff of this school built the American Embassy.

This connection with America – combined with Albanian patriotism, discipline, and respect for work – became fatal when the communists seized power.  Among those who were killed by Enver Hoxha were Loni Adami and Kol Kuqali, alumni who were also the first Albanian employees of the U.S. Embassy.  These two men were killed, but the ideals they embodied never died.

In 1991, when the communist regime fell and the United States and Albania reestablished diplomatic relations, this school was renamed the “Harry Fultz Institute.”  And when the United States reclaimed our embassy – the same one built by the hands of your predecessor – we asked Andromaqi, the widow of Loni Adami, to be the one whose hands would raise the American flag again.

The Harry Fultz Institute is truly an inextricable part of the history of U.S.-Albanian relations. As we celebrate 100 years of the Harry Fultz Institute and of U.S.-Albania relations, I would like to think that Harry Fultz would be proud to see what has become of the country and the people that he loved so much. He would be proud to see that his students have heeded his encouragement to “strive to make Albania a country worth living for and, if necessary, worth dying for.”