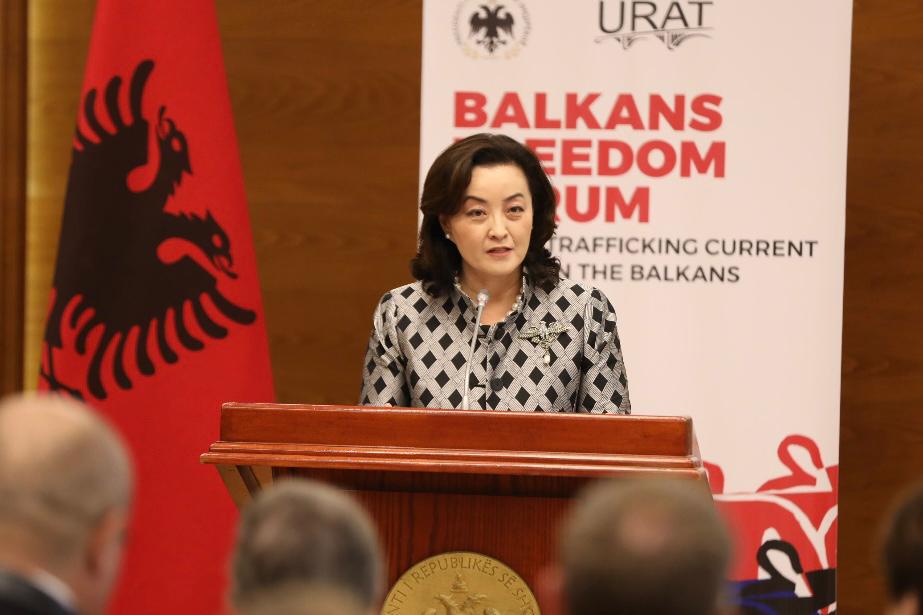 It is wonderful to be here with you today to discuss this very important topic. I think just the presence alone of two heads of state tells you that this is an important issue that brings all of us together. And I must also say John, Ambassador Richmond, that your remarks were truly informative and inspiring, so thank you for that.

I would also like to thank the United Response Against Trafficking Network and President Meta for organizing this forum to discuss human trafficking trends in the Balkans and best practices for eradication. I am also very pleased that several members of the United States Congress, on the House side as well as the Senate side, from Republicans and from the Democrats, are here with us virtually and in spirit, and I know that every person who has held the position that Ambassador Richmond has held, feels very strongly that this is an issue, trafficking in persons is a litmus test for humanity in a sense.

Looking around the room, I am confident that Albania with its international and non-governmental partners is committed to confronting the scourge of human trafficking. Within that cohort of dedicated people, I would like to pay special tribute to Sister Imelda Poole who was recognized last summer by the American Secretary of State for her outstanding work as one of eight global Trafficking in Persons Heroes. So thank you Sister Imelda!

I would also like to recognize the fact that the Government of Albania has taken steps to increase prosecutions of alleged traffickers, with a significant increase in the number of perpetrators convicted in the past year. So, a little bit breaking of the bad global trend. But we need to see more. At the same time, the government has increased resources to NGO-run shelters and NGO-led mobile units that have helped identify more victims of trafficking.

And Ambassador Richmond, I want to go back to a point that you made, that the therapies and the programs that we have to deal with the victims of trafficking should be tailored and be fully cognizant that what we’re talking about is not just a nameless, faceless mass of people. We’re talking about fellow human beings. Each one a loved, valuable member of our community.

It is good that the government has also adopted a National Action Plan for addressing Trafficking in Persons with allocated resources.  These are important steps, but as we all know there’s much more that must be done.

Every year, the State Department publishes the Trafficking in Persons Report, which contains a list of prioritized recommendations intended not to criticize, but to help, to serve as a roadmap for continued progress and for continued cooperation between the United States and Albania.

For example, while this year saw an increase in prosecutions and convictions of traffickers, this needs to be a yearly trend that shows continuous, continuing improvement to resolve the trafficking issue. Mobile victim identification units need dedicated funding and staffing to help throughout the country, and proactive screening of groups most vulnerable to trafficking prevents future victims. We believe that the will exists and it exists throughout Albania’s leadership, doesn’t matter what party, doesn’t matter what part of the country, I think this will to address this issue exists everywhere. And now we have to work together to identify the way forward.

The U.S. government has contributed resources to help and we’ve done that for years. We have funded a project through the United Nations Office of Drugs and Crime to support trafficking victims, as well as those prosecuting and investigating trafficking cases. No country can do this alone, solutions have to be transnational and regional, so a regional approach strengthens anti-trafficking systems across the Balkans and efforts to identify trafficking victims and hold traffickers accountable. And that’s why it is so important today that we not only have speakers from the United States, but we have one of our most important neighbors here, an acknowledgment of the fact that this is a regional, transnational issue.

The fight against human trafficking has been a top priority for the United States across administrations and I doubt that that’s going to change. The United States has been very clear about our support for those who take part in this fight, for those who are at the front lines. To the shelter workers, the civil servants, the police, and the prosecutors who protect the victims, prevent the crimes, and prosecute the criminals, we want you to know: we’re with you, we’ll always be with you in this fight. We urge you to seize the opportunity that today’s forum presents, to analyze the supply chain that enables human trafficking and to identify best practices to break it.

I would also like to particularly thank the brave men and women, the officials, and the committed members of civil society here who are working tirelessly to support and protect trafficking victims. This is a difficult, but obviously very necessary aspect of the fight against trafficking in persons. I hope that today’s discussion will be fruitful and that you all emerge energized to combat human trafficking. I have to say I feel a little bit more energized just being in your company as well. Thank you again for hosting this for bringing us all together. And I look forward to the discussion.