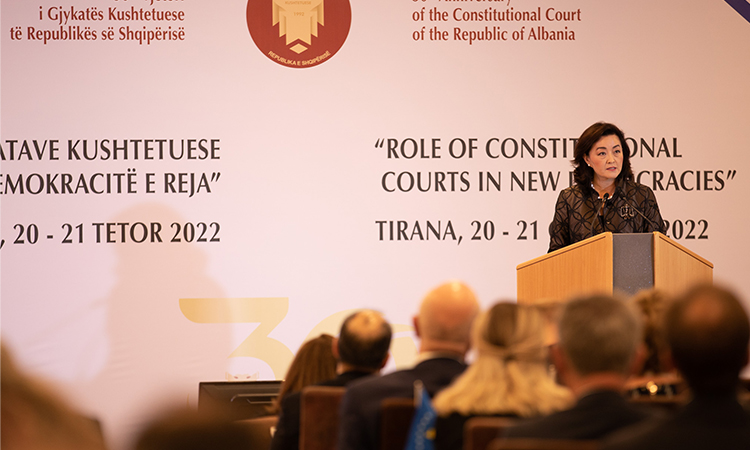 It is a wonderful day today to be able to be with you to commemorate the 30th anniversary of the founding of the Constitutional Court.

Today, we mark an important milestone in Albania’s democratic evolution. The Constitutional Court is a cornerstone of the emerging democratic changes in Albania, which started in the early 1990s.

The Court has undergone substantial changes since its foundation.  And you have committed to real change that promises a brighter future of constitutional justice in Albania, anchored firmly in fundamental principles of the rule of law.

The reforms that came in 2016 were extremely difficult, but they were necessary. And thanks to those changes, the Constitutional Court is able to conduct its work based on a framework of clear legal criteria for those who aspire to become judges on this court. The U.S. is proud to have supported the Court through these transitions, through its most difficult moments – from the challenging, but necessary step of vetting all the judges and prosecutors, to the triumph of selecting qualified judges to join the Court to regain its full functionality in late 2020. And I look forward to a day when the Court has every seat filled by a vetted, qualified judge.

As we often say, justice reform has not been easy, quick, or perfect, but it is making progress and it is beginning to deliver real results. Those who object to that progress, those who would rather not have real results, are also redoubling their efforts. They would like to drag Albania back to the past, to a time when judges and prosecutors could be bought or threatened – to a time when normal Albanian citizens did not believe that there was such a thing as justice in court, when believed they didn’t have the power, the money, the connections to build a life for themselves in this country, for themselves, for their children.

For too long, the old ways have persisted. So, to those of you, who want to drag Albania back to the past, drag it, kicking and screaming, its people suffering, I say to you: Stop. Stop. Your time is over. The time of making phone calls, sending emissaries, sending gifts, sending threats – threatening to expose dark secrets from an ugly past, promising gifts, which if accepted, would form the basis for another dark secret, for another dark future. That time is over. You have enjoyed your privilege; you have enjoyed your immunity; you have filled your pockets; you have filled the pockets of your children, your friends. Stop – it’s over. Your time is over.

It is time to let regular citizens be free, truly free. It is time to let the Albanian people believe that there is such a thing as justice in Albania, that it is worth it for them and their children to stay, that there is a future that is brighter, that there is punishment for those who commit crimes, that everyone is equal before the law. That’s what the Constitutional Court should be doing and has tried to do over the last few years. That’s what every court should be doing, that’s what every prosecutor should be doing. Stop taking those phone calls. Stop accepting those gifts. Stop being afraid of those threats. Do your job. Let the Albanian people breath. Let them be free. Let Albania be great.