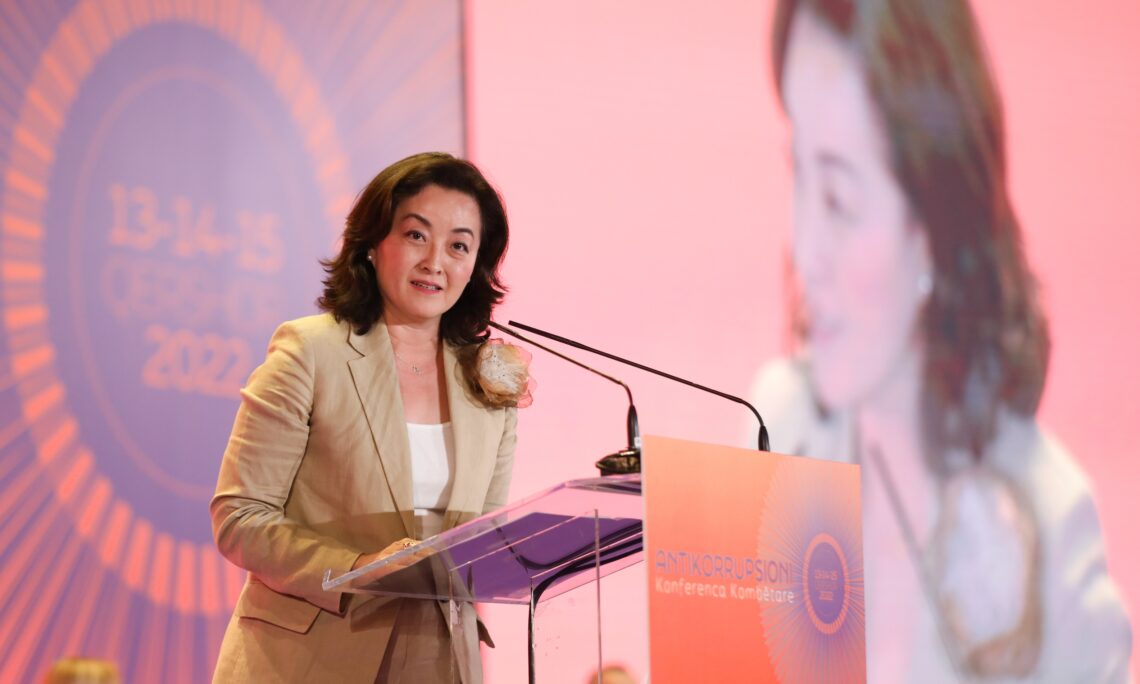 Përshëndetje! It is a great pleasure to be here. I would like to thank the Prime Minister and Minister Milva Ekonomi for organizing this event. I have to guess from the size of the crowd in this hall that this means that the government of Albania is strongly committed to the fight against corruption in a way that exceeds its previous commitment, and for that I think you should be congratulated and encouraged. This is huge.

All of us – you as citizens of Albania, me as a representative of the United States – we have to join forces in this historical moment to say “enough with corruption,” to say that we have to defend democracy, so that Albania and the United States can be stronger. Think about where you are as a country. Last year, we celebrated 30 years of Albania free – free as a democracy, as people who got rid of communism, who got rid of dictatorship. And communism and dictatorship are its own form of corruption. I think everybody here who experienced that, your parents who lived through it, your grandparents understand that that is the truth of dictatorship, communism, and corruption.

So now, here we are, 31-32 years away from the end of communism, a hundred years since the United States and Albania established formal diplomatic relations. If you had said, 100 years ago, even 30 years ago, that Albania would go from being one the poorest countries in Europe, the poorest country in Europe, to being where you are today, a country with a thriving economy – where you can feel the energy – it is inspiring.

But also, it’s frustrating because this country and this people are capable of so much more. What blocks that from happening? Corruption. The reality, the perception, is that I need special connections, I need to make a bribe, I need to give a favor, I need to collect a favor in order to make a change, in order to make a difference, in order to use my talent. That has to end. That’s what fighting against corruption is about. It’s not about wishing that everybody here will follow the Ten Commandments or any other code of ethics, it’s not wishing and hoping that you will all go to heaven, although I do wish that for you – that’s not why corruption matters to the United States. Rather, we consider corruption and the fight against corruption to be a national security issue for the United States because we want our friends, our partners, our allies, we want you, Albania, to be strong, independent, rich, to be a full partner. I have said this before in one of my articles: We want Albania to be increasingly a partner, not a problem. But that problem can’t be solved without you. In fact, you have to lead the fight. A lot of times in Albania we talk about the special role of the United States, and a lot of times when I talk to people around this country, I hear people say: Only you, only you can do this. But what I want to say is: only you must do it. The United States as your friend and ally, a partner, will be with you every step of the way, every single step of the way. Some steps will be difficult, but we will be with you. Sometimes we will push you, sometimes you will be tired, and you don’t want to go on. Sometimes we will be tired, and we will not want to go on. But that’s what friends are for, that’s what friendship is about. We will be together. This is a moment in your history when you can step up, rise to the next level.

We have talked about how far Albania has come in a hundred years, thirty years.  You are a member of NATO, you are on the doorstep of the European Union.  In fact, you will be a member of the European Union. Every single member state agrees that Albania has done all the necessary work to be a member of the European Union. They have to work on some of their politics, but you will be a member one day. In addition to that, two years ago, Albania was the Chairman in Office of the OSCE. Other countries look to Albania for the standards of democracy and freedom. And now, as of January 1st, you are a member of the UN Security Council, the most important body that exists in the world. You sit next to the United States, Russia, China, France, the United Kingdom. You decide on the most important issues that come before the world. You are the leader, with us, the United States, on issues related to Ukraine. Your ambassador at the United Nations is a superstar. Your Prime Minister is requested to speak on issues related to Ukraine, and will also be asked to talk about other issues. Why? Because Albania matters.

You are at a different level. It’s now time to make the tough decisions to go to the next level. You can’t do that if corruption is seen as normal, if it is seen as acceptable. As I mentioned before, we say this not because the United States is free of corruption. We have corruption too. But we also have laws, and we have a social context that makes it shameful to be engaged in corruption, shameful for an official to ask for a bribe, shameful for the powerful to take advantage of the weak, shameful for someone to avoid the law. And we have a system of laws and prosecutors and judges who are expected to apply the law equally. Most important, we have citizens who are educated and who understand and demand their rights as the basis of democracy.

And so, 30 years – a full generation – since you broke free from the chains of communism, from dictatorship, from corruption, it’s time to make this permanent, to say that the law applies equally to everyone, that no one is above the law, that no one will have impunity. If you break the law, you will pay the price. We do that not because we are vindictive, but because every single citizen in a country as wonderful, with as much potential as Albania, should have a fair shot. I don’t think anybody here is asking for a special privilege. I don’t think that’s what you’re looking for, for your children. I think what you want is for your children to have the same fair shot as everybody else’s children. If they’re talented, if they work hard, they can get a job. If they’re talented, they work hard, they can make enough money to take care of their family.

So, let’s end corruption. Let’s continue to work hand in hand, together. Step by step. There will be times when we stumble. But we will pick each other back up. And we’ll do the hard work because Albania has to move forward. The United States wants to move forward with you.

You are at a critical moment in your history. You have to literally decide which way you are going – are you going forwards or backwards? Who will own your country? Will it be organized crime, and just oligarchs, or will normal people also have the opportunity to earn, to own property, to develop property, and get rich. You have to decide. Will it be the case that everyone here is struggling for special connections, so that they can make it, or will you create a system where everybody is equal before the law and your child is just as valuable, just as free, just as capable and has just as equal an opportunity as the next child? So, this is a real big moment and we believe, as the United States, that you will make the right choice, just as you have at any critical moment. So, thank you for your participation today, and we look forward to continue to work very closely with you.