Home Home | News & Events | Remarks by U.S. Ambassador Kim at the 100th Anniversary Ceremony of the Day when the United States and Albania Established Diplomatic Relations 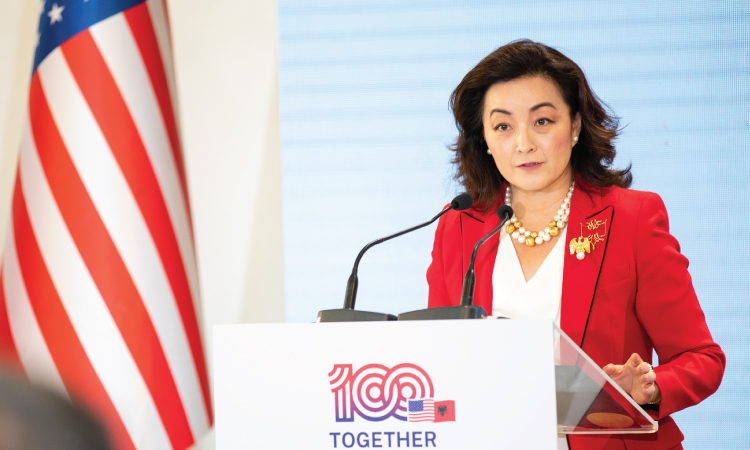 One century ago today – a few years after President Woodrow Wilson declared at the Paris Conference that Albania ought to be an independent and sovereign nation – the American Commissioner in Albania, Maxwell Blake, had the honor of conveying to Prime Minister Xhafer Ypi the United States’ official recognition of Albania as an independent state.  In recognizing each other as nations on July 28, 1922, America and Albania lit a sacred torch that has been passed down through the generations.  During the darkest days of communism, that sacred torch was safeguarded by Albanians and Americans, hidden but never allowed to be extinguished.

Those of us here today have the great honor of inheriting that torch and holding it higher, enabling it to warm the friendship between the American and Albanian people, and to illuminate the way ahead on our shared path forward as the closest of Allies.

As we mark a century of diplomatic relations, we take the opportunity to honor all the Americans and Albanians who came before us and contributed to the U.S.-Albanian partnership, especially those Albanians who paid the ultimate price of freedom and friendship with their lives.

The United States has never wavered – and we never will waver – from supporting the aspiration of the Albanian people for sovereignty, democracy, prosperity, and justice.

As we celebrate 100 years together, I have the honor today to share with you messages from two American Presidents: George W. Bush, the first sitting American President to visit Albania, and President Biden, who has a special place in his heart for the Albanian people.