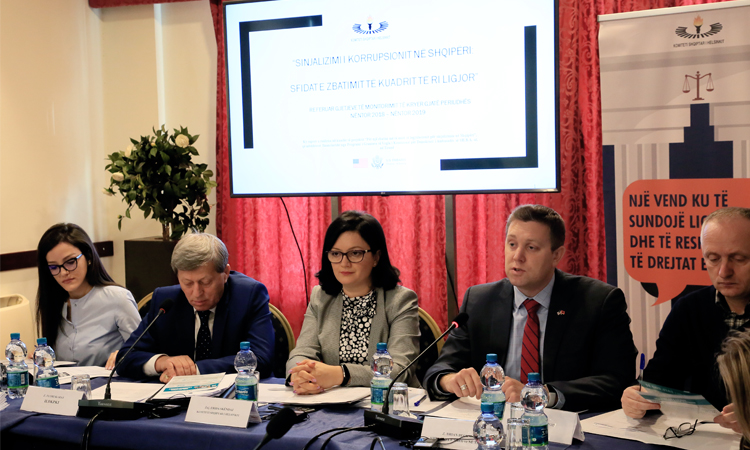 First of all, I want to congratulate the Albanian Helsinki Committee for its work to implement this important anti-corruption initiative.

We all know that corruption is a disease that harms society, the economy, and the daily lives of citizens.  The cure is transparency, accountability, an increase in access to information, and ultimately a more empowered citizenry – including empowering those in positions to witness corruption firsthand.

Today, fighting corruption remains one of the key challenges for Albania in its path towards EU integration.  It is in the United States’ interest to help our Albanian partners in this fight.

Since the passage of justice reform, public cries for action against corruption have increased.  These cries are starting to be answered.  Over the past year, we’ve seen more commitment from the media to report corrupt practices.  We’ve seen organizations take more steps toward fulfilling their watchdog role.  The necessary policies are starting to be put in place with many still in the early stages of implementation.

The whistleblower protection legislation is one of them.

The whistleblower protection law is important in the fight to prevent and curb corruption in both the public and private sectors.  It seeks to protect individuals who identify suspected corrupt practices in their workplace, giving them the confidence to come forward.

While the intentions of the law are good, the implementation stage remains the most difficult part of the process. There is still much work to be done.

This is the reason that the U.S. Embassy decided to fund the Albanian Helsinki Committee’s initiative to monitor government and other independent institutions regarding the implementation of the law.  Through this effort, we hope to not only highlight positive practices but also to identify problems, gaps, and obstacles that need be addressed.

All of this is part of Embassy’s concerted efforts to fight corruption in Albania.

As we have said many times before, we work every day with the institutions who seek to support judicial reform and fight organized crime.  Because together, we can continue to answer the cries of the Albanian people for justice.

I am confident that together we will succeed.