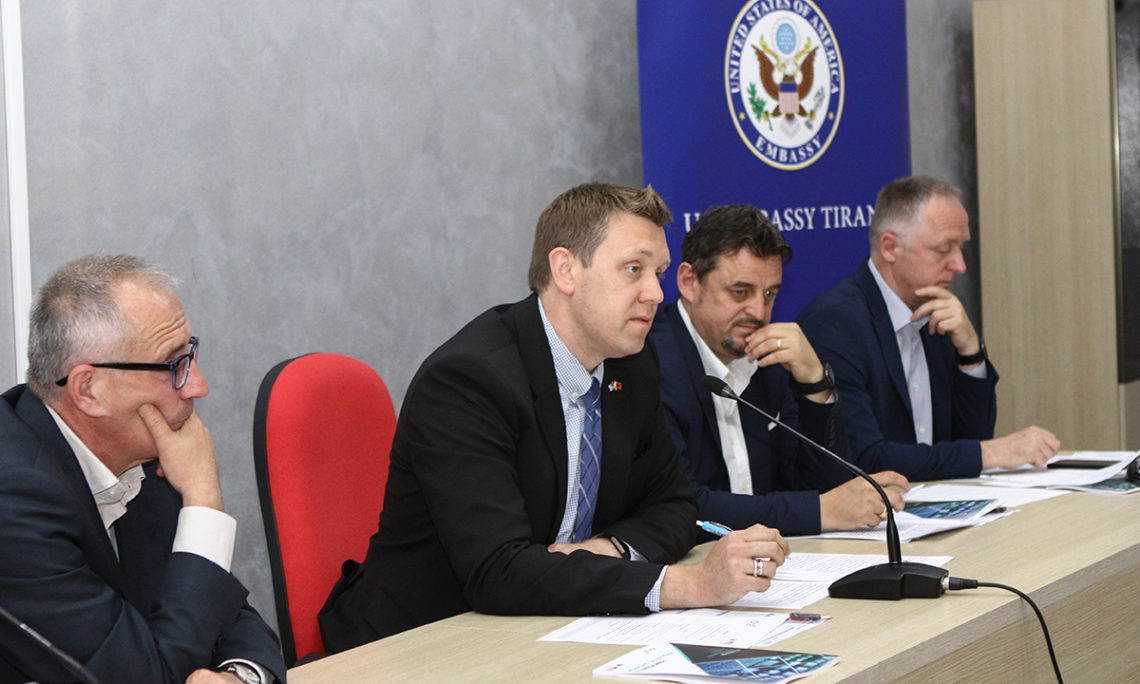 Thank you to the University of Tirana’s Journalism Department for having us today.

Today is a very important day around the world and specifically for you, as journalism students. It marks World Press Freedom Day. On this day, we celebrate the fundamental principles that are at the core of democracy and at the core of your work as future journalists.

The United States values freedom of the press as a key component of democratic governance. Democratic societies are not infallible, but they are accountable, and the exchange of ideas is the foundation for accountable governance.  The press fosters active debate, provides investigative reporting, and serves as a forum to express different points of view, particularly on behalf of those who are marginalized in society.

Freedom of the press is a fundamental human right.  Each year, as part of Department of State’s annual Human Rights Report we examine press freedom. The 2018 report on Albania noted, “Independent media were active and expressed a wide variety of viewpoints, although there were efforts to exert direct and indirect political and economic pressure on the media, including by threats and violence against journalists who tried to investigate crime and corruption. Business owners freely used media outlets to gain favor and promote their interests with political parties. Most owners of private television stations used the content of their broadcasts to influence government action toward their other businesses. Political pressure, corruption, and lack of funding constrained independent print media, and journalists reportedly practiced self-censorship.”

To further explore these challenges and to inform our efforts in media development we commissioned a study on press freedom in Albania. We are here today to present the findings of this research conducted by IDRA. During the past year, IDRA met with hundreds of media professionals and asked them about their profession and its future.  We asked about labor relations, the level of freedom, political pressure, intimidation, and censorship.

The findings of the study highlight the dedication of Albanian journalists as well challenges they face every day in their work.  I would like to emphasize three key findings from the research.

First, the study found that the majority of respondents are confident about the future of journalism as a profession and would encourage those passionate about the truth to enter the field. We at the U.S. Embassy see this as very good sign for the future of Albania and Albanian journalism.

Second, the study found that over half of all respondents said they received an order from a media owner or chief editor to do a commissioned story.  This suggests that media owners maintain a great deal of editorial control, constraining press freedom.

Third, the study confirmed earlier reports of self-censorship. Forty-one percent of respondents believed that “all media censored themselves” and 36% thought there was “frequent self-censorship.”

At the U.S. Embassy, we have great interest in seeing free and independent media succeed in Albania. We invest in the future of journalism by sending several Albanian journalists to the U.S. each year and by bringing U.S. media experts here to work with Albanian journalists and journalism students. We do this in the hope that they can help raise editorial standards and improve the methods journalists use to find and report on the truth.

We invest time and resources to create more local opportunities for those who seek to speak the truth.  Our Investigative Journalism Lab is now in its third year.  This program is a one-year hands-on experience that gives 10 to 12 young aspiring journalists the skills and techniques they need to do better research and to tell more interesting stories.  We encourage you to look out for our announcement recruiting journalism students for the fourth edition of the Lab in the coming weeks.

At the same time, the U.S. Embassy, alongside the Dutch and the Swiss, have partnered with RTSH to produce a bi-weekly show called ‘31 Minutes.”  If you haven’t had a chance to watch, you can find links to some of their stories on our Facebook page or on their Facebook account.  This show serves as a platform for our Investigative Journalism Lab graduates to practice their trade. Through it, we hope they will raise awareness of interesting and important stories and that they will work to find and broadcast the truth.

In closing, I would like to reiterate something Deputy Assistant Secretary of State Matt Palmer told a group of young journalists during his visit to Albania last month: “You are the watchdogs so – be aggressive, insist on getting answers, understand that what you do is important public trust and fundamental to the strength and vitality of Albanian democracy.”

Today, on Press Freedom Day, I challenge you to seek and speak the truth. You can shape Albania’s future.  If you choose to be a truth-speaker, we will stand with you.

Thank you to IDRA for their professional work in conducting this study. Now, I invite Lorena to tell us in more detail about the findings of the study.