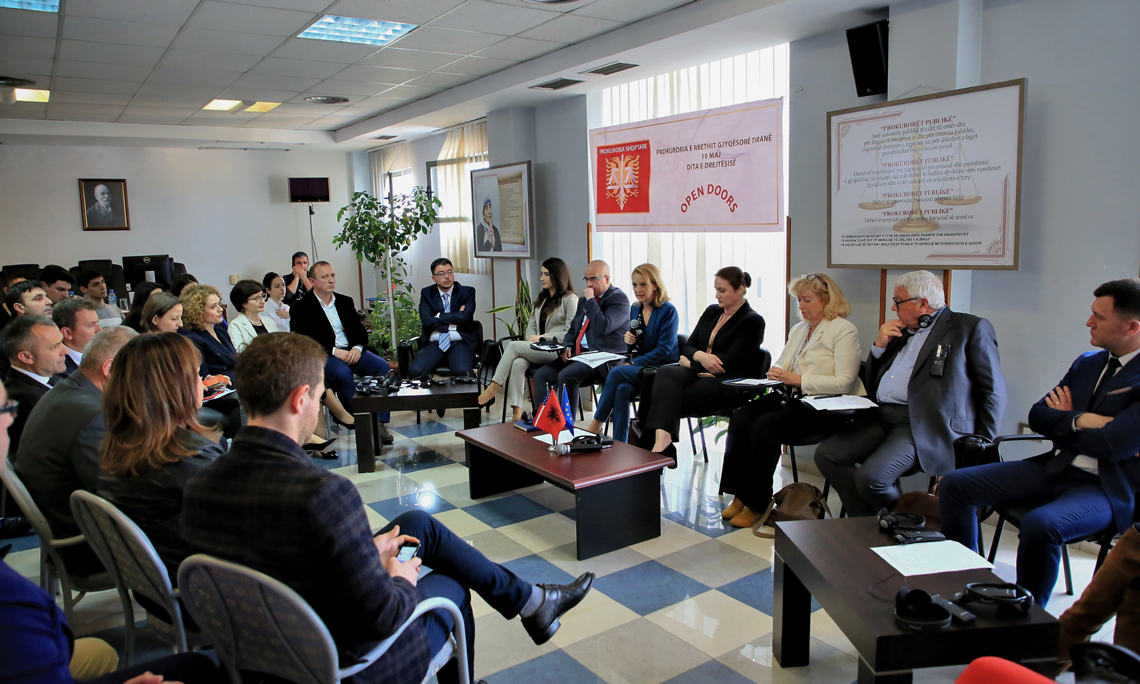 Good morning.  First, I would like to thank Chief Prosecutor Elizabeta Imeraj, Mr. Maasen, Mr. Mandoi, Ms. Jansen, Ms. Mehmeti and all of you. It is a true honor for me to be here with you today.

I am very grateful to the Tirana Prosecution Office for organizing today’s event.

You have probably heard time and time again the importance of transparency and how it plays a key role in rule of law.  That is why events like this one are so refreshing, offering a way to open the doors of the prosecution office to students like yourselves so that you all can better understand how Albania’s criminal justice system works.

I am the OPDAT Department of Justice Resident Legal Adviser at U.S. Embassy Tirana. I started as a prosecutor in 1999 in a busy prosecution office in the greater New York metropolitan area. I was a supervising attorney. During my 12 years there, I handled thousands of cases, including violent crimes, career criminals, gangs and was a member of the narcotics task force. In 2011, I joined the U.S. Government’s rule of law expert team. For the better part of the last 7 years, I have supported the development of a stronger and more efficient justice system in Kosovo.

The OPDAT-Albania criminal justice assistance program is designed to assist the Government of Albania to reform its criminal justice system to effectively combat high-level corruption and organized crime.

We focus on building the new SPAK, allowing it to fight corruption and organized crime effectively and independently, and strengthening the new High Prosecutorial Council, which governs Albania’s prosecutorial system.

The work of OPDAT, in coordination with the State Department Bureau of INL, is just one part of the work the U.S. Embassy is doing here in Albania.  As you have probably heard from all levels of the U.S. government, justice reform and rule of law are two of our very top foreign policy priorities.

Why, you may ask.  Because for us, justice reform and the establishment of rule of law represent a path to a brighter future for the Albanian people.  They are two means that can bring more prosperity to your country and increase accountability between citizens and their government.

The fight against corruption is everyone’s fight. Since I arrived in Albania I have met many people who are discouraged by widespread corruption and how criminals seem to operate freely without punishment.

But the United States has a positive message: change is underway and the process is starting to work.  I also tell them we should celebrate the process.

The recent sentencing of Klement Balili is just one example of how the system, and the process, worked.  A known criminal was arrested after turning himself in, his properties were seized to stop potential further criminal activity, and he received a fair trial, was found guilty, and has now been sentenced.

In the case of Emiljano Shullazi, another nefarious criminal was investigated, arrested, charged, and allowed to defend himself vigorously in a court of law that ultimately rendered a verdict based on facts and the law.

In both cases, process won.  And that victory of the process shows that the system can work when brave, honest and independent prosecutors pledge to uphold their duties with integrity. These cases give other judges and prosecutors hope and inspiration.

Despite threats, judges and prosecutors are showing up now when in the past they might have hidden in fear.  For them I have a message.  We honor your courage and will continue to stand by you as you help build a better future for all Albanians.

And I have another message for you all here today as well.  The system is starting to work.

I challenge each of you to be a part of Albania’s future.

I hope that you too will one day be a brave, courageous legal professional that helps deliver justice on behalf of the Albanian people.