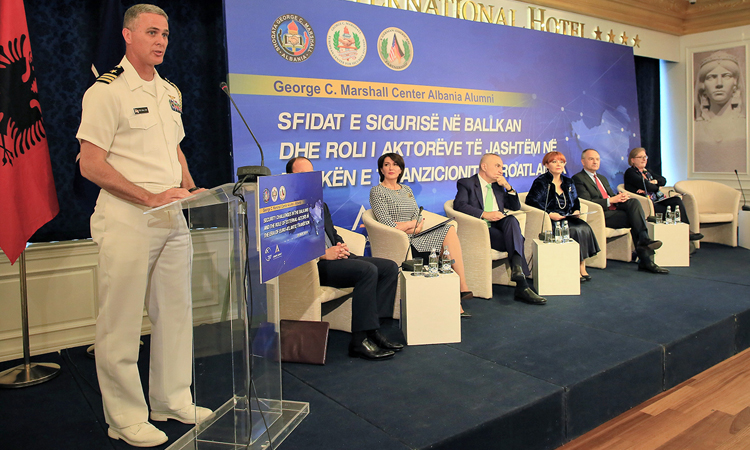 Thank you for the opportunity to speak to you on a topic we all hold dear: security challenges in the Balkans during the Euro-Atlantic transition.

We also continue to support Albania’s development as a stable and prosperous democracy and free market economy. Albania, in turn, has embraced America and strong transatlantic ties. As an enduring partner of the United States and a staunch NATO Ally, Albania has worked with us to support shared foreign policy priorities, including efforts to defeat ISIS, counter violent extremism, and combat malign third-country influence in the region. While we have achieved great success together over the past 28 years, our work is not done. Iran continues its malevolent influence and actions around the world – and we know it has targeted Albania. We welcome Albania’s clear message to Iran’s leaders that their support for terrorism will not be tolerated. We all need to stand up to Iran’s reckless behavior in Europe and across the globe. Russia’s leaders are another external challenge. The Kremlin appears determined to undermine democratic institutions around the world and sow divisions among us.

These threats are not merely rhetorical. Russia has employed nerve agent attacks and malicious cyber activities. It has violated the sovereignty of Ukraine and Georgia by occupying their recognized lands. These types of threats occur both openly and covertly, within NATO’s borders. Albania has been a member of NATO for 10 years, and for 10 years, Albania has made our Alliance stronger.  Even before it joined the Alliance, Albania stood side by side with NATO in Afghanistan, Kosovo, Bosnia, Iraq, and other missions.

Albania has shared in the benefits of NATO, but also shared the burden. Albania contributes more troops per capita than nearly all other European nations.  Like Albania, we remain committed to the principle that we will always be stronger together.  To make the Alliance stronger, the United States remains committed to expanding NATO membership, including supporting North Macedonia as the 30th Ally.  NATO’s doors must remain open for new members who share our values and our promise of collective defense.  Each new Ally strengthens NATO’s collective defense and ability to safeguard our peace and prosperity.

The benefits of membership do not come without cost.  Albanians recently paid the ultimate price and gave the ultimate sacrifice while serving with NATO forces in Latvia. We all grieve with you and extend our deepest condolences to the family and friends of Major Tanushi and Sergeant Hasanaj.  Together, we honor their service and sacrifice. A second security challenge lies not outside each country’s borders, but within.  We need to face the internal threats undermining the countries of the Western Balkans. Our adversaries know our strength is not only measured in military units.

Our strength also comes from a shared commitment to the rights and responsibilities inherent to our democracies, such as the personal freedoms we enjoy and the integrity and transparency of the governments that represent us. These are our greatest strengths.  These are the values and principles we stand for and defend.

To support and foster wider security within Albania’s borders, the United States will continue to promote Albania’s democratic development, and continue to support efforts to combat crime and corruption. We believe Albania’s EU aspirations — and the reforms they entail — will lead to more prosperity and stability for the country and for the region at large.

The EU accession process will strengthen the alliance between Albania and the United States and will solidify the foundation for a Europe that is strong and free. The good news is that Albania is headed in the right direction, though progress must continue.

In order to create an economic environment that benefits everyone, progress must continue on rule of law and rooting out corruption and organized crime.  Justice reform is happening, because Albanians deserve an honest and transparent judicial system, as do all the people of the region.

Albania and the rest of the Western Balkans do not stand alone.  They stand shoulder to shoulder with each other and with the United States.  Only through working together can we overcome the external and internal security threats in the region and continue the unwavering trans-Atlantic march.