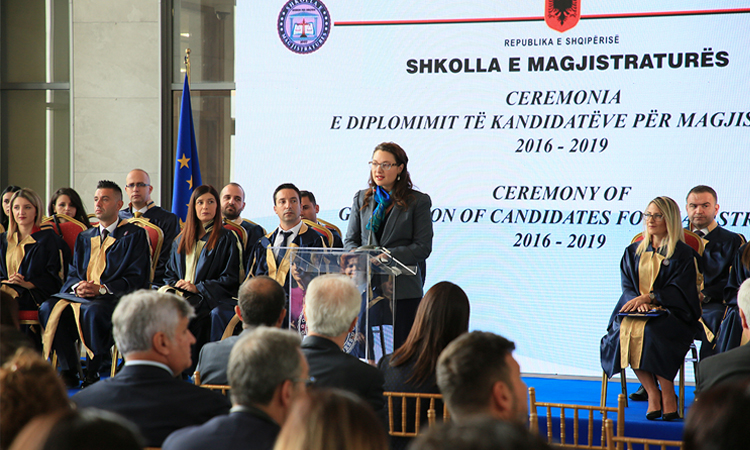 Dear Minister Gjonaj, Prosecutor General Marku, Colleagues of the Diplomatic Corps, Director Sadushi, professors of Magistrate School, graduates and family members,
It is truly an honor for me to be here with you all today on this special occasion, marking your graduation from the School of Magistrates. Congratulations!

Today, I’m not going to talk about U.S. policy – because you all know where we stand. We stand by Albania’s progress toward achieving historic judicial reforms that will transform this country from top to bottom. Instead, today, I’d like to address your journey.

But first – to highlight a different journey; 53 years ago, a high-level representative of the United States stood before a group of foreign students in their country and told them that, together, they could transform their country for the better.

That senior statesman was Senator Robert F. Kennedy, who in June 1966 delivered in South Africa what would later be called the “Ripple of Hope” speech, addressing thousands of students at a pivotal time in their history.

“It is from numberless diverse acts of courage and belief that human history is shaped.
Each time a man stands up for an ideal or acts to improve the lot of others or strikes out against injustice, he sends forth a tiny ripple of hope, and, crossing each other from a million different centers of energy and daring, those ripples build a current that can sweep down the mightiest wall of oppression and resistance.”

In more simple words, you can be a part of something bigger than yourself. Your small choices to do the right thing – every day – will have the collective effect of moving justice reform forward. Justice reform was no less than a quiet revolution by political consensus, and you are the guardians of that effort. Your efforts are connected to the larger future of democracy of your country. Your journey will put you in positions to build and maintain Albania’s new judicial system for the coming decades. This gives you immense power, through these ripples, to build — decision by decision, day by day — an honest and transparent judicial system free from corruption and free from criminal influence.

I urge all of you to become agents of change for a freer, a more just, and a more democratic Albania. Exercise your new power responsibly. Represent your new profession honorably. And carry out your duties ethically, with your eyes blind to corruption and wide open to injustice and inequality. Each of you, as individuals, bears responsibility to be better and do better than those before you. Each of you must make your own ripple of hopes for the good of this country. And when you do – when all of you do together – your collective ripples will become a current so powerful that they will forever transform your justice system for the benefit all Albanian people. This is your moment to be part of something great. Seize it.