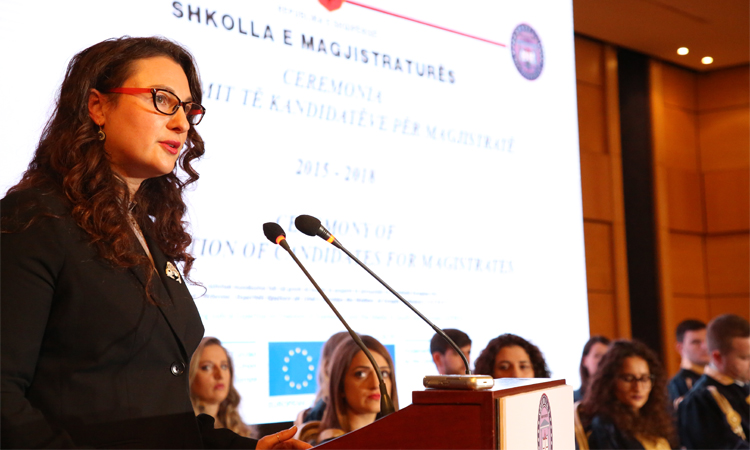 Honorable Mr. Dedja, Mr. Sadushi, Mr. Zaganjori, colleague Ambassadors, Commissioner  Jourova, dear magistrates, good morning! Thank you for having me here today. It is an honor to be with you on this special occasion to mark your graduation from the School of Magistrates. [Now I will continue in English.]

Honest. Courageous. Patriotic. These are the words the U.S. government has used to describe the ideal Albanian magistrate.  And these are the qualities I urge you to pursue as you embark on your new careers today.

This graduation ceremony marks the end of your academic journey.  But it also marks the beginning of new responsibilities for you.  Your fellow citizens are placing their trust in you.  They are trusting you to be impartial and fair.  And it is your responsibility – your duty – to honor their trust.  You have a key role in making Albania a better, more just country for all Albanians.  You can add your names to the list of those who are building a fair judicial system through the dedicated pursuit of honesty, courage, and patriotism.  You hold the promise of the future.

Many prosecutors and judges have come before you.  They, too, held the promise of the future.  They, too, bore the responsibility of the public’s trust.  Some of your predecessors have served the judicial system honorably and with distinction. But far too many have brought discredit to the system.  Far too many have eroded the public’s trust through their corruption and unethical behavior.  They failed in their mandate and they failed in their responsibility to the rule of law.

The good news for all of us is that the generation of the corrupt will soon be gone.  They will be the past.  You are the future and you hold the promise for a better tomorrow.  I urge you to be resolute in your fight for a judicial system anchored in integrity, honesty, and decency.

The United States will also continue to encourage Albania’s political leaders to do their part to create a better judicial system for everyone.  This requires members of parliament to work together.  They should work together to amend the Governance Law so that the School of Magistrates can fill these chairs with future graduates.  The promise of tomorrow’s justice system is counting on Parliament’s action today.

We will also continue to support efforts to establish the SPAK and the NBI.  These institutions will strengthen Albania’s capacity to fight organized crime and corruption.  The SPAK and NBI represent a new era in moving out of a past stained by corruption, and represent new accountability for the people of Albania.  We are very proud to support them both.

As I look at you, I feel hope for a brighter future for Albania, for Albania’s judicial system.  I see a future full of better tomorrows for Albania.

Once again congratulations. I wish your future path to be marked by honor, courage, and patriotism. Thank you very much for this opportunity.