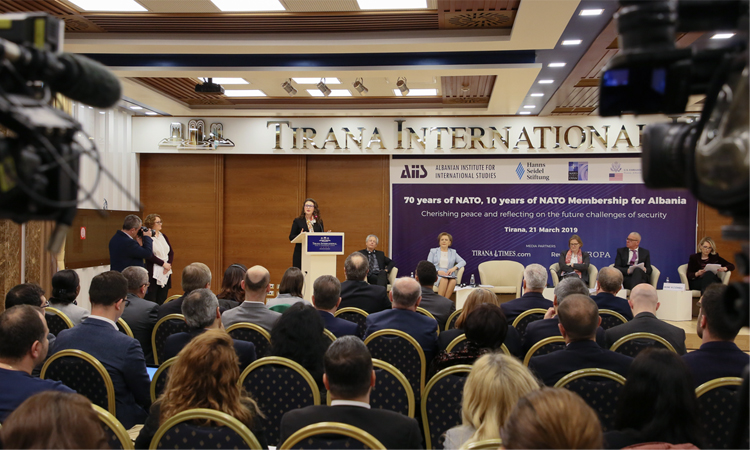 As I begin these remarks, I want to take you back to April 4, 1949, the day the United States formally tied its safety and security to that of Europe for the first time.  Before the signing ceremony, President Harry Truman stood beside Secretary of State Dean Acheson and outlined what the pact was about – “a shield against aggression that would enable governments to concentrate on achieving a fuller, happier existence for their citizens.” That remains the collective aspiration of the members of the NATO Alliance.

For 70 years, NATO has helped to create the most secure, stable, and prosperous period in its members’ history.  From deterring the Soviet Union during the Cold War to countering the hybrid threats that confront us today, NATO Allies have stood together to protect our people and defend the values we believe in.  United as one, we have formed the most successful alliance in history.  This is our legacy as NATO Allies.  This is the legacy we must continue to build going forward.

The U.S. commitment to NATO is absolute.  The members of NATO are our Allies of first resort.  We have stood together – and our soldiers have fought and died together – in operations as far from NATO’s borders as Afghanistan, where NATO has fought for more than a decade.  The United States is better able to address — politically and militarily — global threats to our shared values and interests because of the NATO alliance.  During the last 70 years, NATO’s only Article 5 action has been in support of the United States following the 9/11 attacks.

We have achieved great success over the past 70 years, but our work is not done.  Russia is determined to undermine our democratic institutions and sew divisions among us and within our nations.  Russian hybrid threats aimed at our democracies have included nerve agent attacks and malicious cyber activities.  It has invaded and occupied parts of Ukraine and Georgia, violating those countries’ sovereignty.  Russia has also been in material breach of the INF treaty, which erodes the foundation of effective arms control and Euro-Atlantic security.

Russia is one threat, but not the only threat.  North Korea and Iran, led by their rogue regimes, threaten to upset the world order through their dangerous tactics.  And terrorism remains a constant and pervasive threat to our alliance.  NATO is as important to our security today as at any time in our 70-year history.

In the face of these challenges, the United States remains committed to the principle that we, as NATO Allies, will always be stronger united as one.  NATO is a military alliance, but our collective strength comes from our shared values.  It comes from our shared commitment to the rights and responsibilities inherent to our democracies, such as the personal freedoms we enjoy and the integrity and transparency of the governments that represent us.  These are our greatest strengths.  These are the values and principles we stand for and defend.

To build on that strength, the United States remains committed to expanding NATO membership.  We must keep NATO’s doors open for new members who share our values and our promise of collective defense.  Since the end of the Cold War, NATO has added 13 new members.  The United States strongly supports NATO membership for North Macedonia as the 30th Ally.  Each new Ally has strengthened NATO’s collective defense and ability to safeguard our peace and prosperity.

For ten years, Albania has made our Alliance stronger through its commitment of troops and resources to Afghanistan, Kosovo, Bosnia, and Iraq, among several other missions.  It commits 3.9 percent of its military forces to NATO activities, representing the second-largest per capita troop contribution in the alliance.  And Albania will continue to make the alliance stronger through NATO’s $58 million investment to modernize the Kucova Air Base to boost air supply operations, logistics support, air policing, training, and exercises.  Albania’s outsized role in the alliance is an example for all Ally nations.

As Albania’s role in NATO grows, so will its responsibility to make continued progress on democratic reforms.  These reforms are fundamental to the values our alliance defends, and are central to Albania’s bid to join the European Union.  Progress must continue to improve the rule of law, root out corruption and organized crime, and create a robust economy that is free and fair for everyone.  The good news is that Albania is headed in the right direction, even if there is still work to do.  Justice reform, for example, is still on track and will soon bring Albanians the honest and transparent judicial system they deserve.  To anyone who says justice reform is compromised or failing, my message to you is this: You are wrong.

The United States remains committed to the pledge all Allies made to share the financial burden of NATO membership.  In 2014, all NATO Allies agreed to spend at least two percent of GDP on defense and to invest at least 20 percent of that spending on major equipment by 2024.  Doing so keeps our military forces strong, our equipment modern, and our alliance agile as we counter threats together.  The pledge we made is a pledge we must all keep.

And Albania is working hard to keep this pledge despite many other priorities.  In 2017, it made its first significant increase in defense spending – a first since it joined the alliance in 2009.  Now, and in the coming years, Albania must meet its agreed upon annual defense spending targets to be on track to fulfill its 2024 commitment.  The United States applauds Albania for its commitment to NATO burden-sharing and supports its continued efforts through 2024.

As NATO Allies, we must continue to invest in national defense, grow and modernize our military capabilities, and contribute to NATO’s efforts to promote the safety and security of our citizens.  We are in this together.  Working together, we will be stronger and better equipped to protect our shared peace and prosperity long into the future.