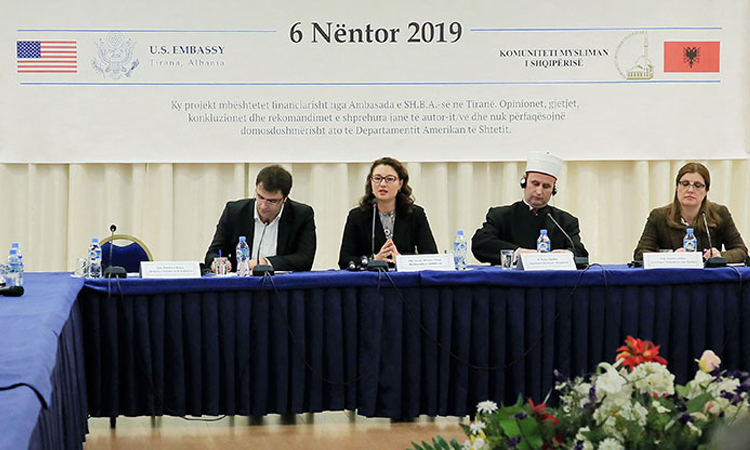 Good Morning Deputy Minister Kuko, Chairman Spahiu, religious leaders, distinguished guests.  It is my honor to be here with you today.

Allow me to begin by expressing my enthusiasm for the inauguration of the AIC’s community building program.  Together we launched this project in 2015 to thwart extremist groups and protect Albania’s democracy.  Because of the great successes the Albanian Islamic Community had in spreading its voice for peace and promoting democratic values, coexistence, and harmony to young Albanians, the AIC expanded the program a year later.  This year, the program will grow even greater.  The U.S. Embassy is proud to have been your partner in these efforts and we remain excited to be your partner in launching this year’s program.

One of Albania’s greatest national assets is its interfaith harmony – it is a shining example for the whole world to model.  This respect for religious freedom is shared by the United States and is one of the many reasons we make such effective partners.  The United States is proud of the initiative Albania has taken to position itself as a regional leader in countering violent extremism.  In 2015, Albania demonstrated bold regional leadership by hosting the first Balkan CVE summit, recognizing a new terrorist threat had emerged.  Albania was the first government in the region to open a National CVE Center and publish a National CVE Strategy.  The program whose beginning we celebrate today is a concrete example of local actors implementing that strategy to make a difference.  The Albanian Islamic Community is a trusted, peaceful voice in Albania.  When it speaks, communities listen.

As you know, nearly 300 Albanian men, women, and children traveled to Syria and Iraq to fight for ISIS between 2013 and 2015.  Some of them died fighting, some have returned, and some may return at some point.  How Albania works to reintegrate these Albanians back into the cultural and social fabric of society will be decisive in shaping the future.  This project represents an important step in that endeavor.

We are excited to inaugurate this project together, which will add to the work that the AIC has already begun to build resilient communities, develop critical thinking skills among youth, and protect democratic values.  Every person in this room today plays an important role in preventing and combating violent extremism.  Whether you are a government official, a member of law enforcement, a religious leader, a community mentor, or a representative of civil society, you are here because you understand the challenges we face.  You understand that we are in a battle of ideologies – one that pits our values of pluralism, acceptance, democracy, and harmony against an ideology of violence, intolerance, exclusion, and abuse of humanity.

At the State Department, we are focused on aligning civilian responses with law enforcement and military ones.  The implementers of this project know – we are engaged in a contest of ideas.  I know that all of you stand against violence and will help convince other people that we are the same in what we want for our families and our communities – the ideas of freedom, prosperity, peace, and harmony.  Thank you.