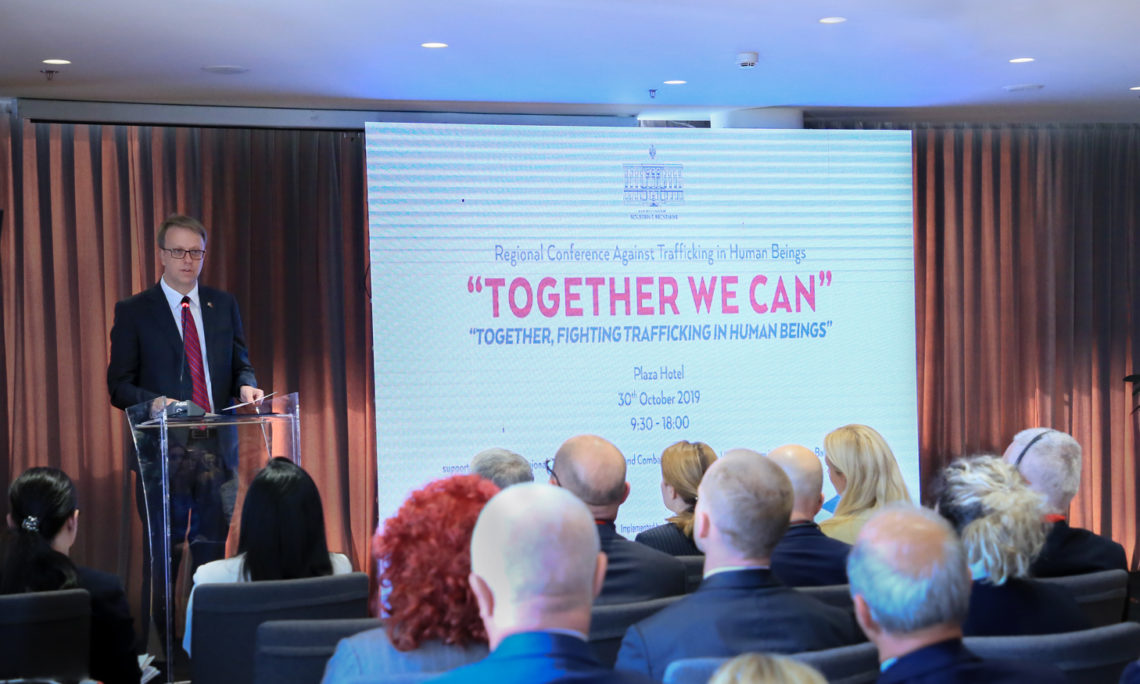 Good morning Minister Lleshaj, Minister Manastirliu, Deputy Minister Voda, colleagues, ladies and gentlemen.  I am honored to speak to all of you who are devoted to the great cause of ending human trafficking.

It goes without saying that human traffickers are clever.  They adapt.  They try to stay one step ahead of justice.  But even though we cannot always see them, we do know a lot about them.  We know how they work.  We know where they work.  And, in many cases, we know who they are.

One thing we know for sure is that traffickers are prisoners of their own actions.  The crimes they have committed have shackled them with consequences they cannot escape.  As American abolitionist, intellectual, and former slave Frederick Douglass said, “No man can put a chain around the ankle of his fellow man without at last finding the other end fastened around his own neck.”

The chain Frederick Douglass spoke of is growing longer and stronger every day in Albania.  Link by link, each of you here today is adding to that chain.

District prosecutors form one link.  The law available to them to prosecute traffickers is another.  Using the existing law, prosecutors can take traffickers out of Albanian society and put them in prison, where they belong.  Prosecutors, I urge you to investigate, prosecute, and convict more traffickers.  We will support you along the way.

To the victim coordinators, social workers, and shelter employees who make the victims whole again – each of you is yet another link in that chain.  Traffickers bring harm to their victims and to the Albanian society, but you serve to heal those wounds.  I offer the United States’ praise to the Government of Albania for funding and employing victim coordinators in prosecution offices.  This is money and effort well spent.

To help forge the next link in our chain, I urge the government to help trafficking shelters thrive.  Last year, the government did the right thing and funded shelters for trafficking victims.  This year, I call on the Albanian government to take the next logical step and create a funding mechanism that allocates adequate funding and resources for shelters on a consistent and regular basis.  The need for well-funded shelters does not end with the conclusion of the calendar year.

Police officers, civil society, and the crews that operate mobile identification units also form a part of the chain.  In 2018, the government and NGOs identified more child victims than they did in 2017.  That is a link.  Mobile victim units identified almost twice as many potential victims in 2018 than in 2017.  Yet another link.  I urge the Government of Albania to harness this momentum by securing law enforcement’s consistent participation in these effective units.

The foundry in which we forge the chain’s links is Albania’s justice reform.  Although the vetting of judges and prosecutors lies at its heart, justice reform is more than that.  It envisions a society that protects its most vulnerable members and punishes those who victimize them.  Harness the momentum of justice reform to fuel and inspire your actions to combat human trafficking.  It is a force that is unstoppable.  Use its energy.

Leaders at the highest levels of the United States government have shown a commitment to justice reform and to fighting trafficking, drawing strength from the American tradition of liberating humanity —  the same tradition celebrated by Frederick Douglass.  As Secretary of State Pompeo has stated, traffickers are on notice that we will not tolerate their despicable and criminal acts.  Together, we must be resolute.  And together we must continue to build the chain that shackles the traffickers with prosecutions and convictions, supports the victims with shelters and advocacy, and lifts up all of Albania with the promise of brighter tomorrows.

I commend all of you for your outstanding efforts and pledge the United States’ continued steadfast support to our shared goals.