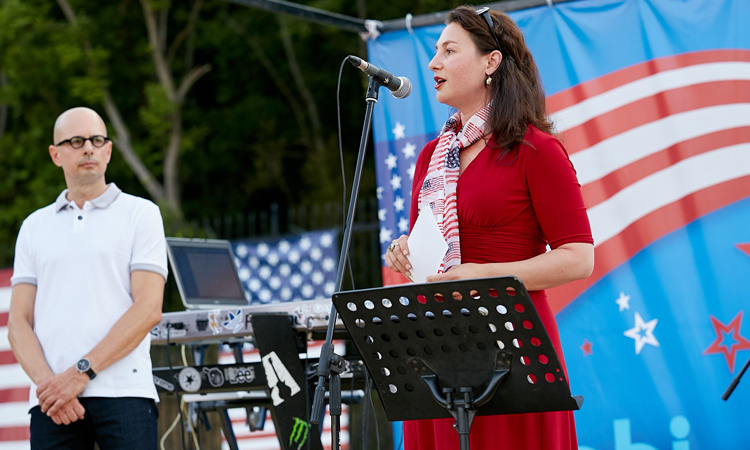 I’m honored to be here today, thank you for inviting me.  I’d like to start by welcoming AmCham’s new president of the Board of Directors, Enio Jaco, and new executive director, Ilir Trimi.  Welcome Enio and Ilir; I look forward to working with you.

Two hundred and forty-three years ago, on July 4th, 1776, the Founding Fathers of the United States of America formed the bold concept that sovereignty resided with the people, not a king.

Today, we honor their Declaration of Independence, a document whose ideas were profoundly revolutionary—including the assertion that all people are created equal and endowed with certain unalienable rights, including life, liberty, and the pursuit of happiness.  Our tradition in the United States is that government is the instrument of the people.  Our essential civic faith is that each individual among us deserves the respect and protection of the government, not because of wealth or power, or wit or skill or station, but simply because that individual is a citizen.

Thank you for being here to commemorate these ideals. And, although today we are celebrating the United States, we are also honoring the enduring relations between America and Albania.

At the Paris Peace Conference, 99 years ago, President Woodrow Wilson stood up to the victorious nations of Europe and vowed that Albania was a true nation whose borders must be preserved.  A few months later, the United States underscored its support for Albania’s independence by recognizing an official Albanian representative to Washington, DC.

Our partnership endures nearly 100 years later. And because we value this long relationship, the United States continues to invest in Albania’s development, including bilateral programs to strengthen the rule of law, help Albania become a stronger NATO ally, and deepen economic reforms.

Albania’s ongoing efforts to forge an independent judiciary are a top priority and essential to economic growth.  As judicial reform implementation continues, we can expect the creation of a new foundation for a robust economic system that is business friendly, with built-in checks against corruption.  Consistency, with fair, honest, law-abiding judges and court systems are key to inspiring more U.S. companies to invest in Albania.  And more investments will bring more jobs and the economic growth the Albanian people desire and deserve.

American companies are among the world’s most reputable for corporate responsibility, and model best practices in transparency, innovation, employee relations, and philanthropy.  Ultimately, these U.S. companies want to invest in markets in which they can compete on a level playing field, free of corruption, and know that their investments will be protected.

As Albania’s premier business organization, AmCham is well-poised to capitalize on Albania’s landmark rule of law reforms by deepening the business and trade ties between our two countries and advancing our shared vision of a prosperous Albania.

So today, as we celebrate the success of the revolutionary ideals that set the United States on a course to independence, let’s also celebrate our enduring relationship with Albania and our great U.S. Embassy partnership with AmCham.

Thank you again and Happy 4th of July!