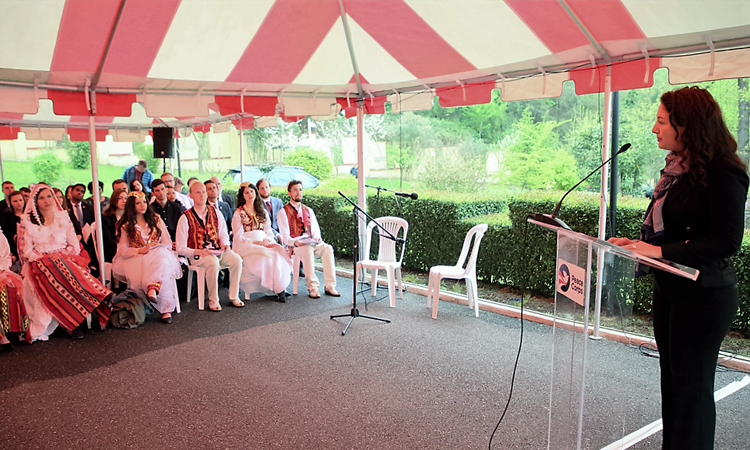 Good morning.  I would like to start by thanking the host families for welcoming Peace Corps trainees into your homes.  Soon, these trainees will take an oath in which they will promise to share American culture with an open heart and open mind, but you have already shared Albanian culture with them by opening your homes, lives, and hearts to them.  Albanians have a richly deserved reputation for hospitality – bread, salt, and heart! – and kindness.

I am going to speak in English now because I have some messages for our Peace Corps trainees.

(In English) I would like to tell you a story you may have heard already, but I want to draw something from it that is fundamental to American service in Albania.  Last year, a Peace Corps volunteer helped to start a Girl Scout troop with a significant number of Roma girls.  The program has already strengthened the character and leadership of women, both young and old, in her community.  However, as the volunteer and her counterparts collected forms from the parents of the new Girl Scouts, they discovered some of those parents could not sign their names on the forms.  They did not know how to write.

Here is my challenge to you.  Try not to see this as a setback.  See it as an opportunity.  Instead of replaying the scene in your head and sinking into a downward spiral, imagine a new version of that scene 15 or 20 years later, when the girls from that first troop have become adults.  Imagine one of them enrolling her daughter in the same Girl Scout troop.  And imagine her signing her name with no trouble.  Imagine what you need to do to get to that result and follow that vision.

Shortly after the creation of the Peace Corps, the leaders of the countries hosting the first cadre of volunteers wondered why.  Why would so many young Americans, citizens of the wealthiest, most powerful country in the history of humanity, put aside promising futures and caring families to struggle in jungles and deserts for people they had never seen before?  Why would they abandon lucrative careers in business, law, and government to worry about crop rotation, water supply, and public health?

Some thought we were crazy.  Others thought we were foolish.  And in a way, they were right.  We Americans follow our visions, no matter how crazy or foolish they may seem.  Our national aspirations are bundled into a famous phrase – the American dream – for a reason.  We are dreamers.  We are not interested in hearing that something cannot possibly be done.  We are very interested in figuring out how to do it.  That is the spirit of America.  It is the spirit of the Peace Corps.

Do not mistake my meaning, though.  You do not need to solve every one of Albania’s problems.  Development is one reason for your work, but it is not the only reason.  The establishment of a Girl Scout troop comprising mostly Roma girls achieved a great deal in the development sphere – it empowered a marginalized group, young girls, within a marginalized community, the Roma.  It spread a successful program, the Girl Scouts, to a community hungry for lessons in leadership.  And you could accurately describe the program with that most magical adjective in the spell book of international development – sustainable.

But the most powerful aspect of the program is the casual interaction between two groups who, but for the Peace Corps, would never have crossed paths:  the Girl Scouts and Albania’s Roma.  The Peace Corps at its best is an exchange of ideas, experiences, and emotions – here is what my society is like; tell me about yours – in the unlikeliest and craziest of circumstances.  That Peace Corps volunteer’s effort will leave an indelible impression on those girls years after they become women, years after that volunteer’s close-of-service conference.  Those Girls Scouts will never forget her, because she had the courage to think of something crazy and make it real.

This may be the scariest aspect of your service.  The Albanians you meet will not forget you.  Once they see you, they will not be able to un-see you, especially younger Albanians.  Albania’s newest generation is smart, talented, and impatient for change.  When they look at their society, they want something better.  For that to happen, they rely on dreamers.  They rely on people like you, people with the courage to chase their fantasies and have a go at them.  So, you will be their American.  You will matter to them.  Many of them will commit to a better Albania because of you.

One last word.  In two years, at your close-of-service conference, you will wonder where the time went.  You will worry about what to do next, once you are done with the Peace Corps.  But here is the big secret – you will never be done with the Peace Corps.  When you return home, you must explain what you did here.  Americans love to love the Peace Corps, which means your family, your friends, and total strangers will be your unsuspecting victims when you return.  Collect every moment and learn all you can about Albania and Albanians, so you can share what you did with your dream.  We need dreamers back home as well.

Thank you.  Now I have the honor to administer the oath.  Please rise and repeat after me.