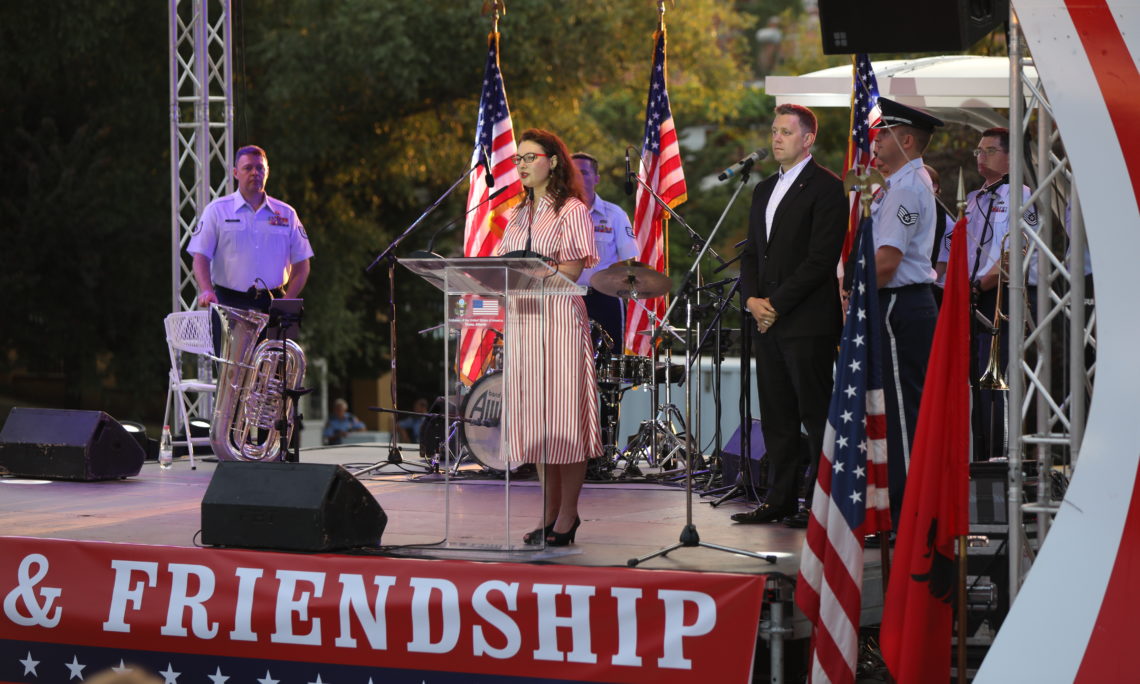 President Meta, Speaker Ruçi, Ministers and Members of the Parliament, Representatives of the Diplomatic Corps, guests:

It is an honor and a privilege for me, along with all our Embassy colleagues, to be joined this evening by our close friends and partners to celebrate 243 years of American independence and freedom.  A warm welcome to everyone!

We Americans celebrate July 4 with a carefree and joyous jubilee of feasting and fireworks.   But it is worth pausing to reflect on this radical experiment our Founding Fathers launched on July 4, 1776 at the Independence Hall in Philadelphia.  Those icons of our revolution would become the architects of a new nation with a vision for civil liberties that was nearly absolute.  It was – and still is – a breathtaking vision of human freedom and an uncompromising call for self-government – a system of government founded solely upon the people, by the people, for the people.  The Declaration of Independence, and, later our Constitution, have spurred millions of people throughout the world to begin the democratic experiment in their own countries.

The opening line of the U.S. Constitution holds that there can be a “more perfect union” – based on these ideals of equality, freedom, justice, and accountability.  At the time when monarchs ruled the world, at a time when social relationships were tied through bonds of dependency, patronage, blood, and kinship, these words were explosive and ground-breaking.  Today, these words are still exhilarating in their profoundness and their visionary quality.  We know that democracy is messy, but its founding principles, the practice of integrity, the primacy of rule of law, and defense of a free press are all elements that forge the strength and independence of institutions – institutions that serve the people.

It is fitting that tonight’s theme is Friendship and Freedom.  Because we Americans still consider ourselves the custodians of that revolutionary spirit, of that boundless hope and optimism of the American dream, of that horizon of possibility stretched out before us, expansive and open.  And, Albania, like America, also stood up for its rights 28 years ago, with many risking everything – including their lives – to both envision and work for a new beginning for your country.  Our respective national histories are continuing to unfold, and may they continue to do so in the right and noble direction.   Together we should continue to follow our western values and ideals.  We must continue to stand up for freedom from corruption, freedom to choose who we are and what we believe and what we say, freedom to forge an independent judiciary, and the freedom to study, work, and pursue happiness.  As Albania works towards these freedoms and continues to build strong democratic institutions, America will stand beside you.

Through shared values as NATO Allies, through bilateral cooperation and a commitment to peace through security, we are making the American-Albanian relationship stronger every day.

This year, we marked both the 75th anniversary of the D-Day invasion and Albania’s 10th year as a NATO Ally.  I would like to take a moment to recognize the five winners of our high school NATO essay contest entitled, “Becoming a Stronger Ally.”  They are:

These young people – the future of Albania – described the importance of the NATO Alliance in their own words.  Here is an excerpt from Endri Guri’s essay:

“I cannot include all of what NATO extracts from Albania and vice versa, but what I can include is the profound meaningfulness of such an organization in the eyes of the people who have suffered and struggled throughout history to achieve independence, peace, and stability.”

I am delighted these inspiring young writers were able to join us this evening.  Please join me in giving them a round of applause.

This has been an extraordinary year of milestones – our bilateral and multilateral military, security, and law enforcement ties are closer than ever through investments like Kucova Air Base; our academic and cultural exchanges are thriving; the justice sector reforms are moving forward with independent bodies of the HPC and HJC established and working hard to set up the SPAK, NBI, and the higher courts; we have intensified efforts to strengthen the media and build civil society, and helped nurture conditions for strong economic growth.

I want to acknowledge the incredible team at Embassy Tirana for organizing this wonderful night – they are so talented and hardworking – thank you for your efforts. I would like to thank our dedicated Marine Security Guard Detachment for the dignified and impressive Marine Color Guard ceremony.  And, of course, this party this would have been possible without our terrific sponsors – listed on the screen and also identified earlier by our MC. Thank you very much for your generosity.

There is another important theme tonight – eating and drinking!  I personally believe our menu tonight is spectacular and reflects the rich diversity of American culinary culture – from the shrimp po’boy sandwich from New Orleans, Louisiana and the cheese steak sandwich from Philadelphia, Pennsylvania…to the southwestern potato bite with guacamole and the crab cakes made famous by the state of Maryland…topped with the classic American ice cream sundae.   We also bring you Tennessee Whiskey, Massachusetts Beer, and in a symbol of our great Albanian-American friendship, wine from both our countries.

So, let’s now turn to having fun tonight, enjoying the company of good friends and great music provided to us by the United States Air Forces in Europe band, Wings of Dixie, who bring us the great American tradition of Dixieland jazz.  As the saying on Whiskey goes, Creativity is 80% Whiskey, and 20% ice — so let’s get creative!

Thank you again for coming, and I wish you all a great evening.