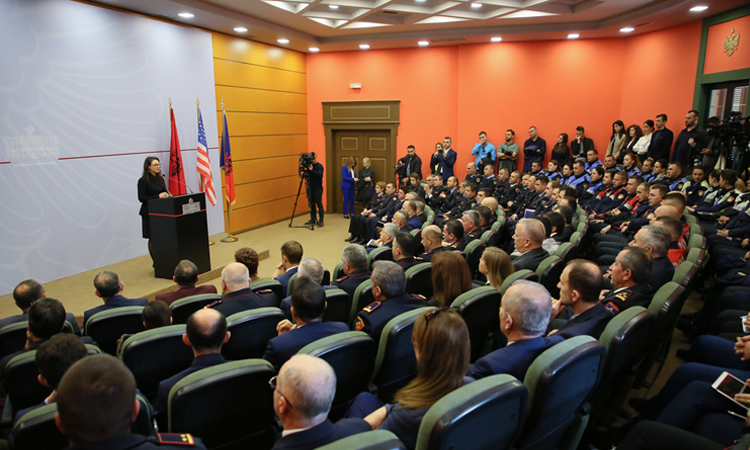 I will continue in English now.

The Police Case Management Project was started in 2004 and was fully engaged in 2014. The project team conducted an extensive analysis of Albanian Police investigative work flows, documentation standards, and laws governing how the police conduct investigations. Armed with a thorough understanding of the process, ICITAP and the Albanian State Police have designed, tested, and implemented an automated information management system to support police operations at every step.  This system was integrated with related projects fielded by our EU and Swedish colleagues.

The objectives are clear: Efficiency.  Accountability.  Data-driven performance:   This system has made the Albanian Police more efficient in their response to citizens’ calls for assistance.  It has improved accountability by enabling oversight of police performance by supervisors. It provides detailed, objective data on crime trends, police workload, officer performance, and resource allocation.

Creating the Case Management software was not the only challenge the project team overcame. United States worked with the Albanian State Police to upgrade the communications network to support the increased number of officers needing access to the Total Information Management System (TIMS) with over $10 million of computers, printers, wiring, and network equipment installed.  The technicians involved in this effort installed, tested, and configured more than 100 communication devices, some on the most remote mountaintops in Albania. Once the system was installed and connected, Albanian State Police technicians trained more than 6,100 officers throughout the country over a period of two years. These dedicated professionals spent significant time away from their homes and families, often in difficult conditions, to do the hard work needed to make this project a success.

This is but one example of how the United States continues to work hand-in-hand with Albanian and European partners to help Albania with Euro-Atlantic integration and rule-of-law.  We are seeing this in justice reform efforts.  The High Prosecutorial Council will soon bring about the prosecutors of the SPAK, and then the National Bureau of Investigation.  Our assistance to the High Judicial Council will soon lead to the Anti-corruption and organized crime court.  U.S. Department of Justice officials are mentoring Albanian prosecutors, who are already bringing about notable prosecutions — and we expect more.  The United States supports all of Albania’s new institutions, such as the Councils and the SPAK, as well as existing institutions that are willing to fight against corruption or organized crime.  Justice reform is moving forward, and it won’t be stopped.

In conclusion, I am thankful for the leadership of the Ministry of Interior and the Albanian State Police and the United States appreciates their unwavering support for the effective use of this tool.  The capacity that it will give you in the critical reform of the police and the justice system and the fight against corruption and organized crime will be pivotal to securing Albania’s future.

Thank you for this opportunity to speak today.