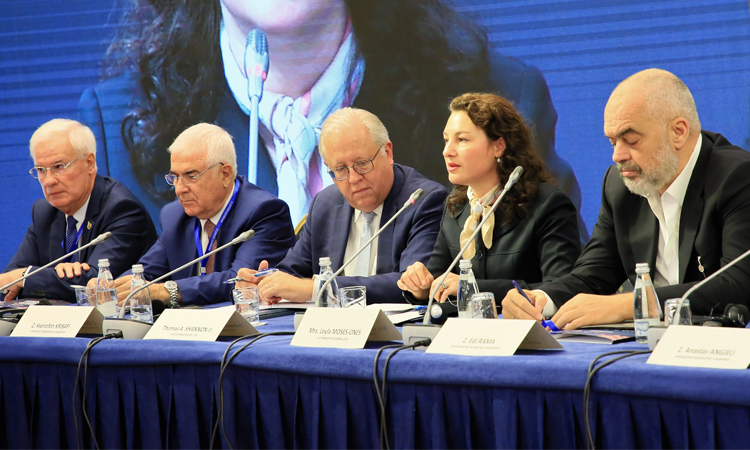 it is truly an honor to take part in this conference. I am sitting next to a giant of U.S. diplomacy and it is a big honor for me today to be sitting next to my former Under Secretary for Political Affairs Tom Shannon.

We all recognize that the post-World War II order is evolving.  As the rusting hulk of the Cold War disintegrates, a global competition for influence has taken its place.  The United States welcomes this opportunity to compete for positive influence because we are confident in the value of our offerings.

It is in the strategic interest of the United States, of course, to promote peace, prosperity, and stability in the Western Balkans.  And yes, our interest is practical, in part.  A peaceful Balkan peninsula enables the countries of the region to contribute to enhancing security elsewhere in the world.  A thriving Balkan economy provides markets for U.S. businesses.  And domestic tranquility in the Balkans allows U.S. policy makers to focus their time and resources on crises affecting other regions.

But U.S. policy in the Western Balkans envisions much more than that.  Ever since 1789, our core interests have included advocating for freedom and equality for others – as President Abraham Lincoln said, ours is a nation conceived in liberty and dedicated to the proposition that all were created equal.  The pursuit of the U.S. interest necessarily involves advocating for and acting on our ideals.  We want you to be free and equal, too.

It is true – the path we offer is hard.  It is paved with standards, expectations, hard work but it will lead to a thriving, stable Western Balkans, whose people are proud of where they come from and what they stand for.

As I survey the policy priorities of the United States for the region, I will focus on U.S. policy towards Albania, a nation with a demonstrated commitment to the transatlantic community.  What you do and the choices you make have great consequence for the Euro-Atlantic community.  Let me tell you how.

Yes, the EU’s October 18 statement on enlargement has inspired pages of mixed commentary.  Here is what matters:  Albania is a candidate country already – this has not changed. The work that is already underway and the work that must be done have not changed.  Albania will its earn place in the ranks of EU member states by redoubling efforts at implementing justice reforms, wiping out corruption, and conquering the scourge of organized crime.  This is about values; it is about rule of law; it is about prosperity and opportunity for Albanian citizens.

Not only is Albania working hard on justice reform, electoral reform is now a national project that the government, the parliamentary opposition, and opposition parties outside of office are pursuing.  Albania’s leaders have shown a willingness to compromise, for the sake of the common good.

The common good requires a common defense – of course, this is the premise of NATO.  We look forward to welcome North Macedonia soon as its 30th ally. The Alliance is also evolving, as the previous, U.S.-subsidized security of Europe transforms into a common endeavor to which we all contribute.  And Albania has delivered on its commitment.  Albania has honored the Wales Summit Pledge.  Albania contributes more troops per capita than nearly all other European nations.  And Albanians have given their lives in the service of our collective defense.

There are other nations that flaunt easier roads forward.  In the spirit of today’s conference, scrutinize their offerings before you accept them.  You will find that, for Russia, Iran, China, the Western Balkans is a means to an end, a resource from which to extract value and discard.  There is nothing idealistic about their goals. They seek to undermine the Western model of self-government that prizes liberty and choice with corrupt oligarchies divorced from the interests of the people whom government is supposed to serve.

China has deployed coercive debtor diplomacy to purchase an influence that saps the economic strength and cripples the political autonomy of its so-called partners.  The Kremlin insists on exporting nothing but chaos as it seeks to recover Soviet losses from the Cold War.  Iran has exploited its diplomatic presence in Tirana to scheme for the destruction of its political opponents, seeking to answer reasoned arguments with the cowardice of hidden detonators.

Albania has made it clear to China that some things simply are not for sale.  Albania has rejected Russian machinations.  And Albania has shown it will not tolerate Iranian terrorists on its soil.  Albania has chosen, again and again, to make principled stands.

Next year, Albania will assume the Chair in Office of the OSCE, leading an organization that also takes principled stands.  We will continue our staunch support of Albania as it deploys the inspirational values and good offices of the OSCE to address thorny issues and crises.  The United States welcomes the priorities set forth by Albania – to include combatting terrorism and violent extremism, promoting the role of women in conflict resolution, youth, and arms control – and look forward to working with Albania during its OSCE Chairmanship in 2020.

Energy security remains crucial to the success of the transatlantic community.  From hydropower to liquified natural gas, from petroleum to solar power, Albania and the rest of the Western Balkans can form the nucleus of a diversified energy strategy to fuel the Western world while reaping the benefits of their geostrategic location.

And on geostrategic location, you know the 5G revolution is coming:  the connectivity of Albania’s 4G networks will soon upgraded; the connectivity of its geostrategic position on the map is important because there are nations like China that desire to seize the digital lifeline of the Western Balkans to siphon information from, and choke the networks of, U.S. Allies.  Albania is already doing the right thing by exercising vigilance by protecting its networks.  Again, some things in Albania are simply not for sale.

The United States committed itself to Albanian sovereignty in 1912 – more than a century ago – and our commitment is adamant.  The American way is tough, but it is worth it, because we offer a partnership based on enduring values – among them freedom of speech, freedom of religion, equal opportunity, equity, individual liberty and civic participation.

It is a remarkable time for the Western Balkans.  We are fortunate to have this opportunity to help shape the future by supporting regional leaders in forming governments of the people, by the people, and for the people.

I appreciate the opportunity to speak today. Thank you Very much!