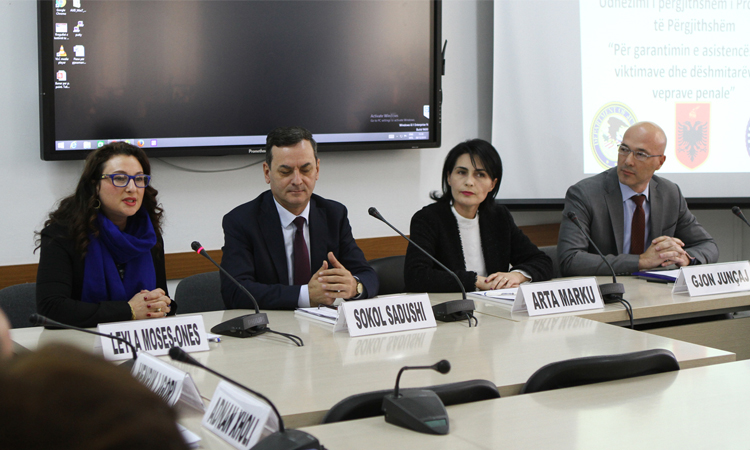 Prosecutor General Marku, students and faculty of the School of Magistrates,

In December 1999, the United Nations General Assembly adopted resolution 54/134, proclaiming November 25 as the International Day for the Elimination of Violence Against Women.  This day is the official start of 16 Days of Activism Against Gender-Based Violence, a yearly campaign where we are reminded of the deep impact gender based violence has on society.

Gender based violence affect us all; women, children, and men.  It affects us regardless of our nationality, social status, sexual orientation or religious belief.  Victims of these crimes are often the most vulnerable and silent.

It takes the efforts of everyone in the justice system to stand for the rights of victims, while also balancing the rights of the accused.

For this reason, we compliment Prosecutor General Marku for taking a step forward in protecting these vulnerable persons by issuing a General Guideline on the Assistance to Victims and Witnesses of Criminal Offenses.  These guidelines will help ensure better coordination between between prosecutors, police, courts, and the victims.  It will also help prevent repeated victimization and re-victimization of victims and also reduce the traumatic impact of their participation in the criminal process.

The guidelines will also help prosecutors promote a uniform application of the provisions of the Criminal Procedure Code related to the victims and witnesses of criminal offenses. This means a victim in Kukes or Saranda should expect to receive the same treatment of the justice system as a victim in Tirana.

These guidelines, and improved victim rights under the law, are an important step forward in Albania’s desire to meet international standards of justice for all of its citizens.  Now we must discuss and implement these improvements.  Where, better than here, with future judges and prosecutors of Albania, can we begin this important discussion?

Thank you for this opportunity to speak with you today.