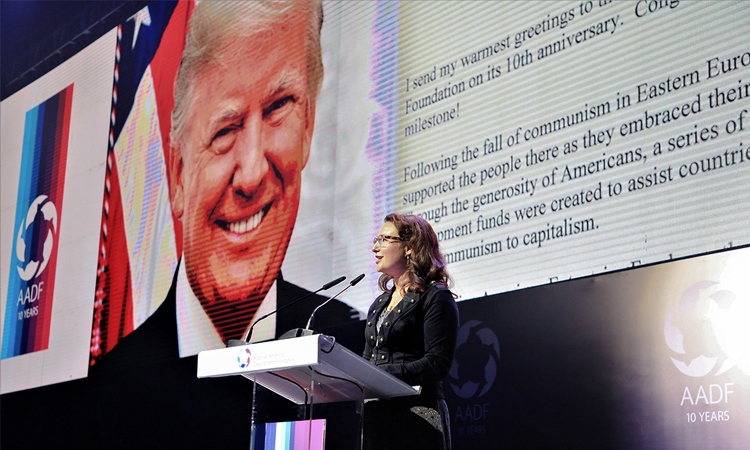 * Chairman of the Trustees Mr Granoff, Trustees of the Albanian-American Development Foundation, and Honorable Guests:

On behalf of the United States Mission to Albania and the U.S. Government, I am privileged to attend this celebration of the 10th Anniversary of the Albanian-American Development Foundation.  Happy anniversary!

Of course tonight we are applauding the great work of the Foundation; but this is also a celebration of the Foundation’s beneficiaries. Moreover, it is a celebration of the values that Albania and America share, and how these values have driven the growth of Albania’s economy and institutions:  values such as hard work and determination, service to our communities, respect for cultural heritage, and entrepreneurship.

AADF reinforces these values through running an organization that has an enduring track record of strategically advancing Albania’s private sector and democratic society, while simultaneously being both commercially successful and socially responsible.

AADF has driven change for good in the key areas of education for sustainable development, entrepreneurship, leadership development, and support for cultural tourism and eco-tourism.  This prudent, long-term approach will help Albania continue towards its goal of European integration while improving the lives and futures of Albanians of all ages.

You have heard the messages of support sent by three former United States Presidents.  President Trump was also quite moved by AADF’S accomplishments.  He has sent a letter to mark the occasion.  This evening, it is my great honor to close my remarks by reading it to you:

I send my warmest greetings to the Albanian American Development Foundation on its 10th anniversary.  Congratulations on this milestone!

Following the fall of communism in Eastern Europe, the United States supported the people there as they embraced their newfound freedoms. Through the generosity of Americans, a series of enterprise development funds were created to assist countries in their transition from communism to capitalism.

The Albanian American Enterprise Fund was the smallest fund in the poorest country in Europe.  Established in 2009, the Fund operates in perpetuity as a gift from the American people.  It is now the largest non-profit organization in Albania and has invested over $55 million to cultivate entrepreneurship, promote professional Education, and preserve Albania’s natural and cultural heritage.

On this occasion, I commend the Albanian American Development Foundation, its Board of Trustees, talented staff, and partners on your significant accomplishments.  I wish you continued success in the years to come.

* as prepared for delivery