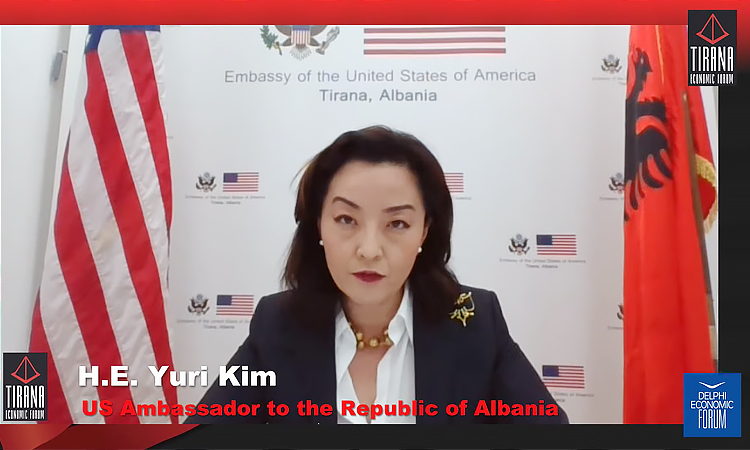 I want to begin by thanking the organizers of the Tirana Economic Forum for having me here today.  I am delighted to be joined on the panel by Thanos Dokos and my good friends Fabrizio and Peter to discuss regional stability and cooperation in the Balkans.

Let’s start with what I believe is our shared core belief: A stronger Western Balkans region means a stronger Europe and a stronger Transatlantic partnership.  A region at peace and integrated with itself and its EU neighbors will allow foreign investors to see the region as a place of stability and opportunity.  A place where greater economic integration and the free movement of goods, services, capital, and people will enable people, industries, and countries to have prosperity, stability, and greater opportunity.

The U.S. position in the Western Balkans has been and will remain centered on a region at peace with itself and its neighbors; a region that is stable, prosperous, and integrated into the European and Euro-Atlantic framework.  We believe the integration of the whole Western Balkans, all six countries, makes Europe, our partner, stronger.  The renewed commitments – most recently at the Sofia summit – to European integration, to the Central European Free Trade Agreement (CEFTA), and to the Berlin Process, combined with recent initiatives such as Green Lanes and progress on 5G security and digital standards, prove that prosperity comes of partnership.

Regional cooperation and economic integration are not just essential to post-COVID economic recovery, but to the region’s long-term competitiveness.  The United States is eager to work with all parties to ensure each country maximizes the benefits from greater integration.

To fully realize their potential, the countries of the region must make more than a public commitment to economic growth and regional cooperation.  They must take real actions to press ahead on difficult reforms, to resolve difficult political issues internally and with neighbors, to strengthen their multi-ethnic democracies and judiciaries, and to move toward a more prosperous, integrated future – a point made in the European Commission’s Economic and Investment Plan for the Western Balkans.

For Albania, it means more needs to be done domestically to strengthen Albania’s institutions and economy.  Corruption remains a major concern of the United States both in the judiciary and in politics.  The United States and European Union have worked closely with our Albanian partners to see a painful judicial reform process through.  It is beginning to bear fruit, and with clean courts we will see greater foreign investment, more jobs for the talented youth of the country, and long-awaited impartial justice for those in need of the court system.

We also believe that connecting the economies of the Western Balkans should be a priority, and that in doing so, the region will become a more attractive investment area.  Economists assess the region’s GDP could grow by seven percent if Albania and other countries in the region collectively implement reforms necessary for EU-level integration.

Greater economic integration in the region and with the EU is absolutely essential if aspirant states hope to grow their economies, counter malign influence, staunch the region’s tremendous brain drain, and create the necessary momentum for eventual EU membership.

We want to see Albania become a stronger, more capable partner, become more attractive as a destination for investment, and more willing and able to take leadership roles in the region and in Europe.

I get asked regularly about how Albania can lead and show strength.  To me, certain sectors and areas come to mind.  The first is energy.  Climate change is the challenge of our lifetime, and we are living in a corner of Europe that faces major challenges from a reliance on aging coal fired powerplants, some of the most polluting in Europe.

Albania, on the one hand, is the envy of the region with nearly 100% hydro production.  On the other, its depended on the current hydropower infrastructure leaves it vulnerable to shortages.  The United States is pleased to see Albania working with U.S. and European companies to expand production and diversify its energy sources to include solar and liquified natural gas.  We are seeing a new energy architecture emerging in the region, and the various projects under way here – from Skavica to Vlora – will position Albania to help solve energy challenges and climate change issues, not just for Albania but for the Western Balkans and for EU countries as well.

Albania has shown that it can be strong in the international forum as well.  As President Biden and Secretary Blinken have made clear, it is imperative for like-minded countries to band together to counter China’s attempts to undermine the international system – the rules, values, and relationships – that we have fought so hard to create.  Albania has been a leader in protecting its critical infrastructure from malign actors, including by pushing back on technology equipment from Huawei and ZTE.  Allowing Chinese telecommunications suppliers like Huawei or ZTE to participate in or control any part of a 5G network creates unacceptable risks to national security, critical infrastructure, privacy, and human rights.  We applaud Albania’s actions and encourage others to follow suit.

I have great hope for Albania and the region, but it is not without risk and sacrifice along the way.  With continued reforms though, especially in combating corruption and impunity, things can change, and we will see more opportunities for Albania as well as for the entire region.