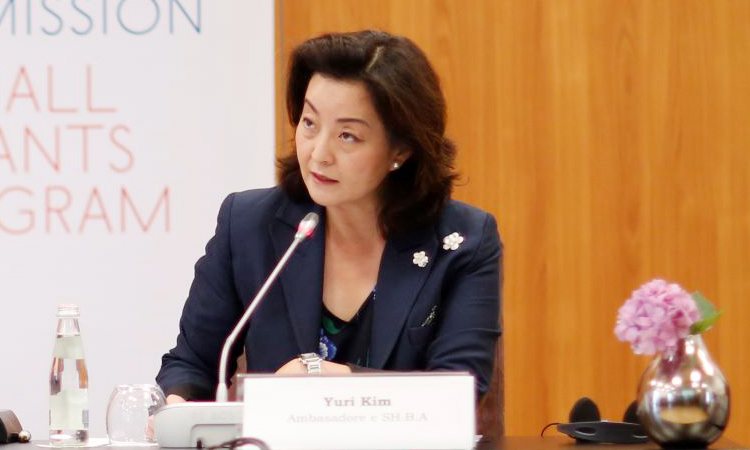 Thank you for the invitation to join you at this important event today.

Justice Reform and its implementation has been, and continues to be, one of the most important developments for Albania’s EU accession and for a more prosperous future for the Albanian people. As I’ve said many times before: justice reform is not quick, it’s not easy, nor is it perfect, but it’s moving forward, step by step.

But Justice Reform is not an effort to be tackled alone by the Albanian government. During my time here, I’ve constantly emphasized the importance of the civil society role in strengthening the democracy and moving it forward.

In this regard, the contributions of civil society in advancing Justice Reform have been substantial, including through support and advocacy, offers of technical expertise, and in monitoring the process and its progress.

This most recent initiative of the Albanian Helsinki Committee is a great example of what civil society can offer to continue Justice Reform on its path forward. For the past several months they have monitored the performance of the High Judiciary Council and the High Prosecutorial Council with the goal of improving their efficiency, accountability, and integrity. The U.S. Embassy is happy to have supported this initiative through our Democracy Commission Small Grants Program.

In just a few minutes, we will get to know the Albanian Helsinki Committee’s findings in detail, but I wanted to mention some observations that I think are important to note. The councils were the first institutions to be established by justice reform. And they were necessary to bring us to where we are today. As of this year, the justice reform institutions are established. It is important for us to recognize the work the HJC and HPC have done thus far. The Prosecutor General was appointed. SPAK has prosecutors, and the first class of NBI investigators will complete their training soon. Yes, many judges and prosecutors have been removed, but this is a good thing. Let us not forget that they were removed for having violated the standards of professional behavior. The process is moving forward. The High Court now has seven judges. All of these achievements come from the work of the Councils. However, more remains to be done to ensure they reach full efficiency.

First, the HJC must meet its obligation to deliver an effective SPAK Court by promoting vetted judges as soon as possible. There is no doubt that the staffing gaps caused by the vetting system have been alarming. However, the HJC has the opportunity to get this process back on track by moving vetted judges into positions where the work can pick back up and cases can be processed.

Second, both the HJC and the HPC must find solutions to existing gaps in resources. The public cannot wait for justice until the completion of vetting. The councils must act now to evaluate the needs of the system through the judicial map and by holding magistrates accountable for their actions through ethical and professional evaluations.

Third, the councils must establish the standards in order to hold magistrates accountable and adopt a code of ethics for judges, prosecutors, and themselves.

And finally, the Councils must lead by example and follow their own rules by respecting the procedures and timelines established by law.

While the Albanian Helsinki Committee also had additional recommendations, I wanted to highlight these four to help us build the roadmap to the future. Both the HJC and HPC have more work to do. They play a critical role in setting up Albania’s justice system for future success.

I hope that the guidance and recommendations that are being discussed today will assist both the HJC and HPC in fulfilling their important roles. And in that regard, I want to reiterate the unwavering support of the United States to help move justice reform forward. We are together with you in this journey.