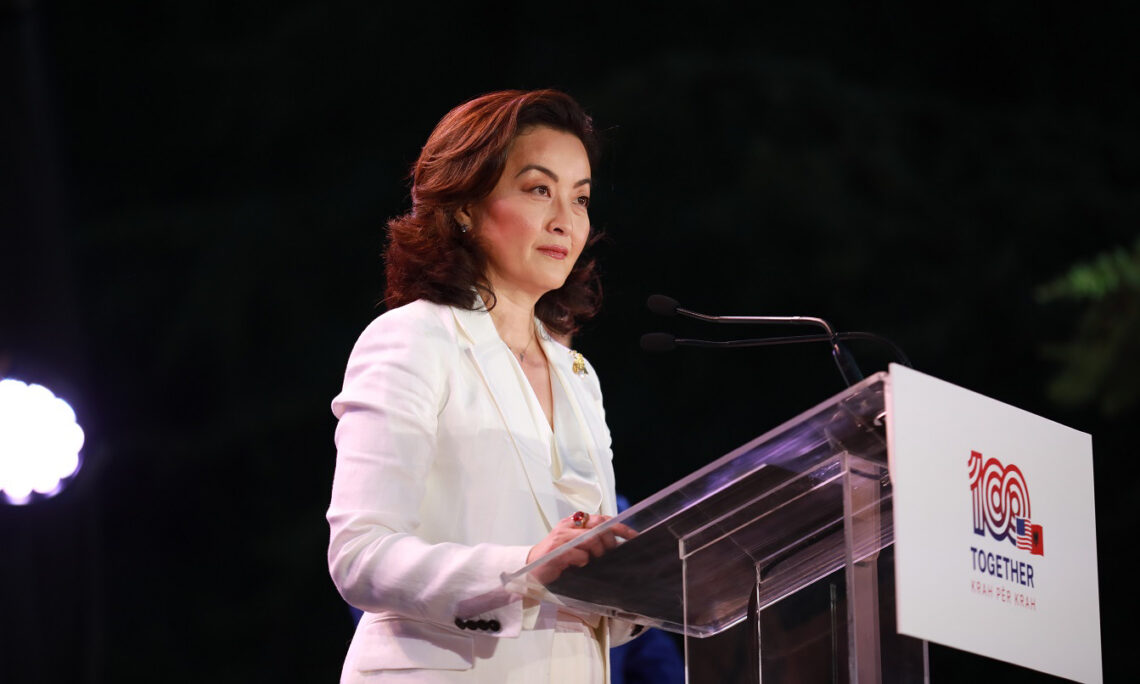 Mr. President, thank you very much for your kind remarks on behalf of the Albanian people.

Madame Speaker, excellencies, and honored guests, friends – it is my very special privilege to welcome you to this historic gathering to celebrate the 246th Independence Day of the United States, and 100 years of friendship between the U.S. and Albania.

Our 100-year anniversary and our 246th birthday is a moment for celebration, there is so much that we have accomplished together. It is also reflection and recommitment to each other and to our aspirations as democracies.

The United States and Albania share many things, but one of the things that we share in common is hope. Hope in our struggle for independence and sovereignty, and our relentless drive to build a democracy. Americans and Albanians have both endured the yoke of oppression – as colonial or imperial subjects, and for Albanians, again, as victims of dictatorship. And we have both have demanded and won freedom.

There are no words that more famously or aptly describe who we are and who we wish to be as a nation. Our Constitution begins with the acknowledgement that power originates from “We the People,” and it is “We the People” who announce our intention “to form a more perfect union.”

To me, it is a perfect expression of democratic ambition: Americans are not subjects of a monarch or dictator, we are not awaiting commands; we are not mere spectators to events unfolding before our passive eyes. We the people, the American people, insisted from our first moments as a nation that we should live in the active voice, taking responsibility for ourselves and demanding accountability from the leaders we elect.

Democracy is not a gift that that is bestowed out of magnanimity or received with humility. It is a living prize that “We the People” won in that hard-fought battle for independence – whether in the United States in 1776 or Albania in 1912. And “We the People,” Americans and Albanians alike, remain charged with the duty to cherish, protect, defend, and strengthen our democracy not only for ourselves but for those who come after us. It demands that we live history, we make history in the active voice.

As we reflect on the 100th anniversary of U.S.-Albanian relations and the 30th anniversary of the end of communism, let us remind each other of the solemn role and responsibility all of us here have to cherish, protect, defend, strengthen, share democracy – the democracy for which all our peoples – Americans and Albanians – have fought so hard.

And in ending my remarks, let me pass the baton so to speak, to those who really do live history in the active voice, representing the future of U.S.-Albania relations. Let me invite here Tea Aliaj, who leads the U.S. Embassy’s Outdoor Ambassadors Club, and Artens Lazaj, the president of U.S. Embassy Youth Council to make a few remarks.

Thank you Tea and Artens, for those inspiring words!

And now, Mr. President, and guests, please join me in raising a glass to the 246th birthday of the United States of America, to 100 years of the enduring American-Albanian friendship, and – most importantly – to the future! Gëzuar! Edhe një qind!