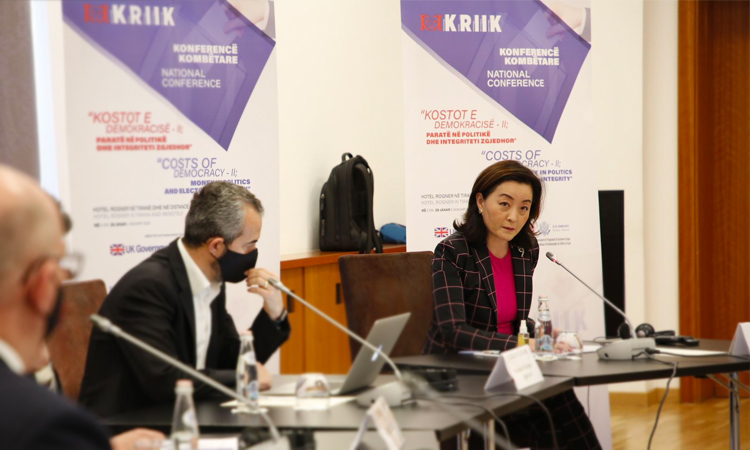 I am pleased to be part of this conference today, concluding an important initiative, the goal of which is to make Albania’s election processes freer and fairer. Democracy rests on a foundation of transparency and public trust, which is why this focus on party and election campaign financing is so important. As Albania looks to join the European Union, it must ensure elections are free and fair, with candidates of integrity who can honorably represent the interests of the Albanian people.

I’m proud that the United States supported this initiative, and we will continue to support other efforts that improve the integrity of Albania’s elections. The Albanian people deserve to have trust in their institutions, they deserve to cast their votes in a transparent process, free from criminal pressure and the specter of corruption, and they deserve to see the leadership of the political parties, and their representatives in parliament, serving the interests of all Albanians.

But the responsibility to improve Albania’s electoral system does not fall on just one person, one institution, or one political party. In fact — EVERYONE must take up this effort. Each of you attending this event and the people and organizations you represent. Everyone has an important role to play in forging the democracy you want and deserve.

Now, we are following the implementation process closely. We are tracking the work of the institutions responsible for election administration to ensure the upcoming parliamentary elections of April 25 are free, fair, and transparent. We are also working with the political parties, encouraging them to fulfill their legal obligations and to work to build the trust of the Albanian people by putting forth candidate lists that do not insult voters, undermine democracy, or promote corruption. Party leaders must remove any corrupt or criminally linked politicians from their ranks and not put them on the ballots in the first place. Full implementation of decriminalization is essential to Albania’s Euro-Atlantic future.

But who appears on a ballot is only part of the solution. Political parties need to take seriously their obligation to ensure transparent party finances. We call on all political parties to make their party and campaign finances transparent, as well as make public the asset declarations of all candidates. Just as we have worked with the justice system to check the integrity of judges, so are we urging checks – thorough checks – on candidates for office. The Albanian people deserve it.

Albanian voters must take responsibility as well — the responsibility not to accept money for their vote and not to vote for criminals. In a democracy, citizens are ultimately responsible for the politicians they elect.

Civil society has a vital role to play in many aspects of the election process, including holding institutions and political parties accountable for election administration and raising awareness among citizens on the importance of their participation in the elections.

Members of civil society also contribute through their studies and recommendations – like those that we will hear today – to ensure that Albania holds elections in accordance with internationally recognized democratic standards.

The United States is proud to have supported this initiative of KRIIK Albania. By identifying the shortcomings of the legal framework and making recommendations for its improvement, Albania can build a better electoral system.

Although these recommendations are mainly aimed at the new law on party financing, we encourage all political parties and all actors involved in the electoral process, to reaffirm their commitment to a transparent system, including the party financing in the upcoming elections of April 25.