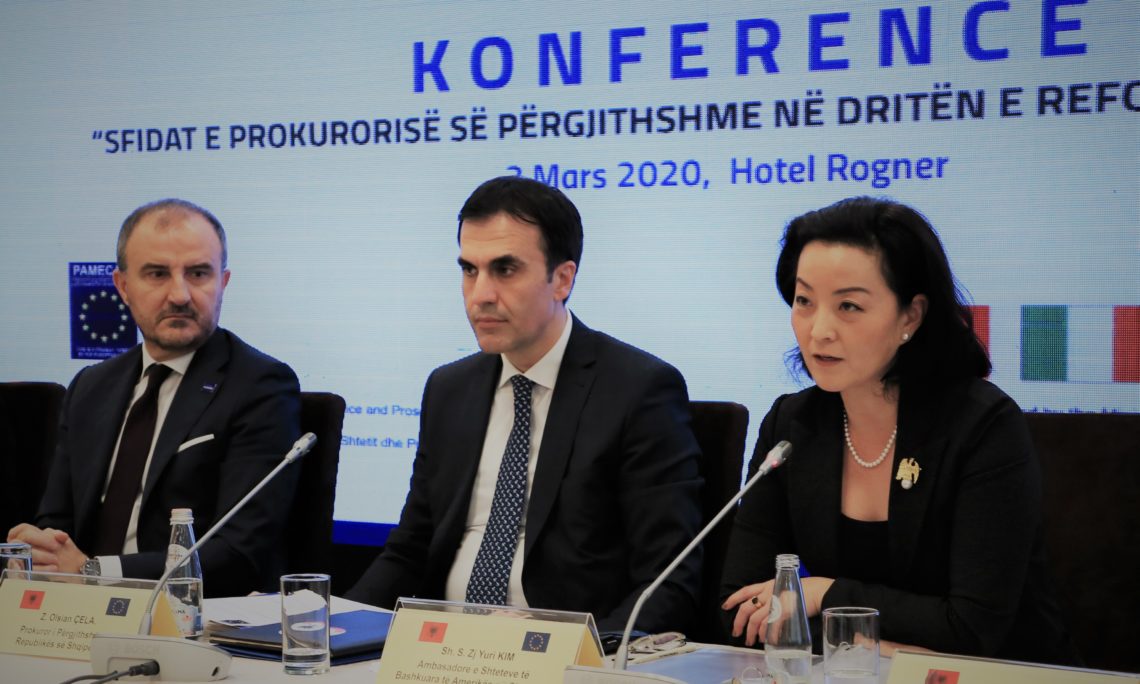 Faleminderit shumë! It’s a great pleasure to be here today! Thank you Mr. Çela for inviting us all to join you for this event. I appreciated your comments very much!

And Luigi, thank you also for your comments! Once again, I find myself in agreement. And I have to say, first of all, Luigi is correct. 2020 is a big, big year for Albania’s path toward joining the European family fully. And we’re excited and we’re honored to be standing at the side of our great friend and ally Albania, as you make the changes that are necessary. All of us I think understand that the reforms that are being undertaken are extremely important, but they are also extremely difficult. And at the time like these, it is necessary for friends to be more present than ever. So, we’re happy to be here.

Justice reform brought significant changes to Albania’s prosecution system and now is the time for prosecutors to regain public trust.  It is an opportunity for those committed to the concept of justice and public service to ensure the sustainability and success of these reforms.

The past few months have demonstrated there are many individuals, heroes, who are willing to answer the call of duty to join the ranks of the justice system to serve the greater good.  Among them are those who took the oath to join the Special Prosecution Office, as well as those who applied to be the Director of the new National Bureau of Investigation.  We are grateful for your dedication and the courage that it took to get you to take on this difficult task.

The establishment of the Special Prosecution Office and the NBI is a critical step – very important step – toward a functional SPAK that will take a proactive approach to the investigation and prosecution of organized crime and corruption.  As a member of NATO and an aspirant for the EU, Albania must uphold the rule of law.  This is not a choice; it is a requirement. And we are pleased to stand by Albania’s side as you take on this requirement. It must end corruption and impunity. These are two of the impediments that are preventing Albania from being as great as it can be, from being the investment magnet that it should be.

We welcome Prosecutor Çela’s expressed commitment to promote strategic thinking to combat crime and to improve the efficiency and capacity of the prosecution system.  In 2019, the Prosecutor General’s Office hired 21 victim assistance coordinators.  In February, the High Prosecutorial Council accepted 10 new prosecutors who each swore an oath to uphold the constitution.

The fact that so many individuals have come forward to be part of the new prosecution system is proof of the promise of justice reform. Their commitment to public service will be the force that brings change to Albania.

I thank each and every one of you who has answered that call on behalf of your country and mine.

I also want to recognize the importance of coordination.  Today’s conference acknowledges that coordination is essential to the successful implementation of justice reform.  The head of each institution speaking this morning may represent an independent institution – independent, yes, but NOT isolated.  I urge you to continue to communicate with each other to strengthen and maximize your ability to deliver justice.

The United States will continue to assist you in this task, and other critical functions, during the coming year.  Specifically, our OPDAT team is committed to supporting the prosecution system with a group of trainers from New Jersey committed to assisting Albania over the next 12 months.  We will work with you to strengthen the skills of vetted prosecutors to tackle and deter criminal activity.  We are committed to facilitating the development of the newly recruited Victim Assistance Coordinators to ensure the protection of the human rights of crime victims.

As you move forward in implementing judicial reform initiatives, I want to share a quote that captures the way in which prosecutors can serve the public.  The quote is from United States Supreme Court Justice George Sutherland who wrote the following about prosecutors:

“[The prosecutor is] in a peculiar and very definite sense, is the servant of the law, the twofold aim of which is that guilt shall not escape, and innocence shall not suffer.  He may prosecute with earnestness and vigor–indeed he should do so.  But while he may strike hard blows, he is not at liberty to strike foul ones.  It is as much his duty to refrain from improper methods calculated to produce wrongful conviction as it is to use every legitimate means to bring about just ones.”

I ask that, together with the partners here today, your efforts reflect the principles espoused by Justice Sutherland in the noble pursuit of a prosecution system dedicated to meeting the needs of the people that you serve.  Use the fair tools of justice reform! Take them in your hand and use their full power to do the good that you have signed on to do! Do not let the guilty escape.  Do not let the innocent suffer.  Serve your duty with honor, and the United States will stand firmly at your side.