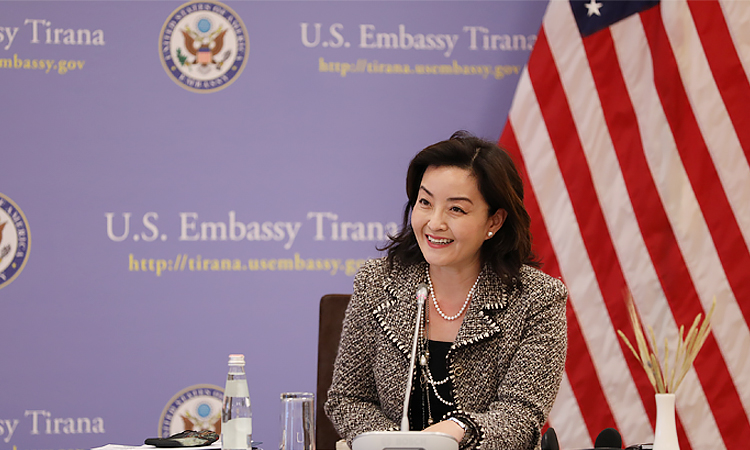 I am proud to be here today as the U.S. Ambassador to Albania, celebrating together with our Albanian colleagues, this historic occasion: the 30th anniversary of the reestablishment of U.S.-Albanian diplomatic relations.

Anniversaries like this are an opportunity to think about how far we’ve come, express appreciation to all Albanians for the strong friendship and cooperation between our two countries, think about where we need to go next, and recommit ourselves to working together as the closest of friends and Allies.

Thirty years ago, on March 15, 1991, the United States and Albania resumed full diplomatic relations after 52 years of non-recognition. And that agreement was just the first of many important events that occurred here in 1991.

I would like to take a few minutes today to remember what a remarkable year 1991 was for Albania. George H.W. Bush was President of the United States. James Baker was the Secretary of State. The two invited Foreign Minister Muhamet Kapllani to Washington to take part in the signing ceremony to reestablish diplomatic relations. On March 15th, diplomatic relations were formally restored. That moment ignited a burst of activity that laid the foundations for a new Albania and a new partnership between the United States and Albania.

On March 31st, exactly 30 years ago today, Albania held the country’s first multi-party election since the communist takeover in 1944. It was a time of change and turmoil in the country, a time for the Albanian people to decide who their leaders should be.

A few months later, on June 22, Secretary of State James Baker visited Tirana. Around 300,000 Albanians squeezed into Skanderbeg Square to hear Secretary Baker tell them that “freedom works” and to urge them to move forward toward democracy. I’m happy that Dr. Elez Biberaj, who translated Secretary Baker’s speech, is with us today.

On October 1st, the U.S. Embassy in Tirana reopened its doors with Christopher Hill as Chargé d’Affaires ad interim and who was later succeeded by U.S. Ambassador William Edwin Ryerson, who presented his credentials to the Government of Albania on December 21st, 1991.

1991 was truly a new beginning, not only for a fresh start to our bilateral relations, but also for Albania’s development as a democratic country and international partner.

During the past thirty years, U.S.-Albanian relations have prospered and grown.

The United States has been a strong partner, Ally, and friend to Albania as it strengthens its democracy, opens up its economy, and provides opportunity for all its people. The United States supports Albania’s European Union membership goal, as it did Albania’s pursuit of NATO membership.

As a valued NATO Ally, Albania has demonstrated constancy and commitment to our security partnership – anywhere in the world. We are proud to stand as NATO Allies with Albania.

The United States is a staunch supporter in Albania’s efforts to implement justice reform, strengthen rule of law and governance, and create conditions for inclusive economic growth. The United States remains committed to a democratic, secure, and prosperous future for Albania, as a full member of the European Union for the benefit of its citizens and the entire region.

We’ve come a long way in 30 years, and we look forward to many more decades of being krah për krah!