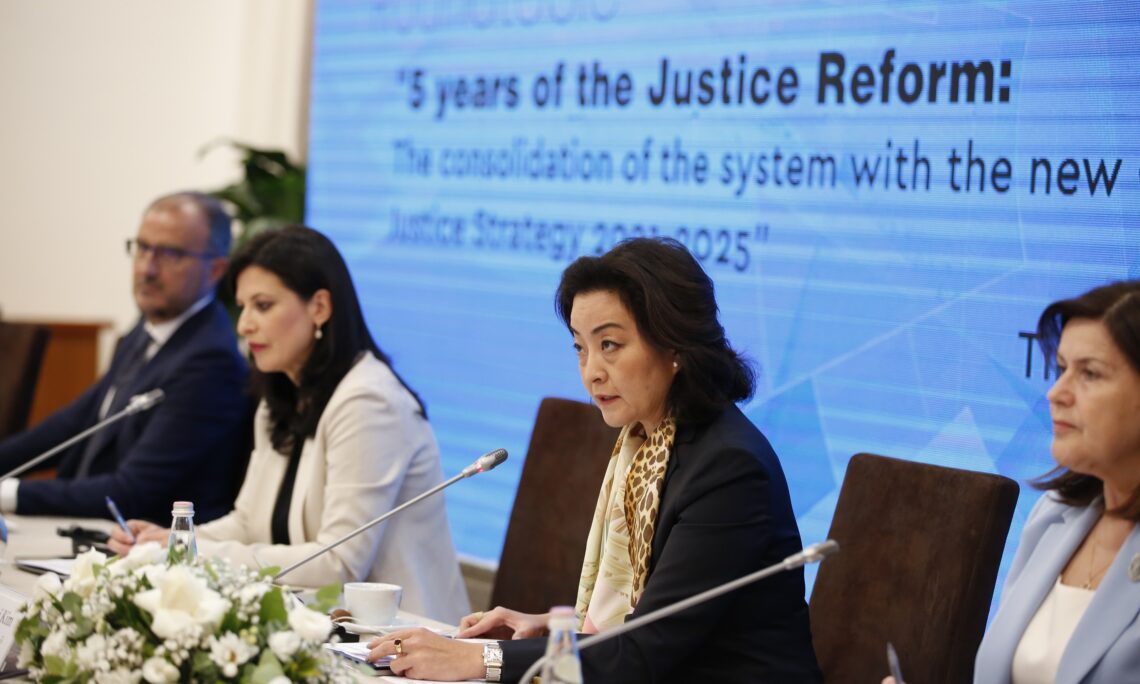 Thank you Minister Gjonaj, Ambassador Soreca, distinguished colleagues, it is great to see all of you! It is a very important moment that we come together.

Five years ago, Albania enacted the constitutional and legal amendments which established the framework for comprehensive justice reform. Polling at the time showed that 93% of Albanian citizens supported justice reform, they demanded justice reform, which demonstrates just how much normal Albanians, average Albanians, want real, fundamental change in the justice system in Albania.

As I often like to say, justice reform has not been easy, quick or perfect, but we are now seeing results. Albania has made tremendous progress toward the justice reform that its citizens demand and we are seeing the results of all those efforts. All the institutions established by the passage of Justice Reform in 2016, are now fully functional. Some are not fully populated, but are fully functional, including the High Court, the Constitutional Court, High Judicial Council and High Prosecutorial Council. As we’ve all seen from the headlines, SPAK and NBI are also established, they are functioning and they are delivering results. Vigorous vetting of judges and prosecutors has weeded out numerous corrupt officials.

With the justice institutions now in place, they are showing that they can act, and they can deliver results on behalf of the Albanian people. They are showing that the law applies equally to everyone, big and small. No one, no one, no matter how powerful you may think you are in this moment, no one is above the law and it is up to Albania’s justice institutions, it is up to you to demonstrate through your actions that this is true and will be true.

It is the hope of Albania and Albanian people, and it is the hope of everyone around this table to ensure that we get it right and that we break the cycle of impunity and generate hope for the next generation.

As I said, we are beginning to see results — from the removal of corrupt judges to the convictions of top prosecutors, to the arrests of politicians, police, and organized criminals that have made the headlines over the last weeks. Many said it couldn’t be done. Many in fact didn’t want it to be done. But it is happening. Many will continue to hope and many will continue to act, to prevent it from going on. It is the job of everyone at this table but primarily the job of Albanians at this table, not foreigners, Albanians at this table, to reaffirm and reconfirm your duty and to execute your duty as your people trust you to do. Now it is the time for you to firmly open a new era in Albania, to create a system where the average person has hope that they will have a fair shot in life, that their concerns, that their demand for justice is given as much consideration as the demands, fair or not, of the powerful. It is a start, you’ve made a good start, you’ve made good progress. Much more needs to be done.

It is a critical moment. The United States encourages you and are with you. We want to see you continue the good work, to overcome the obstacles that remain in your path. We have supported justice reform strongly from the beginning in 2016, and we’ll be with you through the end. I want to point out that U.S. support for justice reform began through the Obama administration, it continued under the Trump administration, and I can assure you that under the Biden administration this support will only strengthen, we will be with you until the end.

As we mark five years since the passage of the laws, it is a good time to celebrate because there is much to celebrate. Much has been accomplished. It is also a good time to look around and assess where we are, where we go, what we’ve done right, what can be improved.  It’s time to have a hard, objective and effective look at the progress that has been made and be realistic, adjust accordingly, and continuously improve so that you can succeed on behalf of the people.

Today it is a good time to begin a discussion about the next five years. For real, meaningful change, it is up to you, the stakeholders in the justice system, and the Albanian people, to embrace change, to believe in change, to embrace reform, to make the system work for everybody, and to show to those that have taken advantage of a broken system, that their days are over. That they may no longer steal from the Albanian people, that they may no longer impose their injustice on everybody else. It is time to show that justice will prevail in Albania.