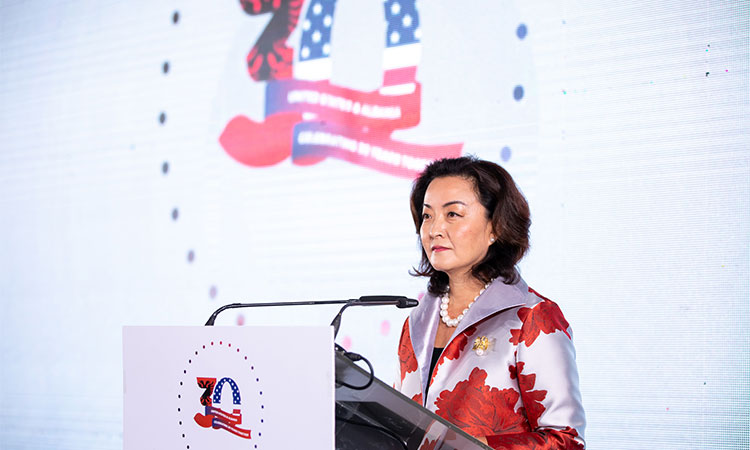 Speaker Nikolla, Minister Xhacka, Ministers, fellow Ambassadors, and all of our distinguished guests, young and old, what a wonderful evening this is and what a great pleasure it is to be together!

It is an honor to welcome you on this very special occasion, as we commemorate 30 years of renewed diplomatic relations between the United States and the Republic of Albania.

30 years ago, in 1991, Chris Hill, a good friend and a mentor of mine, arrived in Tirana as Charge d’Affaires to open the U.S. Embassy – 52 years after it had been shut down!

He landed in a country that had been ravaged by almost 50 years of communist dictatorship. He came with two suitcases of food and a mattress. It may not have been the most glamorous start, but it was an important start, it was a long, denied embrace between the people of Albania and the people of America. The birth of hope and the beginning of change in Albania.

I’ve had the privilege to know Chris for a very long time now and he’s told me many stories about his distinguished diplomatic career, but what he’s always told me is that one of his proudest moments as a diplomat, as an American, as a human, was the moment that he was able to stand with Andromaqi Adami, as she raised the U.S. flag in 1991, to mark the return of the United States in Albania.

I remember the first time I asked him about Albania and his role in the return of the United States’ Embassy here and I said, “it must have been wonderful to have been able to raise the American flag.”

“No,” he told me, “I was there, I witnessed it, but the person who actually raised the flag was Mrs. Adami. She was the person who pulled the rope to raise the flag.”

And I asked him why that was the case and he told me that he had asked Mrs. Adami to join him in raising the American flag that day, in honor of her husband Loni Adami and his colleague, Kole Kuqali, who were killed by the communist regime for nothing more than being associated with the U.S. Embassy.

In the three decades since that moment, we’ve been proud, as Americans, to stand with the Albanian people as you have cast off the shackles of dictatorship and communism, to build a free, democratic nation. And we could not be prouder of the unshakable partnership that all of you, and so many others, have built together. We’ve built them together among Presidents, among Foreign Ministers, parliamentarians, civil society advocates, everybody, including, most importantly, our Albanian colleagues at the Embassy.

And I would just like to take a moment to recognize Kastriot Stafa, who has been our longest serving, currently employed, employee at the Embassy. He’s been with us for 29 years. 29 years! He has been the backbone, along with so many colleagues like him, of the relationship, through good times and bad. Kastriot is here with us!

The imagination of people in 1991 may have failed, but where that failed the hard work, the determination, the undying hope of everyone here prevailed and made it possible.

We have built on the foundations of those who came before us, those who had the duties with which we are currently entrusted. And we are grateful to leaders from across the political spectrum, journalists, public servants, members of civil society, members of the military and law enforcement, and so many others, that helped to build the relationship between the United States and Albania, who have led Albania’s march in pursuit of democracy and liberty.

And as we reflect with gratitude on the contributions of those who came before us, we do so always with our eyes on the future. The future! The future is what counts most! And so tonight, I am very pleased to be able to recognize the young leaders who are here with us, including members of our Embassy Youth Council. And our special guest who made an appearance on stage, who is the great-grandson of Mrs. Adami! Did I get that right? All of us are counting on this next generation to build the U.S. – Albania relationship for the next 30 years and beyond.

And seeing the poise of our Youth Council members and the energy of our youngest guest, I have every confidence that the future is in good hands.

And while the rest of us are still here, I hope all of us will do our part to be worthy of the legacy of those who came before us, those who sacrificed so much to renew diplomatic relations and to lay the groundwork for a strong, vibrant relationship between the United States and Albania.

And with that legacy in mind, I am so pleased tonight that, as of today, the official residence of the American Ambassador to Albania will henceforth be known as the Ryerson House, in honor of Ambassador William Ryerson, whose unwavering commitment to nurturing democracy in Albania, his true, deep affection for the people of this country, and his determination to build U.S.-Albanian relations has been a model for every American diplomat since 1991.

And while Ambassador Ryerson was not able to travel here to be with us, I can assure that we, in the country of Albania, are there with him in Washington. To this day, I don’t know if you know this, but to this day, if you visit him at his home, he has the American flag and the Albanian flag flying side by side. And he is rightfully revered as a pivotal figure who laid the foundations for renewed relationships between the American people and the Albanian people, and who set Albania, our ally, our friend, on a decidedly pro-American, European future.

So, let us reflect on the past, let us always think of the future, and let us commit ourselves again to the task of making this friendship, this partnership, this alliance, the strongest, the best and the greatest that has ever existed.

And let’s keep moving forward together, to the future, krah për krah.