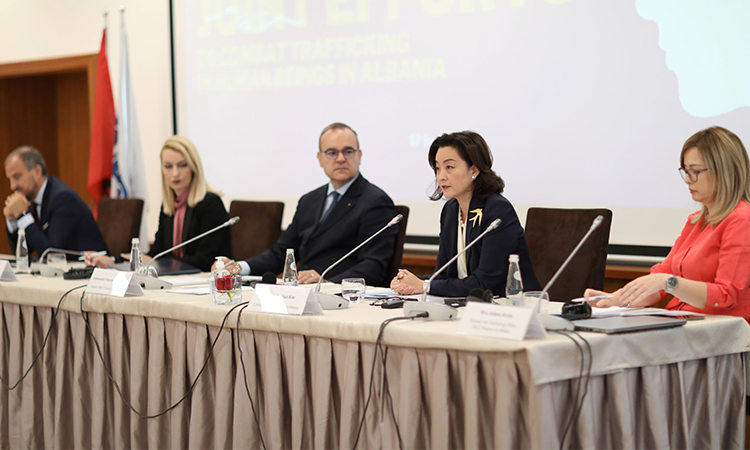 It is a pleasure to be here. As you know, President Biden and Secretary Blinken have made clear that corruption, human rights abuses, and other destabilizing crimes constitute threats to U.S. national security.

They have directed all U.S. Government agencies to defend the United States and its allies against the damage that serious crimes and human rights abuses, such as human trafficking, inflict on our national security.

In that vein, we want to underline the importance of fighting against human rights abuses in Albania. Albania’s preparations for EU accession negotiations and membership demand nothing less.

President Biden’s recent Executive Order concerning the Western Balkans elevates the protection of human rights – and therefore the fight against human trafficking – to a national priority for the United States. We intend to hold accountable those who are responsible for or complicit in serious human rights abuses in the Western Balkans. It means that traffickers represent, to quote the language of the order, “an unusual and extraordinary threat to the national security and foreign policy of the United States.”

If you traffic in human beings, we can prevent you from entering the United States by suspending your U.S. travel documents.

If you have a U.S. visa, it will no longer do you any good.

If you have a petition for an immigrant visa, too bad.

If you traffic in human beings, the U.S. government can take action against your property if it comes through or has a connection with the United States.

Note that President Biden’s executive order requires collective action, which is the topic of today’s forum.

We will implement the order by coordinating our actions – internally and externally – j to achieve our common goal.

Albania is at a turning point – it has been a member of NATO since 2009, completed a successful turn as Chair-in-Office of the OSCE in 2020, just won a seat on the UN Security Council for 2022-2023, and is on the verge of formally opening negotiations for EU membership.

This is the moment for Albania – government, civil society, media, others – to show leadership on the global effort to end human trafficking.

With civil society, including the NGOs that run three of Albania’s shelters for trafficking victims, the Interior Ministry, the Justice Ministry, and justice institutions can revive efforts complicated by COVID-19 to identify more victims, prosecute and convict traffickers, and prepare those who were trafficked to reenter society.

Thanks to justice reform, you know that you have the institutions and the professionals to put traffickers behind bars and care for victims.

We urge the Government of Albania to renew its efforts to identify victims, make them whole, and send traffickers to prison.

Let’s work together in partnership – as the concept note for this event says – to fight human trafficking.