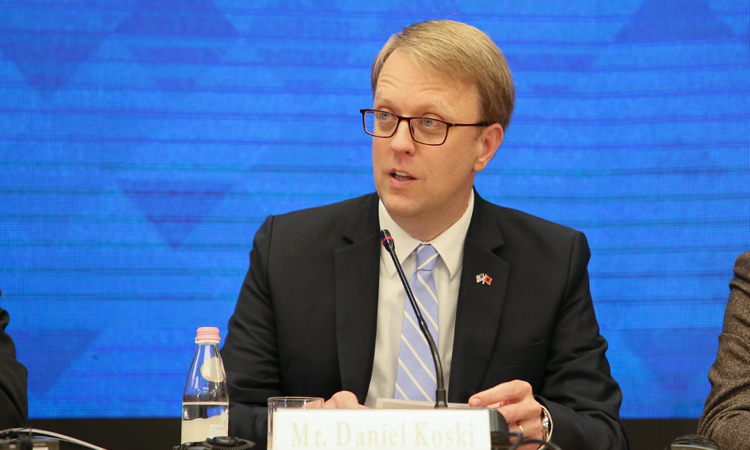 It’s an honor to be here tonight.  I’d like to start by bidding farewell to Mark Crawford, the Chamber’s outgoing chairman, and Enida Bezhani, AmCham’s former executive director.  On behalf of the United States Embassy, allow me to extend my appreciation for your support and service to the Chamber.  Thank you both.

As many of you know, the Embassy has collaborated with the AmCham Board of Directors over the past year to encourage a path of reform.  Because of those efforts we now have a smaller Board of Directors that can make decisions more quickly and take risks, we have limits on the number of mandates for board members and their companies to encourage new ideas and new energy, and we have new general membership categories that will encourage more U.S. companies and American citizens to join the Chamber.

Thank you to everyone who voted to support these necessary reforms!

The Chamber is headed in the right direction.  Yet, there is still more work to do to improve Albania’s investment climate.

Each year, Albania loses millions of dollars in potential foreign direct investment, largely because of negative perceptions of its business climate.  But there is good news on the horizon.

To all potential investors – both U.S. and Western companies – I come with one message:  Albania’s legal system is changing and a better business climate awaits you here.

How will judicial reform improve Albania’s business climate?  Allow me to give you six examples.

First, an ethical and honest judiciary will make sure corrupt prosecutors and judges are finally held accountable.  The days of dirty deals and justice denied are coming to an end.   A criminal justice system that is tough on corruption and organized crime will provide confidence to legitimate businesses that their interests will be protected.

Second, a reformed judicial system will enforce contract sanctity.  Foreign and domestic investors require certainty that contracts will be honored and enforced.  Investors must have confidence that they will be compensated for the sale of their products and services according to the terms agreed to by each party.

Third, a fair and independent legal system will encourage businesses to seek official registration, and deter disreputable actors from paying bribes to avoid their tax obligations.  Reputable investors strive to remain in compliance with the law and pay their taxes.  Yet business owners have complained that many of their foreign and domestic competitors—including the many companies that operate informally in Albania—do not pay taxes.  A reformed judiciary will help level the playing field for every reputable business operating in Albania.

Fourth, a fair and independent judiciary will ensure protection of real property rights.  Investors cite the chaos surrounding property claims as an example of how the legal system has deterred long-term economic growth in Albania.  In one typical case, a family was restituted a parcel of property, but was unable to finalize possession for more than 20 years.  Other claimants emerged later and, behind closed doors, persuaded judges that they should be awarded the land.  This back door practice of stealing other people’s property will soon stop.

Fifth, a professional legal system will ensure protection of IP rights.  Ideas and knowledge are a vital part of trade and investment, and investors require confidence that their intellectual property rights will be respected and violators will be brought to justice.

Finally, an honest and functioning legal system will ensure that corrupt officials will either think twice – or pay the price – for soliciting a bribe.  Corruption at ports and border control points is one of the most problematic factors for investors and international trade, and a problem that was cited in this year’s AmCham Business Index.  If corrupt customs officials won’t do their jobs, a reformed legal system will remove them to make room for reputable people who will.

The United States is confident that judicial reform in Albania will create a fair, transparent, and predictable business climate that is better for your businesses and for all American companies inspired to invest here.

Thank you and I wish you much success.