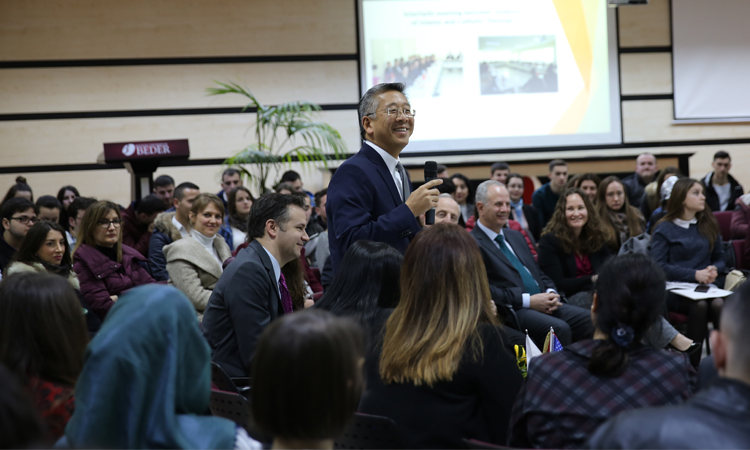 Good morning.  I am joining you today to say bravo to you about your work on promoting religious tolerance.  So I will begin with some comments about religious tolerance in my life and here in Albania.  Then I want to talk about Holocaust Remembrance Day in the Albanian context.  And finally, I would be happy to answer your questions and hear your comments.

How many of you come from families with parents or grandparents, aunts or uncles, who have different religions?

I come from a very complicated faith background.  My father who grew up as a boy in China was a Buddhist.  My mother and my older brother are Catholics.  My sister and I are Protestants.  My mother-in-law is Jewish.  My German brother-in-law is an atheist.  And I have lived most of my life in majority Muslim and Hindu countries.

The big question for my family is what faith to raise our children in.  The answer is that we will let them decide for themselves what religion they will follow.

I know, however, that we will raise our children to be tolerant and accepting of people of all faiths.  Part of the wonderful experience my children have had living in many countries around the world is that they have met people of all different faiths.

You as Albanians also have this wonderful possibility as well.  I am sure all of you have good friends who are Muslims, Bektashi, Catholics, Orthodox, Protestants and atheists.  It is one of the things that makes this country strong.

In the rest of the Western Balkans, these religious differences have resulted in war and suffering.  In Albania, this diversity of faith has resulted in the tremendous contributions by Albania’s religious communities.  People of faith in Albania have created great architecture, interfaith religious celebrations, organizations to serve the poor, and cultural connections with people around the world.

And Albania’s incredible tradition of religious tolerance also, of course, has a connection to the Holocaust and the protection of thousands of Jews who sought protection here during World War II.

My Jewish mother-in-law recently hosted in Memphis, Tennessee, a screening of the film “Besa”.  This film tells the story of thousands of Albanian families who risked their lives to project Jews during World War II.  It is also a film which discusses the Albanian cultural importance of hospitality and keeping their promises.  My mother-in-law invited Americans from the local mosque in her town as well as Albanian-Americans living in Memphis.  Your incredible story of the Besa has even helped to encourage religious tolerance in my country.

And today, we see religion in parts of the world, including Syria, Iraq, Burma, South Sudan and Afghanistan, being used to justify terrible violence and suffering.

I know that all of you will be part of the generation that ends violence that is justified through religion.  I know that you are already talking about how our many faiths strengthen our communities instead of dividing them.  I know that all of you stand against violence and will help convince other people that we are all – Muslims, Orthodox, and Catholics – the same in what we want for our families and our communities.

Thanks to all of you who have participated in the religious tolerance program and a big thanks to your professors, deans and rectors for encouraging your leadership of other young people.